The case for No-Feedback

The great thing about the climate science debate is you pretty much cannot have an opinion without pissing someone off.  If I say that "sensitivity" is low, well the warmists get bent out of shape and at the same time the nothing is happening crowd get aggravated that I "believe" there is any impact related to CO2.  Radiant physics are real, CO2 does allow the atmosphere to cool more slowly, but that doesn't mean every thing else has to remain constant.  There is a lot of stuff that can go on.

Since I have started focusing more seriously on the tropics, the real atmospheric heat source, and the long term persistent trend from the Little Ice Age, I figure I might need a touch of "proof" for my position.  There is no real "proof" of course, hence the scare quotes, only evidence. 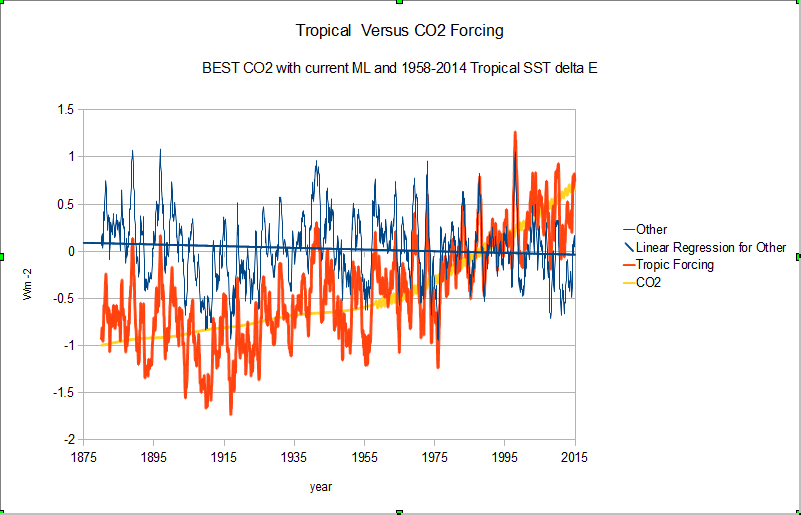 What I have here is some evidence.  Using the tropical ocean SST in actual temperatures instead of anomaly I calculated the change in "forcing" using the Stefan-Boltzmann law.  Since the tropical oceans as I am using them from 25S to 25N are 31.6% of the global surface area, I multiplied the 1958-2014 "tropical" change in energy, delta E, by the percent area to produce an estimated "forcing" value.  Along with that is a CO2 forcing based on 5.35*ln(CO2/CO2ref) using the BEST CO2 data udated with current Mauna Loa data from NOAA.  The difference Tropical Forcing minus CO2 is "other" forcing.  As you can see, "other" fluctuates around zero with a slight negative trend.  CO2 will have an impact in the tropics, really the majority should be in the tropics since that is where the majority of the energy is to be impacted.  You might think this is accidental, the rather close correlation, but it is what should be expected.  CO2 does have an impact, but that impact is very close to the no feedback sensitivity.  There is absolutely no evidence of amplification in this comparison.  Amplification by water vapor is supposed to multiply;y CO2 forcing by a factor of three.

Most of the amplification should be at the poles or really the northern pole.  Most of that is in the Arctic winter when advected energy is for the most part lost to space.  CO2 doesn't have a strong radiant impact at temperatures below -29C and in fact tends to have a slight cooling impact at those temperatures.  The increased advection of moist air poleward will increase precipitation, mainly as snow likely leading to additional accumulation provided the snow remains fairly clean.  Black carbon and dirt reduce the snow albedo allowing greater melt.  While human industry and agriculture can decrease snow albedo, nature also can do the same thing so that is another issue for another day.

Now this isn't convincing evidence since it is only a rough estimate of change in long wave radiant forcing, but it is just another "coincidence" that was predictable based on my less than consensus scientific approach.  If tropical clouds and water vapor were a positive feedback to CO2 forcing you should "see" it in the "other" residual.  Not there is it?

These conditions should lead to a new Ice Age, but in order for that to happen there has to be somewhere to store that ice.  Ice is easy to get rid of thanks to the albedo situation, so don't freak out and start hoarding wool blankets or space heaters just yet.  The Holocene may end up being called the Anthropocene since it could last as long as man is around.  Of course it would take only one large asteroid to change things back to "normal" as in no human impact.

I seriously doubt that this will sway opinions of either the warmista or the disbelievers, but it is a fun part of the puzzle, at least for me.