Deep Convection, the seriously bad ass thunder storms are a part of my life on the water and one of those question marks in Climate Model scenarios.  I ran across a GFLD paper a while back that I unfortunately cannot find at the moment that discussed convection triggering temperatures over land based on available soil moisture.  That paper used 27.5 C as the trigger temperature but the few marine based studies I have seen are using >28 C degrees.  It is only a half degree, but both seemed low in my opinion.  Down here I don't have much t'storm issues around 82 F surface water temperatures and even joke about not diving if there ain't an 8 in front of the temperature.  Around 85 C I tend to have my hands full dodging storms, unsuccessfully a bit more often than I like, So I was thinking 29 C would be the go to number.  The more open oceans rarely get over 30 C without hammer head clouds building like crazy.  Average, SST for the tropics tends to be currently in the 27.5 C range and there is evidence of increased cloud feedback, so I am a bit more impressed with the GFLD number after that consideration.

So in addition to instrumental temperatures and the Oppo 2009 IPWP reconstruction I often use, this Solar orbital cycle thing kinda forced me to do some stuff I had been putting off. 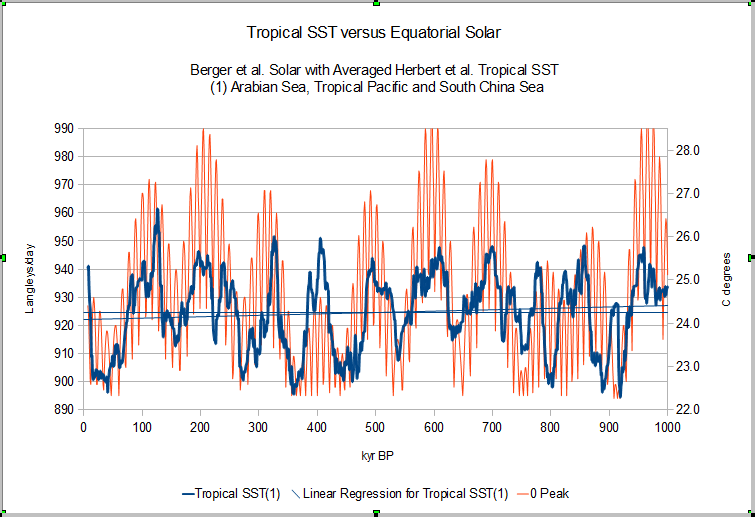 This is an extension of the tropical temperatures by close to a million years.  The "average" temperature is about 24.2 C and the control or triggering temperature average appears to be about 25.5 C.  Since that "average" is over about 1000 years roughly, a more "realistic" tropical mean would be in the 27.5 C range.  If that is the case, the way I have the solar insolation could be about right, meaning clouds limit temperature, increased clouds would increase pole ward advection of moisture which would increase high latitude snow, building glacial expanse, etc. etc.

That is just a guestimate though and the numbers on the chart are questionable.  They do provide a rough reference though.  The Langleys/day aren't something I normally use but were used in the Berger et al. Solar cycle construction.  You can divide by two to get a ballpark of Wm-2 change, but I am using peak, not average, so an average fan might want to do it hisself.

In either case, this orientation of solar and my quick and dirty combination of the Herbert et al. 2010 data as noted, would indicate cloud regulation of SST as being pretty likely.  I will revisit this reconstruction in the future as I will revisit this one. 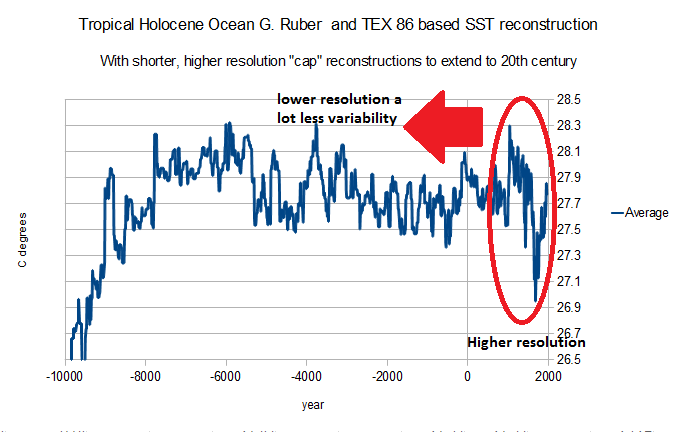 This one uses over a dozen of the Marcott et al. 2013 Holocene recon which I have modified for a "tropical" perspective.  It is unfinished so I am not going to dig out all the attribution stuff again at this moment,  Marcott et al. supplemental data is just a Google way. This indicates around 28 C as a tropical SST Holocene "norm which is comforting to me as it is.  Comforting to me is an indication of my current confirmation bias that I will have to check later.

So I would guess that cloud regulation starts around 27.5 C and really kicks in around 28.5 C. Looking back at the million year reconstruction you could add 2 to 3 degrees to the values Herbert et al. came up with.  That is not a slight of Herbert et al., the same ocean cores they use are sometimes used for mid and bottom water temperature, so their values may be closer to thermocline temperatures than real "surface" temperatures.  One of the issues I have with instrument SST records is that the "absolute" temperatures recorded by ocean engine raw water intakes can be a degree or so lower than the surface temperature the sky "sees", that skin layer issue.

The Reynolds oiv2 tropical SST data shows about the same 28 C peak from the 1980s.  So climate models might use >28 C for a "control" aka triggering temperature.  Actual local temperatures would vary of course, but it seems like the right number.


The red line charts are from Climate Explorer in case you are wondering.


Now that is all great, we have a control range for one thing.  What about other stuff? 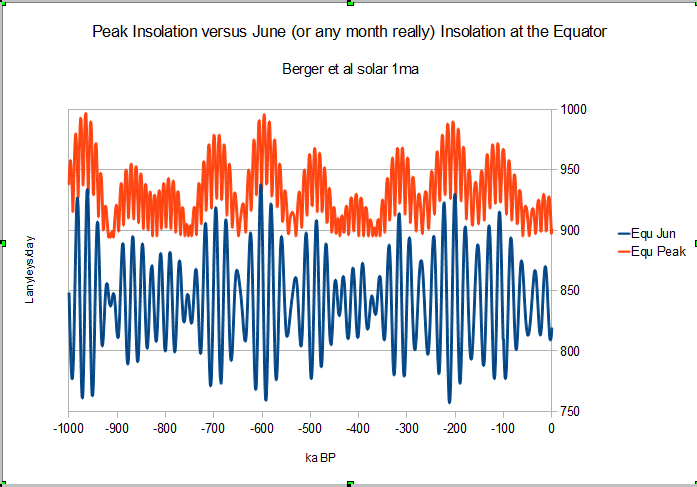 Besides the nice smooth rectified tropical energy envelope you have occasional spikes.  I used Equator June but you could pick any month at any latitude to figure out which spike causes the most grief.  Biological and Glacial Mass for that matter are a PITA.  Instead of simple too much or too little you can have too much just right.  Biological organisms can reproduce themselves out of the game.  Glacial mass can get too heavy.  Because of this you can develop a few dozen possibly hundreds of fairly valid theories.  Every damn one will have some exceptions.  Every damn one that is carefully put together will have some validity.  To model "everything" correctly you have what would look like a simple equation with constants that aren't really constants.  They would be deceptively complex partial differential equations with each factor considered with respect to every other factor at every possible "critical" point.  You can simplify most but there are critical levels where at least one that is normally insignificant rears its ugly head.

You can call that Chaos or get a grip and call it reality.  An Earthquake or Volcano caused by glacial mass distorting the Earth's crust is  just one of those normally insignificant details.  Iso-static rebound triggering Earthquakes and Volcanoes that cause abrupt cooling and the growth of glacial mass another of those typically insignificant details.  Massive algae blooms depleting oxygen and producing so much sulfur compounds that everything croaks, another minor detail.  Trust me, there is plenty of job security in science.


Update on the South China Sea. 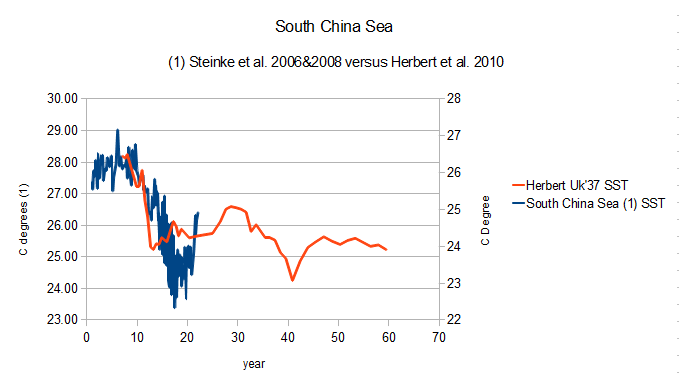 Steinke et al. have two 2006 and 2008 submissions on the South China Sea.  There are always dating issues and the UK 37 issues with the bugs being on the "surface" and currents changing etc.;  Their work may indicate that Herbert et al. 2010 has one or both of the issues.  28C makes more sense because of convective trigger, at least to me, so if I do "adjust" Herbert 2010 for a long term tropical reconstruction, this is what I will probably use for the South China Sea part.

The Eastern Tropical Pacific is more of a challenge due to ENSO impacts on currents.  For the Indian Ocean/Arabian Sea portion there appears to be plenty of reconstructions.  The Atlantic will have about as many issues as the Eastern Pacific.
Posted by Unknown at 7:18 AM