Tropical SST versus the Model Mean

In this latest series of thoughts I am focusing on the boiler of the climate engine, the tropical sea surface temperature.  Clouds help regulate the SST, especially in the tropics where there is enough solar energy available to nearly boil water.  One of the most inconvenient truths, hidden most often by use of anomaly rather than actual temperature, is the models don't "get" reality. 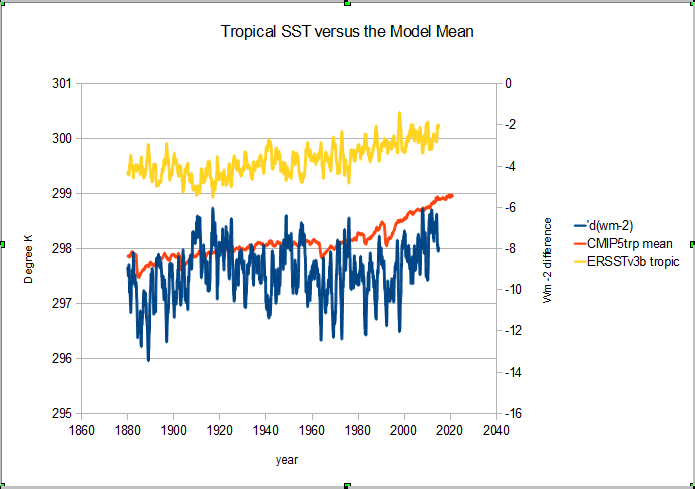 This chart compares the tropical SST with CMIP5 model mean in absolute temperature.  The model is supposed to represent the lower troposphere land and ocean so there would be a difference, but 2 K is a pretty large difference.  The tell of the tape is more in the effective energy difference d(Wm-2).  The negative spikes in the orange model curve are volcanic forcing events.  The atmosphere intensive models over estimate initial impact and miss the majority of the lagged response.  Since the slow down in warming started getting attention, a number of modelers have "initialized" tropical SST regions to match observation and are making "discoveries" like "sensitivity" isn't quite as high as previously expected among other things.  For those that never assumed the "all other things remaining equal" especially clouds line, this isn't very surprising.  Trying to "project" climate on a water world would have to start with an ocean or AQUA intensive model.  Not an atmospheric model clinging to coarse A$$trophysical estimates and assumptions.

The SST is always warmer than the troposphere and the "average" ocean temperature so mixing efficiency, closely tied to ocean heat transport and atmospheric weather patterns can make relatively large changes in the "average" lower tropospheric temperature.  Because of the huge range of lower tropospheric temperatures from roughly -89C to +50C, temperature anomaly is a piss poor proxy for actual energy.  The ocean temperature ranges from roughly -2 C to ~30 C with the "global" average close to the mean making it a more thermostatically sound proxy for energy.  You can look up the Zeroth Law of Thermodynamics and puzzle that one out yourself.  You can also convert temperature to approximate Wm-2 and try a few averages of extremes to get the picture.  Anomaly is great for some things, but when water and enthaply are involved, not so much.

By "initializing" SST to observations the models would perform better because they would include more accurate approximations of total enthalpy.  That is a huge help, but it doesn't resolve the poor results of the models with respect to Volcanic forcing and SST response.  Since the oceans have about 1000 times the heat capacity of the atmosphere, the ocean can "make up" atmospheric energy deficits for very long periods of time.  A 1 Wm-2 imbalance for example could take several hundred years to reduce "average" ocean energy by 5 Wm-2 effective energy or about 1 degree C.  An imbalance would cause a change in the ocean mixing efficiency and since the SST is always greater than the lower troposphere surface temperature and the "average" temperature of the oceans, simply divert energy flow to the region most impacted by the negative forcing.  Ocean heat transport is slow compared to atmospheric heat transport so lags of greater than decades are not unreasonable.  With very long lags, thermal equilibrium is a bit of a joke.  A number of ocean modelers with the GFDL have noted the huge impact of ocean heat transport and shifting of the "Thermal Equator" aka the Inter-Tropical Convergence Zone (ITCZ) on "Global Mean Surface Temperature", the poor climate metric of choice.

Changes in Zonal and Meridianal ocean temperatures have interesting equalization paths thanks to the Coriolis Effect isolating the hemispheres and land mass distribution creating effectively three somewhat isolated major ocean basins, the Northerly Atlantic, Northern Pacific and the Southern Hemisphere oceans.  There is roughly a 1:2:4 ratio of heat capacity in these basins which can produce an interesting range of oscillations.  The atmospheric dominate models don't quite  "get" the potential of these oscillations.  J. R. Toggweiler would be a good Google for anyone interested in the potential impact of the "Shifting Westerlies" and "Thermal Equator".

For climate models to reasonably reproduce Volcanic and Solar forcing response, they need to consider the exceptionally long lags that these basin oscillations can produce.  Many atmospheric modelers are still in stages of denial of the "pause" and the huge misses on absolute temperature.  They may need to use a lifeline and phone a friend soon if they have any left.