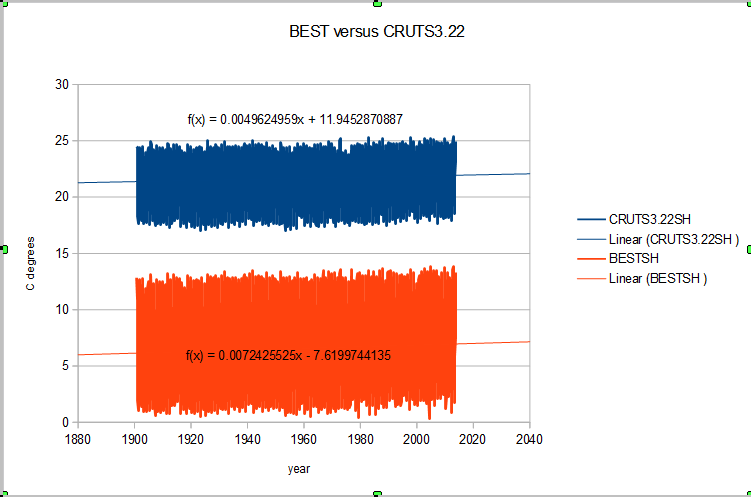 The biggest difference between BEST and CRUTS3.22 is the southern hemisphere because of Antarctica.  There is only Antarctic data starting in around 1950 and it is pretty rough.  BEST tries to make the most of what data there is but the south pole is what you might call a tough corner.  It doesn't have any peers to compare with so any interpolation including kriging is going to have a tough time.  CRUTS3.22 doesn't even give the southern continent as shot.  The climate research unit product is useful for determining things that need real number not anomalies like the data of first frost.  Antarctic is in perpetual frost, so that is a waste of time for the CRU product.  Since the Antarctic is about 14 million kilometers squared of the nearly 49 million kilometers squared of land area in the southern hemisphere is carries a lot of weight. 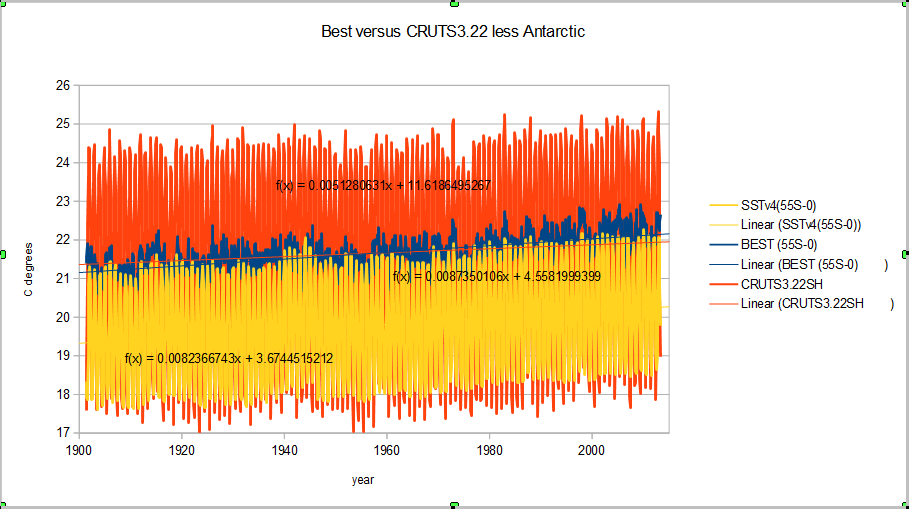 If I cut out the Antarctic by limiting the comparison to 55 south, the actually temperatures show that the oceans are in the drivers seat.  Best which long range interpolate as needed, that is a feature of kriging, track SST extremely closely while CRUTS3.22 provides more weight to local temperature.  One isn't particularly better than the other, they have two different functions.  Since the average temperature of the Antarctic is around -35 C degrees, you have the large difference in southern hemisphere land temperature.

Well here is the energy issue.  Antarctica has an average elevation of over 2000 meters.  It should be about 2x9.8 = 19.6 degrees colder than the surface due the dry adiabatic lapse rate.  If you are estimating the southern hemisphere's "surface" energy do you use actual temperature of "potential" temperature?  If you are in charge of the agricultural department in Paraguay, do you use BEST or CRUTS3.22?  You have to chose the one that best fits your intended purpose.

On the whole BEST is a great product but it doesn't fill every bill.  Its uncertainty is a "global" thing and its purpose was to double check other "global" products.  Even though BEST has regional and local "products" you need to be a bit "skeptical" before blindly passing judgement based on BEST all by itself. 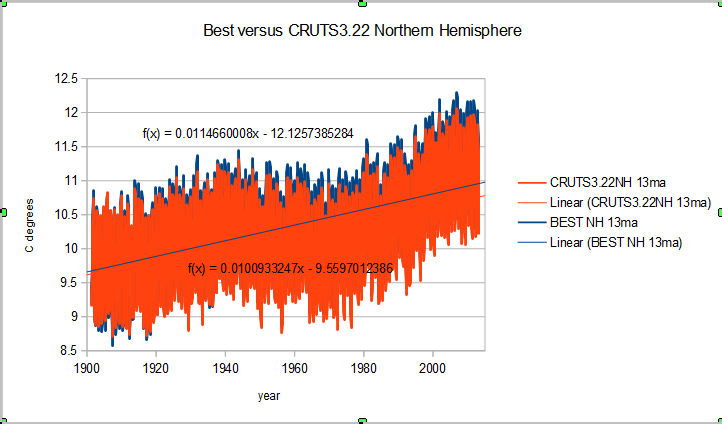 In case you were wondering, BEST and CRUTS3.22 are agree more closely, but BEST does show a larger warming trend.  Average land elevation in the NH is about 680 meters so there would be a potential temperature consideration there as well.  So like I said in the last post on "global" surface temperature, ignoring land and using just the oceans would reduce uncertainty in energy related calculations.