Timing, it is all about the timing


Continuing with my curiosity about some of Greg Goodman's choices, let me give you some more background.  There is a definite ~27 month lag in tropical SST response to solar variation.  There is an obviouse reason for there to be a lag, the ocean have large heat capacity i.e. thermal inertia and there is a 40Wm-2 variation in seasonal solar insolation.  "Annual" for us is not the same as annual for the ocean.  The sun crosses the equator twice a year and hits each tropic once a year.  If you want to relate the energy to tides, the equator has a semi-annual tide and the tropic limits a di-annual tide.  You end up with a mixed semi-annual energy "tide" that can have a bit complex "cycle".  The 27 month lag is then not written in stone, it can vary, but 27 month is the best fit for the satellite era data.

Just about everyone that "plays" with removing this or that climate phenomenon, ENSO for example, assumes a "normal" which is fine, but they rarely back track to see what impact "abnormal" might have on their estimates.  That would produce an undocumented uncertainty. 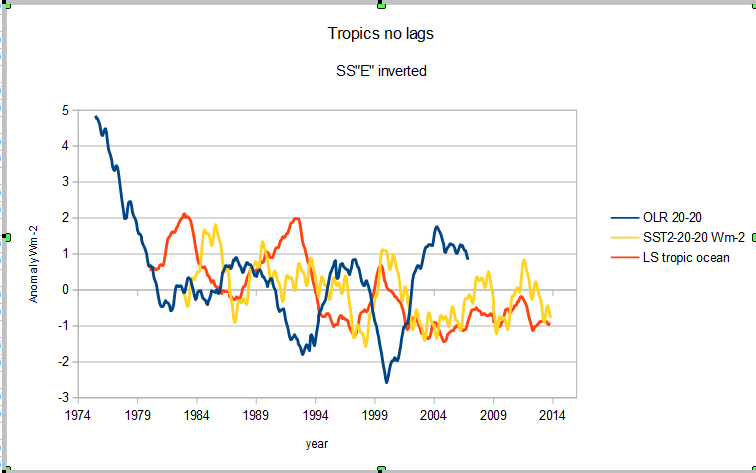 Most of the climate data you really would like to have is pretty limited due to the satellite era and changes in the "platforms".  For the tropics I have the estimated Outgoing Longwave Radiation (20S-20N) anomaly (climate explorer), the UAH Lower Stratosphere estimated energy anomaly assuming 211.2K is the average temperature and the tropical SST (climate explorer) energy anomaly inverted.  A quick eyeball indicates more out of phase than in phase action. 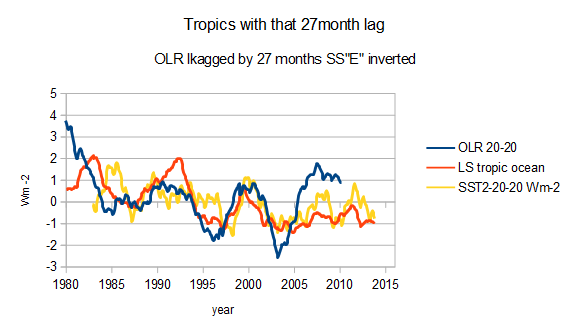 Lkagged (yep typo) or lagged by 27 months, the OLR fits a bit better.  There is a small lag, ~60 to 90 days in the Lower stratosphere, "normally" say after 1991 but not a great correlation. 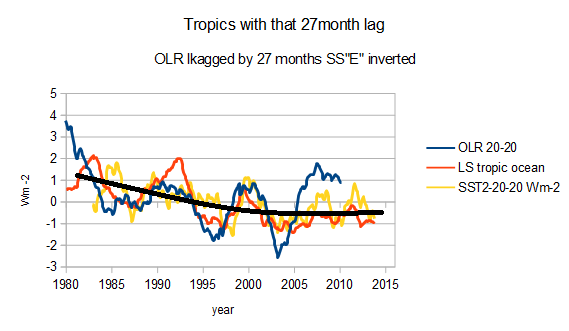 Even with all the data limitations, there is a fairly obvious "approach" curve in that data.  That would be approach as in "equilibrium" or "steady state" or "Happy Place" since there is no indication that equilibrium or steady state are all that meaningful when you get down to gnats' ass precision.  There is a range of Happy with some things like OLR not as happy as SSE, but the biggest dog, that would be the one with the largest inertia, will win the day.  If you want to improve your precision for the little dogs, you would need to figure out the big dog first.

Removing ENSO would be like completely ignoring the big dog.  That could let the big dog bite you in the butt.    So Greg is repeating the mistakes of the other big dog ignore(rs) to highlight their limitation but in the process limiting himself.  That may be the way "science" works but it is a painfully slow process.

In a "normal" world, showing the climate models are less than adequate should only require this. 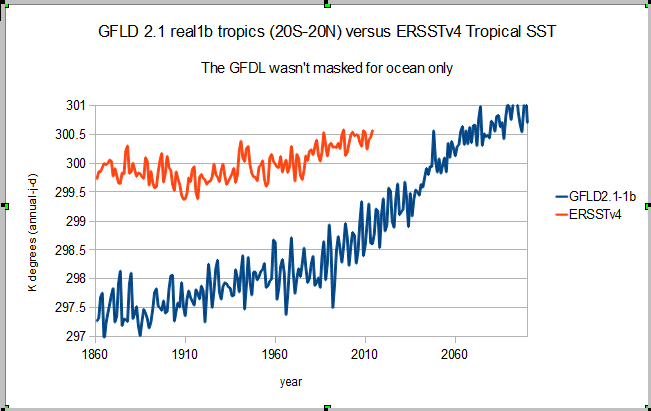 The models grossly underestimate SST, go back and fix that then we can talk.  We live on a water world dumbass.  Once you get that, then we can talk about all the little crap you find important.

Instead there is this endless debate on trivial in respect issues like aerosol optical depth and the temperature anomaly up a polar bears butt.
Posted by Unknown at 7:46 AM