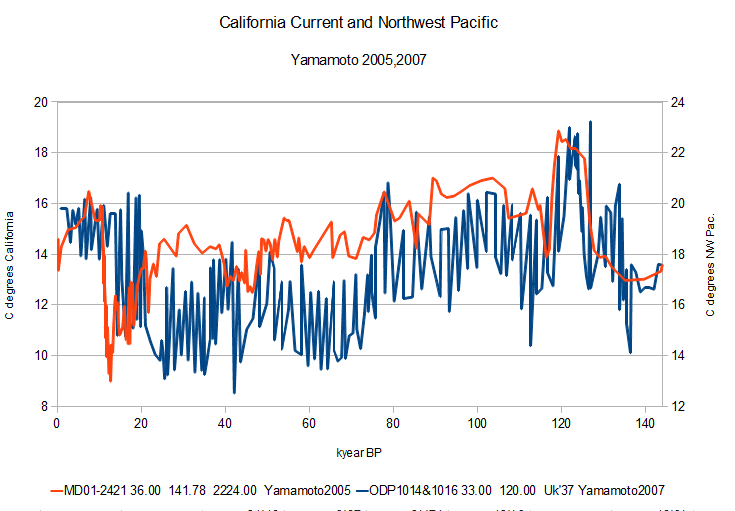 Yamamoto 2005 and 2007 are reconstructions of the California Current and an area off of Japan SST. For Pacific Decadal Ocsilation fans this might be interesting.  There is a pretty big difference between the exits from the last glacial maximum with the California coast leading the way by about 8ka.  Something similar appears to have happen during the previous de-glaciation except with a step rise part out and part in phase.  The California reconstruction I have ploted is just the combination of the two Yamamoto archieved.  The lat/long 33N 120 W(yes I missed the sign) is just a rough average of the two cores. 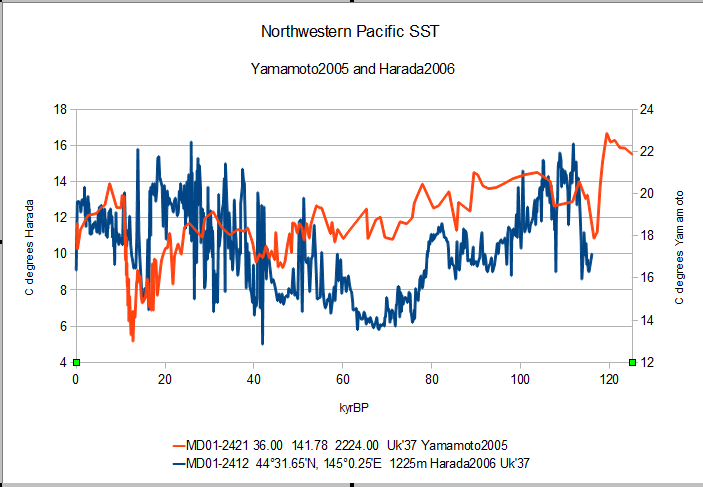 Harada2006 archieved a SST reconstruction north of the Yamamoto2005 core.  You can see a little in and out of phase action there as well.

The point of this post isn't so much SST but the complex lead and lags between regions as currents vary with warming or cooling.  2 to 4 degree swings in SST are more the norm than the exception when enough data is collected.

So when I see a once august US Government agency, the National Oceanographic and Atmospheric Administration endorsing completely unbelievable crap like this, I have to wonder if there is a complete lack of intelligence or political motivation behind the bullshit.

That cartoon is based on the Marcott et al. 2013 Holocene temperature reconstruction.  Skeptical groups and even the original authors have pointed out the limitations of the reconstruction, but our reliable agency NOAA is using it to show the world just how serious US science really is, yep it is a joke folks.

If you want to know about "Why the "Alarmists" love Marcott" just follow that link.  Remember, these are our bestest and brightest so our future is looking a bit bleak.
Posted by Unknown at 7:24 AM