Greg Goodman has a guest post at Climate Etc on determination of tropical feedbacks.  I don't really have an opinion on his post at the moment, but he mentioned Lower stratosphere temperatures "Although there is noticeable change in stratospheric temperature as a result of the eruption, the heat capacity of the rarefied upper atmosphere means this is negligible in this context."

The stratosphere, rarefied or not responds to variations in energy flow and is more sensitive because it is rarefied.  To some that is "noise" to others that is information.  If you are in the information group, then comparing energy to energy is better than temperature to temperature. 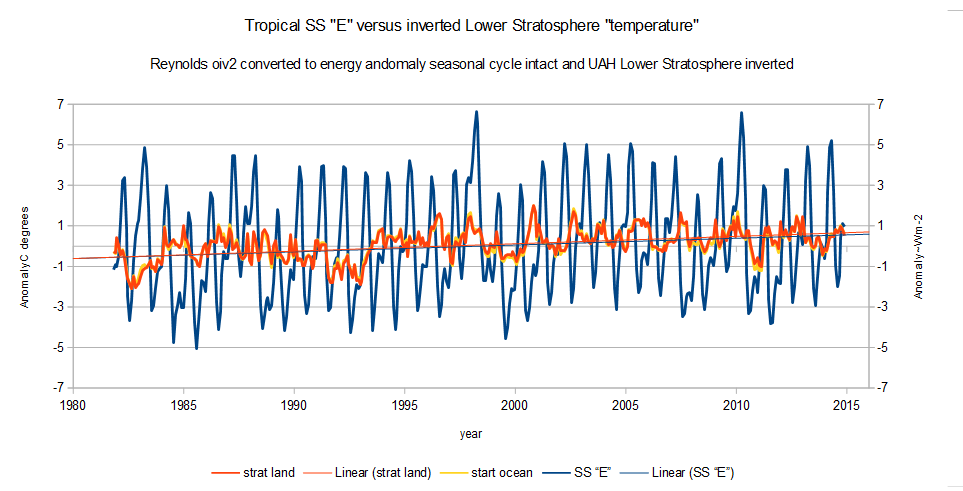 Using the Renoldsoiv2 SST data set for the tropical oceans, 20S-20N which is in C degrees, I calculated the equivalent energy using the S-B equation leaving the seasonal cycle.  This gives you an idea of how much the surface energy changes with respect to lower stratosphere temperature. 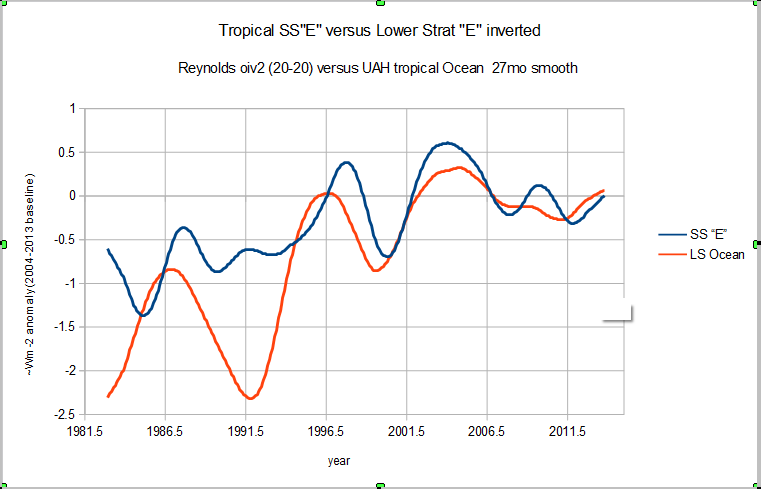 Now in this one I converted the lower stratosphere temperature into an energy anomaly using 211.5 K as the 2004 to 2013 average temperature.  That just produces bigger wiggles, so then I used a cascading 27 month filter to smooth things out.  Pick a different filter and you will change the relative peaks, but I use 27 month because it is close to the QBO frequency.  This filter shows that the Pinatubo effect started years before the eruption in 1991.5.  Well there was an eruption prior to Pinatubo that may not have work its way out of the system yet.  Pinatubo had to have an impact, but where is it? 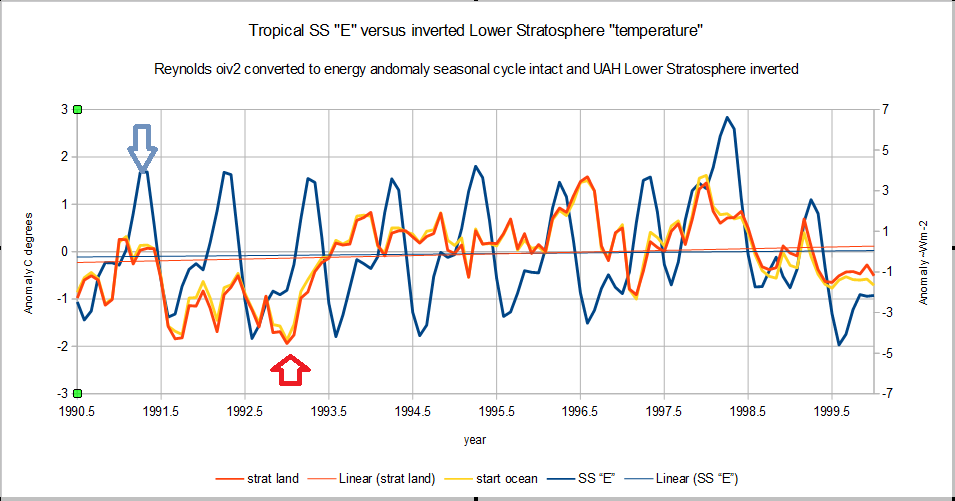 If I enlarge the first graph you can see the down slope starts prior to Pinatubo and is related to the annual solar inspired variation in SST.  Notice that the up slope in the LS started about a year and a half after the eruption.  Also notice the stutter step in the annual SST cycle about every NH winter. 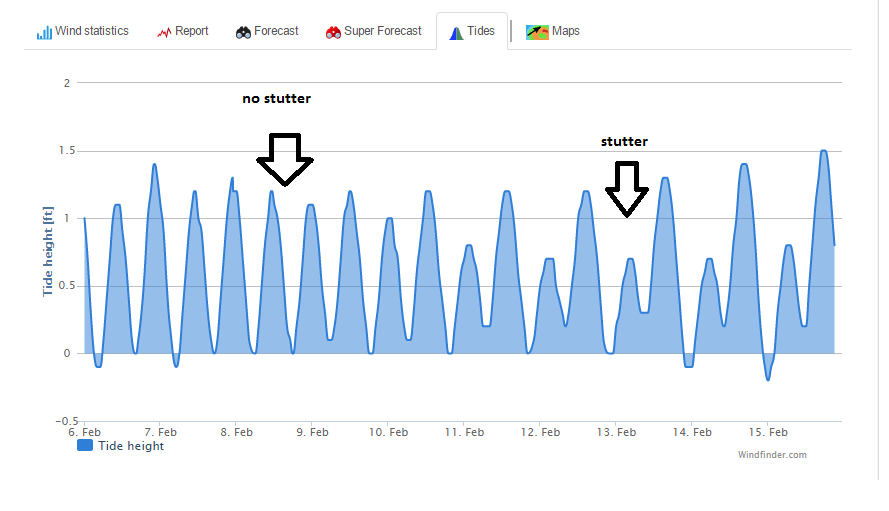 Those stutters are related to tidal variations.  This chart is just a weeks worth of tides for my area and they are driven mainly by lunar forces, the tropical sea surface temperature/energy would be an annual solar related "tide" stutter.  If you had daily data you could probably tease out the lunar stutter. 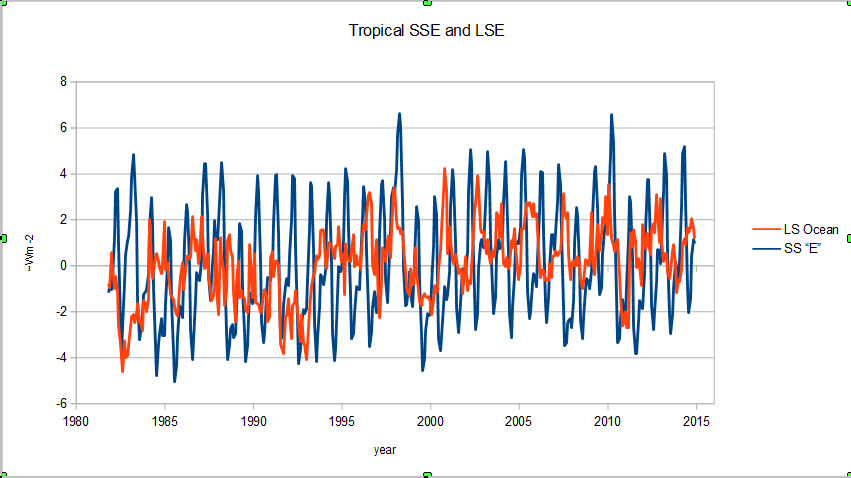 The atmosphere has tides as well so it would also have tide stutter.  If you eyeball the stutters in blue and the stutters in red, sometimes they are in synch, sometimes not, but they both stutter.   Depending on what time of year a volcano erupts it may be in phase, inertial boost or out of phase, inertial damped.  If you remove seasonal cycles when making your anomaly you remove most of the stutter, which is information in my opinion.
As I said, I have no opinion of Greg's post, but I think blowing off the stratosphere is a bit rash.

Update: Well I guess is happy with what he has.  Personally I think less anomalizing and smoothing is a good thing.  Since I have done a bit of looking at the tropical startosphere in the past I thought I might as well add another relationship to solar. 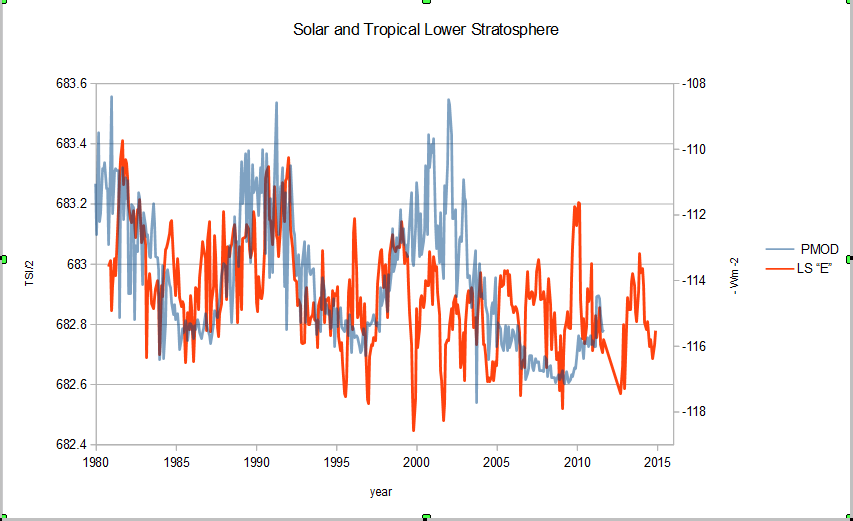 The stratosphere is a bit unique in how it responds to the surface energy and solar energy.  This compares the PMOD solar downloaded from Woodfortrees with the UAH tropical lower stratosphere.  Greg mentions that the relationship changes following Pinatubo in his analysis.  Well it does, it goes from being more strongly related to solar to much less.  Pinatubo not only happened to hit following a down slope in the annual SST it also happened to hit a down slope in solar.  Cloud cover is generally credited with the shift, but we have a lot of confounding factors.

Another one is that mystical 28 C convective trigger.  Pretty much every time the SST in the tropics exceed 28 C, there is a larger than normal reduction afterwards.  These pops and drops, El Nino events happen most often during solar minimums.  There is not a huge change is solar intensity so there is always more than enough energy to produce an El Nino, so there is likely some internal response driving the events.  I have no insight into what that combination might be, but it appears to be related to orbital/tidal phenomena.   Deep convection of course messes with stratospheric ozone and water vapor just to add some more fun to the puzzle. 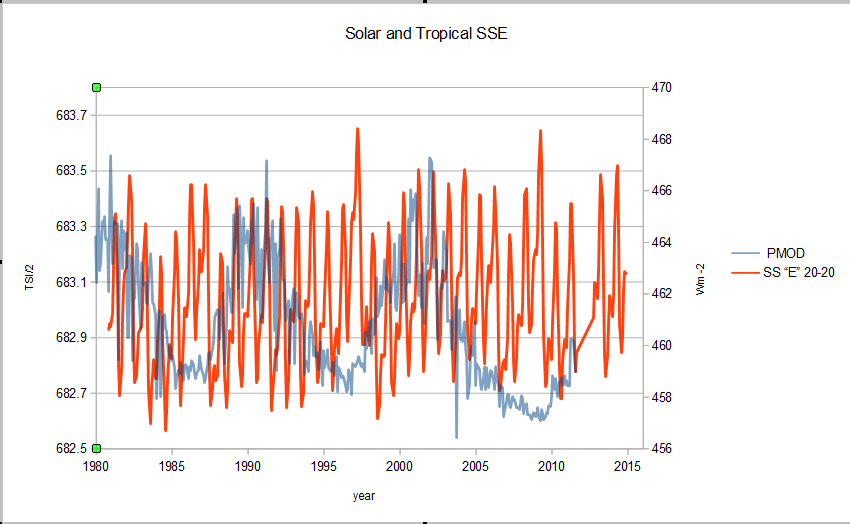 The SST correlation with solar is of course absolutely abysmal from an energy stand point, but the stutters do have more of an organized pattern on higher parts of the cycle.  Not exactly and Ah Ha! moment, more of a tease.  The PMOD data at Woodfortrees hasn't been updated in a while but you should be able to get the drift.

In any case, there is a heck of a lot going on but solar/orbital is starting to look a bit better during this slow volcanic phase.  If nothing else, Greg's analysis should show there are a lot of  challenges in climate science.
Posted by Unknown at 7:54 AM