This looks like it will be it.  If you go back through my last few posts you will see the various reconstructions used and how I scaled mainly UK'37 reconstructions to MG/Ca reconstructions to get a rough estimate of peak tropical SST.  Due to upwelling and shifts in westerlies, the eastern Pacific and eastern Atlantic have large temperature swings.  Peak temperatures though tend to have a more predictable range due to the convective triggering temperature of about 28 C.  Prior to 1 million years ago there appears to be less cooling during glacial periods while the rough glacial frequency was ~41ka.  With Tropical SST dropping slightly over the past few million years, the frequency shift to ~100ka.  With warm oceans needed to provide the moisture to build glacial mass, it likely takes longer to create a glacial maximum that can be "abruptly" changed in order to have an inter-glacial period. 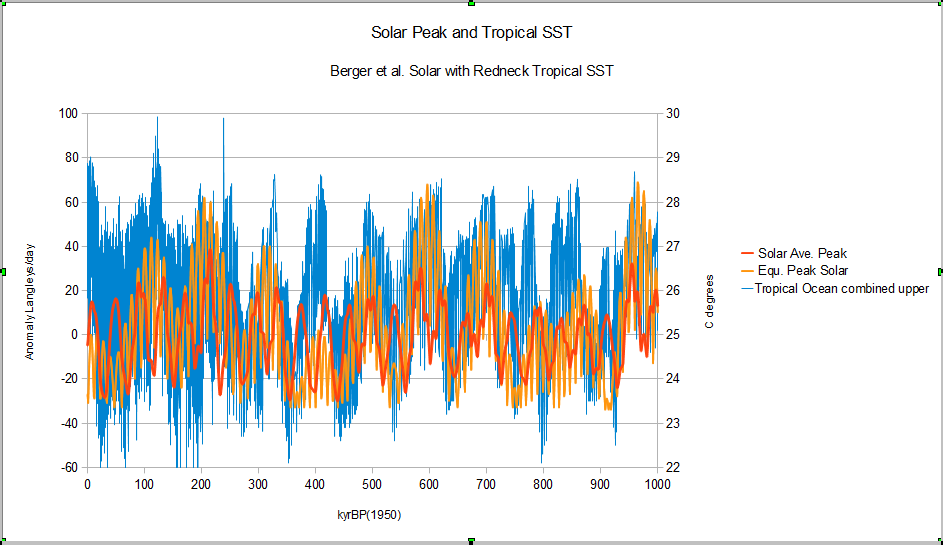 Since I only have the Berger et al. solar reconstruction of 1 million years, here is the peak solar for the equator and average for the globe.  Peaks generally would drive abrupt changes.  Peak solar at 65N would tend to trigger glacial melt,  Peak solar at the equator would tend to produce super El Nino conditions including increased precipitation needed to build glacial mass if snow or melt glacial mass if rain.  Since there can be two triggers, you don't have a high correlation other than tropical SST over 28 C tend to precede glacial periods.  The current, 400ka and 800ka periods stand out as least correlated with solar.  Even those though have a weak solar peak that could trigger a climate shift.


The lack of a consistent correlation is an indication that internal variations of cloud cover and/or ocean/atmospheric circulation have considerable influence on peak tropical SST.  The most difficult in my opinion is the Chilean Current. 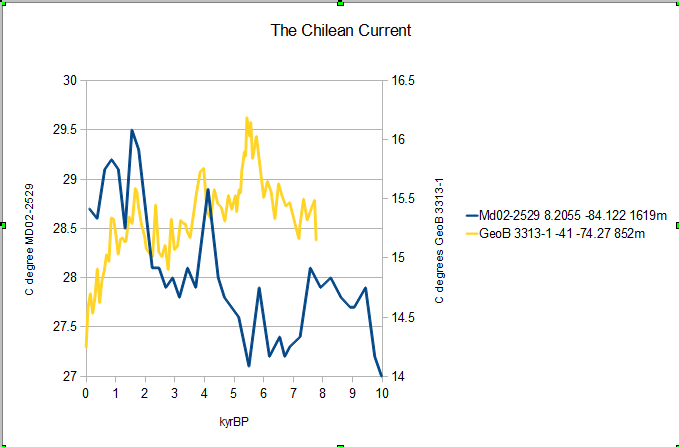 The GeoB core data was provided by  Lamy, F., C. Rühlemann, D. Hebbeln, and G. Wefer, 2002, which I download from NCDC.  The dating I have may not match their interpolation by should be close enough.  The temperature peaks about 6 ka BP.  The other core was published by LeDuc et al. 2007 which also had a comparison of Mg/Ca with Uk'37 temperatures. 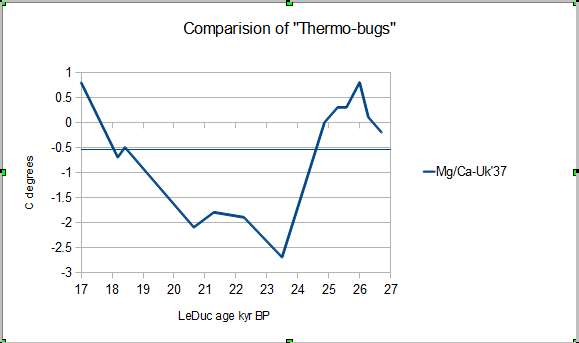 The "Thermo-bugs" can have a pretty large discrepancy due to current influences as I have mentioned before.  So the temperature variation indicated in the Chilean Current is likely not all that accurate, but a good indication of current variation anyway.  Just take the temperatures with a grain of salt and focus on the variability.  Lamy and company did a lot more that just temperature reconstruction as noted in their abstract.

"We reconstruct changes of paleotemperature, -salinity, and -productivity
within the southern Peru-Chile Current during the last 8,000 years from a
high-resolution sediment core recovered at 41°S using alkenones, isotope
ratios of planktic foraminifera, biogenic opal, and organic carbon.
Paleotemperatures and -salinities reached maximum values at ca. 5,500
years and thereafter declined to modern values, whereas paleoproductivity
continuously increased throughout the last 8,000 years. We ascribe these
long-term Holocene trends primarily to latitudinal shifts of the
Antarctic Circumpolar Current (ACC). The concurrence with shifts in the
position of the Southern Westerlies points to a common response of
atmospheric and oceanographic circulation patterns off southern Chile.
Millennial to centennial-scale fluctuations of paleotemperatures and
salinities, on the other hand, lag displacements in the position of the
Southern Westerlies but reveal a significant correlation to short-term
temperature changes in Antarctica indicating a high-latitude control of
the ACC at these time scales."

These shifts or swings in Southern Westerlies on various time scales are yet another indication of climate variability that tends to be smoothed out by some multi-proxy methods resulting in what should be obviously "over optimistic" uncertainty margins, but they are still embraced by agencies that should know better.

Like NOAA WTF NOAA in this laughable article on What's the Warmest the Earth's Been Lately.  I find it pretty amazing that the Tropical Oceans provided the majority of the energy required to produce the "warmest the Earth has been lately", but there aren't any seriously researched tropical ocean temperature reconstructions.  What we have is cartoon science.