There is a big difference between what is actually considered in the climate models, the real world and the blog debate world.  In the climate models, simplifications allow for faster calculations and more model runs.  The models are going to be wrong, but the average of a large number of runs should produce something close to reality, the real world.  In the blog world, everything gets confused and various assumptions are taken as fact.

My insinuating that the climate scientists missed 65 Wm-2 is a pretty big deal.  One of those things that is unbelievable.  Scientists just can't make that kind of mistake, or can they?

My Static Model and the Carnot Divider indicates that the upper surface that need to be considered is near the turbopause at an altitude of 100 kilometers.  The turbopause area is ~526.2 million kilometers squared or 3.2 percent larger than the actual surface area, 2.8 percent larger than the turbopause area and 1.6% larger than the Stratopause area.  "Surface" energy would have a decreasing impact depending on the relative area of the atmosphere "shell" or layer it is impacting.  Solar energy absorbed in the atmosphere would have an increasing impact on the surface radiant energy balance depending on the different areas of the relative "surfaces".  Pretty simple, you just have to adjust for area differences for the "shell" or "surface" and the energy source.

So let's look at the impacts.  For the TOA column, the 1361 is the Solar constant.  Notice that at the sea level surface, the constant is constant.  At the Tropopause, the constant would 1365.28 Wm-2 which is the former solar constant value.  For the Surface column, 334.5 Wm-2 is the effective energy of the oceans based on the "average" estimated temperature.  At the Stratopause, the 339.77 is the estimated "average" energy available at the TOA before albedo adjustment.

Since I am looking for a 65 Wm-2 mistake related to the Turbopause, the difference between the turbopause TSI and the seal level surface TSI is 43 Wm-2 and the OLR from surface to Turbopause is 10.5 Wm-2 which combined is 53 Wm-2, close to the 65Wm-2 considering all the uncertainties. 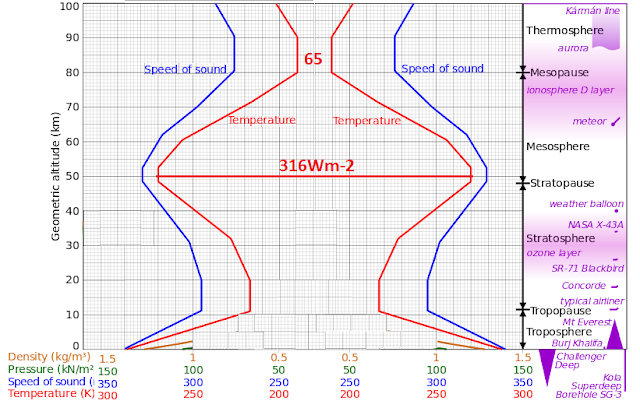 I borrowed the atmospheric profile from Wikipedia and did some cut and pasting to show a mirrored profile from the surface to the Karman layer.  The average temperature of the stratopause is about zero C degrees which has an effective energy of 316 Em-2.  Up in the chimney is 65 Wm-2, the effective energy of a surface at 184K degrees.  Using these references and adjusting for the difference in areas I may be able to locate the error, if it does exist, in the atmospheric energy absorption estimates where I had already found an 18Wm-2 in the earlier K&T energy budgets that just got revised this year.

This is just a status report.  It would be nice if some of the people that get paid to do this work would own up the mistake.  Don't hold your breath though.