For Lucia's Crew - What is a Black Body Cavity?


A black body cavity is any energy source where the temperature of that source can be accurately approximated with the Stefan-Boltzmann Law.  That definition varies a bit from others, but it is the bottom line.  If the black body source is less than ideal, then you have to consider individual elements and their radiant spectra to adjust for the less than ideal source.  Depending on the level of precision that your application demands, you can assume "ideal" behavior as long as you remember the degree of uncertainty.

Pretty simple for most radiant physics/climate science geeks, there is uncertainty that needs to be considered whenever assuming ideal conditions.  ASSUME is the first real law of thermodynamics.

If you consider what makes a good black body cavity, the first thing would be consistency or stability.  The black body cavity is a reference, if your reference is noisy the adjustments for "less than ideal" behavior become more complex.  If you want to simplify the problem you pick a stable FRAME OF REFERENCE (FOR).  FOR is the second real law of thermodynamics.

By selecting a stable FOR and avoiding ASSUMEd precision that may not exist, you are following the first and most important real law of thermodynamics, KEEP IT SIMPLE STUPID, KISS.

There can be several volumes published on the different factors that have different degrees of influence on the "average" temperature of the oceans aka black body source.   For now just consider that the oceans have an "average" temperature and that there is an "average" ice free ocean area.  With that average temperature equal to 4C (334.5Wm-2) and the average area equal to 360 kilometers square or 71 % of the total "surface" area of the globe, the "average" energy at any arbitrarily selected altitude would be equal to 334.5 Wm-2 times the ice free ocean area divided by the area of the arbitrarily selected "shell".  If we select a "shell" equal to that total sea level surface area of the Earth, then the effect radiant energy at that "shell" would be 334.5 time 0.71 equals 236 Wm-2, that is the FOR selected by climate science convention.  What about that other 29%?

Since the "land" is not symmetrically distributed, the ocean internal energy would not be uniformly distributed and with a rotating black body source, the hemispheres of the spherical source would be somewhat isolated by Coriolis effects.  Even with all this to consider, there is still an "average" energy of the oceans and an "average" energy of any arbitrarily selected radiant "shell".  By selecting a less arbitrary "shell", one that is more stable and uniformly distributed, like say the Turbopause, one could determine a range of natural variability, if either has a reasonably accurate long term estimated temperature/energy range.

Since both the energy and the ice free surface area varies over long times scales, the most stable FORs still do not eliminate uncertainty.  With a 1 C to 4 C "average" ocean temperature range, there would be an "average" 2.5 C (327.4 Wm-2) temperature/effective energy with a +/- 1.5 C (7.12Wm-2) range for the more recent glacial/interglacial periods.  If the focus is on either interglacial or glacial, the range could be reduced by half to +/-0.75 C (3.62 Wm-2).

So while I am just tickled to death that SteveF is winning the gnat's ass war, the real focus should be the expected range of natural variability on all relevant times scales, not just dreaming up more creative ways of removing a portion of the natural variability on arbitrary times scales, since the chart above doesn't paint the same pictures and these next two charts. 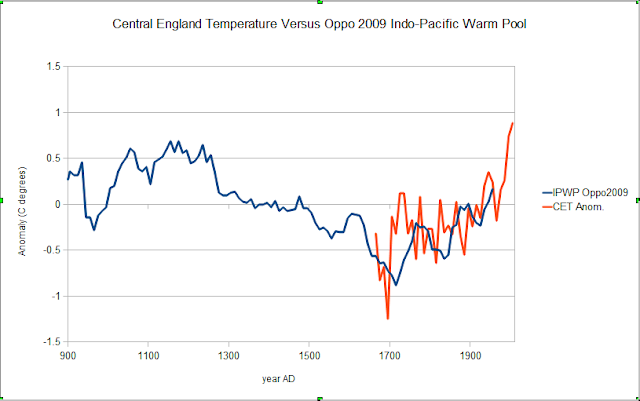 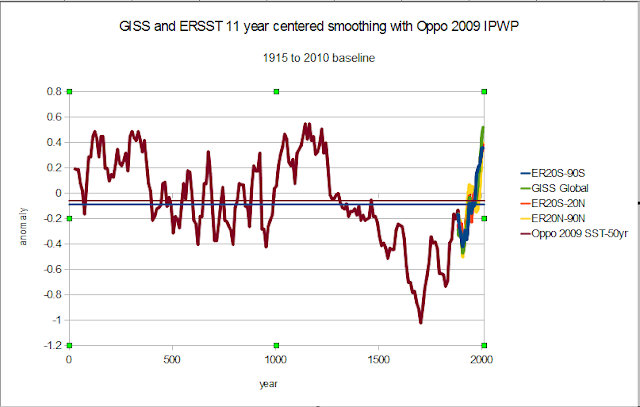 As a final note, while there are plenty of theories, part of the equation is sea ice area and hemispherical distribution.  The solar-lunar connection with climate likely plays a role in this variability since sea ice floats and orbital forcing also effect tides which can free or fix sea ice.  That is a non-radiant "forcing" or "unforced variable" in the currently radiant centric gnat's ass modeling approach.