Back to the Layered Cocktail Analogy 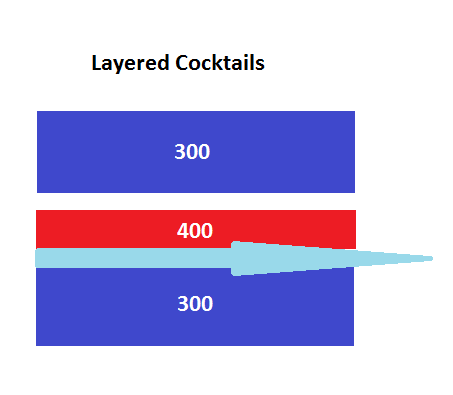 You have three blocks with thermal mass.  The center block has a value of 400 units while the upper a lower blocks are fixed at 300 units.  There is a net heat flux of 100 units up and down.  Just like pouring a fancy layered cocktail, you slide a different density layer in between the lower two blocks.  What happens to the net energy flux?

If the layer slide in is warmer than 300 units but colder than 400 units, there is less net flux down from the 400 block, but about the same net flux into the lower block.  The 400 block can cool more efficiently upwards.  The total energy of the "system" increases by whatever energy is transferred in by the slide layer.  If the slide layer has lower thermal mass, it would quickly "temper" to the average energy of the upper and lower blocks.  If the slide layer has high thermal mass, "tempering" will take longer and if the layer is an actual flow, heat will be transported elsewhere.

This squiggly mess is the UAH lower stratosphere NH data, inverted and normalized with the deep ocean temperatures also normalized.  Believe it or not, there is actual useful information in that mess.  The two arrows show a lag between the deeper ocean and surface mixing layer (0-100 meters) at the 1998 super El Nino event.  The deep ocean data is annual while the NH LS is monthly with 25 month smoothing.  While there is a lot of other noise, the NH LS makes a pretty good proxy for volcanic forcing.  With the NH LS inverted, the relationship between ocean heat capacity is a little more obvious.  The lower stratosphere tends to track the average energy of the deep oceans 0-700 and 0-2000 meters than it does the surface mixing layer which can have a more complex lead/lag relationship with the deep oceans and volcanic forcing.  The lead/lags and short term divergences are mixing "noise" as various layers attempt to regain a steady state.  Since the deeper oceans are not cooled from above, the layered cocktail analogy applies.  Cooler more dense surface waters from the polar regions "slide" into place based on their temperature and density.  Trying to figure out the short term impact is not something I would dedicate my life to, but having a rough idea of the lag times is nice.

When you have a number of references that tend to be related to the delta Q part of the simplistic "Climate Sensitivity" equation, even this squiggly mess is useful.
Posted by Unknown at 9:08 AM