One More Time With Feeling! Climate "Sensitivity" is 0.8 C per doubling

As usual the climate science geeks need "proof" which has to involve some complex math and ludicrous insight for an elegant solution to a non-existent problem.  The chart above has the estimated climate impact of CO2 as measured at Mauna Loa based on an estimate of 0.8 C impact per doubling of CO2 "if" that doubling produces an increase in atmospheric resistance of 3.6 Wm-2 (note: the chart should read 0.8 C per 3.6 Wm-2).

That is all the assumptions; that CO2 does have an impact, that a doubling will produce 3.6 Wm-2 of additional "forcing" or resistance to atmospheric heat loss.  The 0.8 C again is based on the average energy of the black body source of the Earth, i.e. the oceans which are at about 4C degrees which by the Stefan-Boltzmann law would be about 334.5 Wm-2 of equivalent energy.  There is no 33C assumption or average surface temperature assumption, just an initial condition and estimated forcing.

As I have explained before, the estimated surface air energy or Down Welling Longwave Radiant (DWLR) energy is approximately 334.5 Wm-2.  That is not a coincidence, that is physics.  The black body source produces the energy that the atmosphere tries to retain.

Since the actual area of the black body source, the global oceans, is not equal to the full surface area of the Earth, there has to be energy transfer from the source to the radiant "shell" that happens to have a area equal to the full surface area of the Earth.  The ocean area is about 70% of the surface, so the shell energy would be 0.7*334.5= 234.15 Wm-2 approximately, but the area of the ocean liquid surface varies seasonally and over longer periods, adding a bit of uncertainty.  "Surface" albedo, the actual reflectance of the liquid ocean surface, determines the average energy of the oceans not the overall albedo because clouds are a response to ocean energy.  In other words, TSI*(1-a)/4 is for a "shell" surface not a black body cavity "surface".  The black body cavity RMS energy input calculation requires a tad more detail than the telescope jockey "average".  Oops! That would be a major Sagan, Hansen et al. faux pas, doncha know that leads to a butt load of climate "paradoxes".  They should have considered two atmospheric effects, water and dry well mixed greenhouse gases.  Hey, ya live and learn right?

So when I mention this simple manner of looking at a complex problem, there is some resistance. 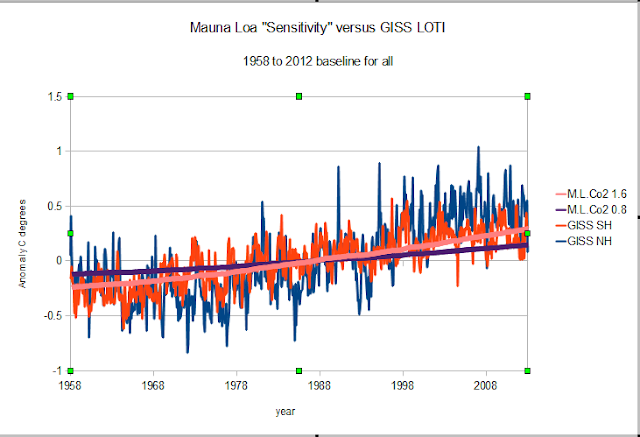 There is not much more that can be explained, but I can break out a comparison of another data set with with a couple of "sensitivity" estimates for the "believers.  Here is GISS LOTI with a 1.6 and 0.8 C sensitivity curve.  The 1.6 is a tighter "fit" for the short Mauna Loa period, but 0.8 is hanging in there.  Considering that 1965 to 1976 were supposedly cooler than "normal", the 0.8 looks to be capturing the longer term trend.  Remember though, the 0.8 is based only on the ocean heat content and the estimated forcing per CO2 equivalent doubling or the "black body cavity" energy and response, ignoring all other unproven feedbacks and elaborate handwaving.

As I have pointed out before, the liquid ocean range is roughly 60S to 60N and not uniformly distributed between hemispheres, which impacts the "average" total solar insolation of the "black body cavity".   The "shell" is uniformly distributed, even though the energy provided to it may not be as uniform, which creates a bit of an apples and oranges situation.  The largest problem being clouds which respond to ocean solar forcing and help regulate the energy balance of the ocean "black body cavity".
Posted by Unknown at 10:22 AM