Final? Update:  I Was asked a question about whether the Carnot efficiency could be used to determine a range of surface temperatures for Earth.  While Carnot has limits, it can provide a lot of information, so I set up this Carnot Divider simple model. 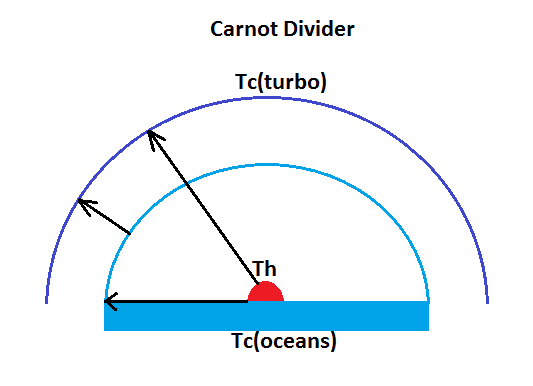 The Carnot Divider is just a simple use of the Carnot efficiency to establish or define a frame of reference common to both the oceans and atmosphere.  Since thermodynamics allows a great deal of flexibility when selecting a frame of reference, this is defining my choice, not a standard frame of reference.  You can determine if it has merit or not, but since many did not understand my use of a moist air boundary envelope, this may help explain why it may be useful.

The rules are pretty simple, given that energy in has to equal energy out of a stable open system, the sum of the work done on the ocean "system" and atmospheric "system" must equal 50% of the energy available.  Work in this case is heating.  System is in quotes because I am defining two separate but coupled systems.

I used a spread sheet to show the basic relationships.  For the left hand Aqua world, Ocean efficiency increases while Turbopause efficiency increases.  The only limit is the 50% work done.  At 303.5 K degrees, [1-Tc(oceans)/Th] + [1-Tc(turbo)] = 0.5 or 50% of the available energy.  Remember that this is based solely on the two sink temperatures selected and the 50% requirement.  The effective energy of a surface at 303.5 K degrees is 481 Wm-2 which would require half of the energy available meaning the energy available is 962 Wm-2 or 70.7% of the solar constant of 1361 Wm-2.  Based on the simple Carnot Divider, the albedo or amount of energy reflected, should be 29.9% or the total energy available and just for fun, 29.9% of the available energy is 407 Wm-2.  The Tc(turbo) is based on a best guess, not a boundary based on sound physics.

Tc(turbo) if you follow my ramblings, is equal to the lowest temperature ever measured at the surface of the Earth.  A radiant reference "shell" should be perfectly isothermal.  Any temperature below -89.2 would not encompass the total surface area of Earth.  Tc(turbo) should be the first near ideal reference "shell" which also happens to be the approximate temperature of the Turbopause, where all turbulent mixing stops in the atmosphere approximately 100 kilometers above sea level.  This reference shell is obscured by the stratosphere temperature inversion, but so far the Carnot Divider appears to agree with my choice of atmospheric sink temperature.

There are a few things that need to be considered with this simple model.  The oceans system is enclosed in the atmospheric or Turbopause system.  The efficiency of the oceans system is 0.1063 or 10.63% of the 481Wm-2 input energy which would be 51.1 Wm-2 converted into thermal energy in the oceans.  That combined with the atmospheric work, 0.3937*481=189.4 equal 240.4 Wm-2 or the common value of the black body temperature of Earth which does not include the Turbopause shell effective energy of 65 Wm-2.

Since the Carnot Divider is based solely on temperatures, the 240.4 apparent black body energy plus the 65 Wm-2 Turbopause shell energy equal 305.4Wm-2 which would be a surface at a temperature at -2.24 C which is slightly lower than the -1.9 C Tc(oceans) value.  That would indicate that some minor tweaking of the sink temperatures is in order to close the energy balance, but for a simple dumb model, I would think it is worth a little more investment in time.

Another thing for some of the Sky Dragon Slayers to consider is that the Turbopause "shell" temperature is dependent on the radiant properties of atmospheric gases, primarily CO2.  This higher, colder "shell" or effective radiant layer is higher and colder than mentioned by the Climate Science Gurus, but is a purely radiant boundary.

Finally for this post, the albedo energy of 407Wm-2 plus the Turbopause shell radiant energy of 65 Wm-2 is equal to 472Wm-2.  With 481 Wm-2 of work done in the systems via thermal energy, some portion of the 481-472=9 Wm-2 difference is likely due to non radiant energy input into the systems.  That would be gravitational, rotational and geothermal energy which combined may be on the same order of magnitude as CO2 forcing is estimated.

If Th increases, the atmosphere would warm more quickly than the oceans because of the different internal system efficiencies, producing an internal imbalance.  Since the ocean sink temperature is greater than the atmospheric sink temperature, where that imbalance exists and what would happen with an imbalance is not obvious.  So let's consider the third wiper on the Carnot Divider Diagram.  With Tc(oceans) = 271.25K and Tc(turbo) = 184K, the ocean sink to atmosphere sink efficiency is 1-184/271.25 = 0.322 or 32.2 % maximum efficiency.  The Carnot efficiency calculation is for a maximum efficiency, not an actual efficiency.  In a balanced system, the maximum heat transfer efficiency is 32.2 percent and with the source in this case being 271.25K degrees (307Wm-2), and the sink being 184K (65Wm-2), the total energy transfer would be 242 Wm-2 of which 32.2 percent would be 77Wm-2.  The actual sink temperature is 184K (65Wm-2) which if the transfer were ideal would be 77Wm-2 or 192.5K degrees. There is possibly 12 Wm-2 less energy transferred than could be transferred.

The Carnot Divider does not provide much information on the various internal states the system may take or the settling time between states, but is does indicate that there is a fairly narrow stable range dependent on maximum temperatures, not averages, and that specific heat capacity is a major consideration in the range of thermal efficiencies.


It looks like I got the size wrong, but this compares the Aqua World in salt and fresh versions.  If the Turbopause sink is fixed, then there would be a different control range for a salt and fresh ocean world.  The ideal maximum SST for Salt Aqua World would be 303.4 K degrees (note I added one significant digit) and the Fresh Aqua World would have an ideal maximum SST of 304.7 K degrees.  A 1.9 K degree change in the ocean sink would produce a 1.3K change in the maximum SST.   Fresh water flooding is often mentioned as a cause of THC stalling, but according to the simple Carnot Divider, the change in the freezing point would have a similar impact without all the complex modeling requirements.


I hope some of you could follow how effective even the simplest of models can be.  When a Carnot efficiency model can get this close it says something about the simplicity of the Earth Climate System once you eliminate the noise.

Note: I may come back to proof this later since this is a work in progress, so watch out for typos and mistakes.

I am finished with this one.  Now that I have double checked the "Real World" side of the first spread sheet I think there can be some improvements, but those will require actual area and shape considerations, for a simple model though, it is pretty amazing.