Deep Ocean Temperature versus the Surface 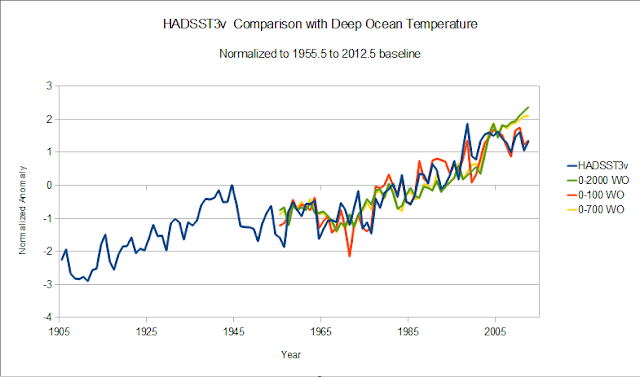 Because of the travesty of the missing heat the miraculous layer jumping 10 raised to the 22nd Joules of energy times some number depending on you choice of baseline is again the topic of climate geek conversation.  Using the standard normalizing data torture, this chart compares the Hadley Center SST3v data with the "global" deep ocean temperature.  No muss, no fuss, no scaling required, just divide by the standard deviation for a common period, in this case, 1955.5 to 2012.5 'cause that's how the deep ocean temperature was formated.  Nit pickers will say that the OHC data sucks.  Well, it doesn't suck much worse than any of the other data.  The absolute values they stick to the anomalies may suck, but the anomaly data does capture the general trends.  There is a little lead lag situation which I would think one should expect with an inconsistent relationship depending on who is leading, but the data should be quite "usable".

There does not appear to be any wild revelations of causations, just the typical complex mixing of the oceans that no one can come close to properly modeling.  The temperature trend difference between the 0-700 meter and 0-2000 meter data is barely noticeable to the point of likely not be significant, so harping on the small deviation at the end following a shift in instrumentation is a bit silly, but whatever floats your boat.
Posted by Unknown at 5:57 PM