I love how climate change discussion progress.  Over at Lucia's SteveF posted basically a rebuttal to the Foster and Ramsdorf much less than ideal removal of Solar, Volcanic and ENSO forcings to produce a theoretical CO2/Anthropogenic warming trend in the instrumental data.  SteveF's methods, also less than ideal but an improvement, indicates that there is a lower warming trend due to CO2/Anthropogenic forcings than the F&R method.  In the course of discussion, SteveF mentions that ENSO has no significant effect on "Global" temperature.

Greg Goodman enters promoting a dT/dt derivative approach which he thinks is the cat's ass of time series analysis methods which inspires Webster to throw in is fat tail opinion on the simplistic elegance of diffusion models and how CO2 follows the Indo-Pacific Warm Pool temperatures to near perfection.

The elephant in the room is natural variability i.e. ocean pseudo oscillations, pseudo since couple oscillators respond differently to different perturbations and have differing dampening coefficients more often than not, with a range of potential time scales or Tau.  One can dig out "A" Tau, but in a chaotic coupled system, which is slightly redundant, never know for sure if that is "the" Tau relevant to the overall response.  In other words, the system is complex as all get out.

When Webster says that the IPWP and CO2 are joined at the hip, he is acknowledging that ENSO has a major impact on "Global" surface temperature and vice versa.  The based on his rather short time frame "Tau" decides that there is about 4 or so ppmv CO2 change per "Global" degree C change.  That is Ambrosia, the queen of fruit salads. 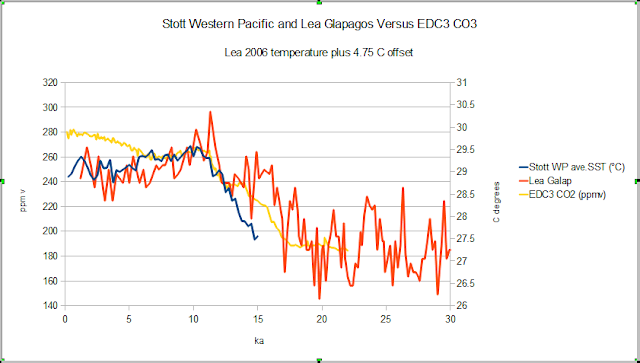 The Western Pacific is pretty close to Webster's Indo-Pacific Warm Pool and the hot end of the ENSO pseudo oscillation.  The Galapagos is near the original ENSO region which keeps moving to the west because we live on a planet that rotates once a day.  The CO2 is the first 22 thousand years of the Antarctic composite.  Until about 5 to 7 thousand years ago, CO2 and the ENSO regions where playing nicely just like Webster thinks.  But the oceans are never in "equilibrium".  There are 4300, 5000 and 5800 year orbital "cycles", sub-harmonics of the ~21ka precessional and ~41 ka obliquity orbital "cycles" with dampening rates that produce 1700, 1200, 1000, 400 etc. recurrent decay patterns in the paleo data.  The "average" lag of deep ocean temperature to surface temperature is around 1700 years, so every two to three "lag" periods can have a recurrent synchronized pulse that seems to come out of no where.  Which with the ocean distribution being asymmetrical, there is a bit of a hemispherical "seesaw" that likely never ends, just varies in amplitude like most couple oscillators are prone to do.  You can spend you whole life trying to figure those out or if you are lazy like me, note that +/-1 to +/- 2 C is a normal variance and don't worry about it, Tom Sawyer the hard stuff on some body else.

Now the interesting part of the discussion is that people are starting to notice that the "parsimonious" reasoning needs a bit of tweaking.  40 ppmv per degree C over longer time frames is an order of magnitude greater than the Webster's estimate.  This could get interesting.
Posted by Unknown at 7:19 AM