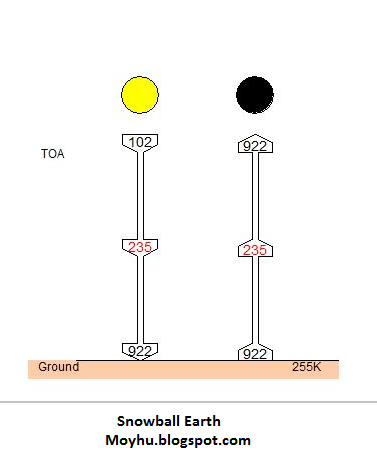 Nick's Entropy Balance starts with the snowball Earth aka Weak Young Sun Paradox.  Earth has a weak sun or no GHG atmosphere with 30% albedo.  In his figure one above the "Ground" equilibrium is 922 Wm-2 in Nick's heat/entropy flux convention.  The red arrow represents heat flux, the head of the arrow is entropy transferred to the heat sink and the tail of the arrow entropy associated with the source of the flux.  For the incoming arrow, 102 Wm-2 is reflected and 235 Wm-2 thermalized corresponding to the common assumption of 30 percent albedo and 70% absorption producing "real" heat energy, the 235 and real energy reflected, the 102.  The 922 Wm-2 is unrealized energy basically.  With the Ground perspective or frame of reference the 922 Wm-2 entropy transferred to the heat sink is not utilized or thermalized, within the boundaries of the model.

This is a large amount of energy partially because the thermalized energy is part of a spherical shape reduced to a simple up/down "average" and partially because of the radiant balance "convention".  If all of that entropy were themalized in this perspective, then thermal energy up would be 922/2 or 461 Wm-2 with a counter balancing 461 Wm-2 down, producing a radiant "shell".  Then if the energy were adjusted for the spherical shape, 461/4=115.6Wm-2.  This represents a small error in Nick's model, in my opinion, as the entropy should balance the "shell", in this case Ground thermalized energy for whatever common shape the shell takes.

The reason is that the entropy can be thermalized and then released again as entropy from a secondary process, internal energy transfer for example, which can be any combination of mechanical, chemical or electromagnetic energy flux progressing over any time frame. 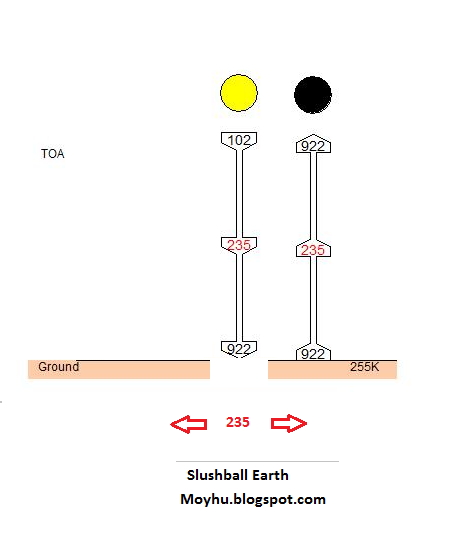 By adding the sub-surface to the diagram, you have the basic Slushball Earth which because of the thermal properties of the subsurface, mainly salt water, the minimum energy range for liquid water is dependent on the salinity of the fluid.  Assuming that the minimum temperature of a liquid sub-surface is 4C and the area of that sub surface is 70% of the total area of the sphere, the value of the sub-surface adjusted for area and shape would be 234.2 Wm-2.  The "Ground" in the slushball Earth case has a gap creating the equivalent of a Black body Cavity.  In the real world, the Ground surface would never be exactly 255K, but would have a range that changes with the seasons, centuries and millennia and a subsurface that would have an equal value that is rock solid stable by comparison, having had eons to approach a more realistic equilibrium.

Again, Nick's post is here for reference.
Posted by Unknown at 7:47 AM