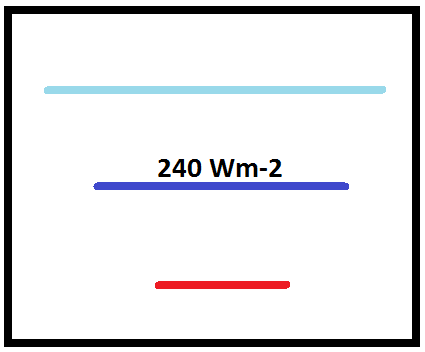 Most of physics is based on simple models.  Some of the models are so useful, the become "laws" of physic in some discipline.  F=ma, Force is equal mass time acceleration, is Newton's second law of motion.  The first is an object at rest will remain at rest unless acted upon by an external force and an object in motion will remain in motion until acted upon by an external force.  The third law is one body exerts force on another body, the other body will exert an equal and opposite force.  I added the word "external" for the non-equilibrium thermodynamics fans.

Once someone's model make the law leap, everyone wants to play with the new law.  In the drawing are three simple lines, the blue line has 240 Wm-2 for a label.  If you are playing with the new field of radiant physics, you might want your models to be based in some way on a law of physics, thank you Issac.

If the blue line is stationary, i.e. at rest, the upward force would have to equal the downward force. 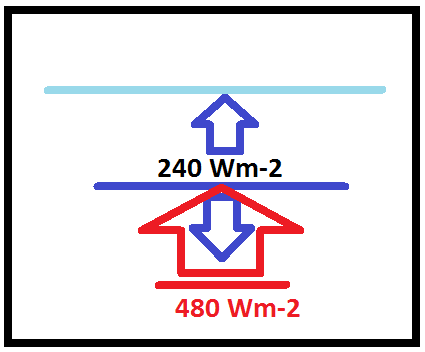 Now we have equal and opposite forces on the blue line, the red line provides 480 Wm-2, 240 is returned downward and 240 set upward.  This is the simplest of simple radiant up/down models.  Now there is a light blue line that doesn't have a value and the lengths of each line are not the same.  For the moment, pretend the lines are equal lengths and the light blue line is 120 Wm-2 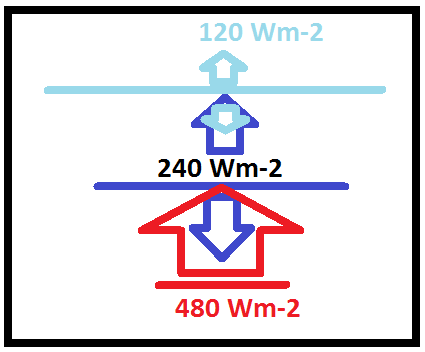 Now what do you do?  For those of you that don't follow my ramblings regularly, I have had fun poking cryptic jabs at some of the more elite figures in climate science, why?  Because they screwed up at go.  The very first assumption made was wrong.  The 240 Wm-2 "shell" does not exist.  It is an "average".  "Averages" should be compared to averages in order to get ballpark estimates, but never to be used as a precision "measurement".  "Averages" are useful as long as you continue making measurements to discover the precision of the "average".  In simpler terms, an average is no better than its standard deviation.  Just by adding a new reference "shell" following the same simple 1/2 progression, I have added up to 120 Wm-2 of uncertainty to the 240 Wm-2 shell.

Since some think the "surface" temperature is a good reference, let's see how that works out with the same simple progression.  Starting a 400Wm-2 you have 400, 200, 100, 50 etc. as stable "Shells" which using the "laws" of motion you can use as fixed, measurable, references.  With fixed stable references you can use simple models to predict the impacts of any change in "external" force acting upon another "body" or in this case "shell".

A climate blog junkie ask me a question the other day about CO2 "forcings" dependence on source temperature/energy.  CO2 is not an energy source, it has to be dependent on some source of energy.  Therefore all CO2 "forcing" is actually a feedback.  Think about it.  Have you even heard of a "forcing" resistor?  That is all CO2 is in a radiant physics problem, a changing resistor which can change the amplification of the input energy or true forcing through the system.

When Dr. Roy Spencer noticed that clouds appeared to be acting as a "forcing" on atmospheric temperatures, he was absolutely correct.  Clouds respond to the true forcings, solar energy in and solar energy stored in the oceans, which can change the energy flux through the atmospheric resistor.  Changing CO2 concentration just adjusts the value of the resistor.

Now let's look at the length of the lines.  If the Earth were a perfect sphere with uniformly distributed energy which would make the "Average" a more precise estimate, then the difference in the area of the radiant shells which increase slightly with altitude would be "nearly" negligible.  Using 6371 kilometers as the average radius of the Earth at sea level, the area at 100 kilometers above sea would be 3% greater, which is "nearly" negliblible.  It would only cause about 12 Wm-2 or error if not corrected for.  Since CO2 "forcing" is estimated at 3.6 Wm-2 per doubling, that is about 3 times the estimated impact.  On a planetary scale that is not bad, but add that to the uncertainty of the "average" value of a fictious "shell" and things start getting wonky.

I picked 100 kilometers because that is the approximate altitude of the very first stable radiant "shell" in our Earth radiant model.  The average temperature of that shell is ~ -89C degrees and fairly stable with a range on the order of +/- a degree or so.  It is stable because it does not have turbulent mixing therefore it has the name of the Turbopause.  The area of that Turbopause radiant "shell" is about 526.2 million kilometers squared.  That is how long you can say the light blue line is for this example.

Guess what sports fans, the ocean area between latitudes 55S and 55N is 73.4 percent of the total surface area.  Seasonal sea ice variations extend to roughly 55 degree latitudes.  That sea ice extent in winter varies on several time scale producing quite a bit of "noise" in that "average" 236 Wm-2 fictitious reference shell.

A black body is an idealized physical body that absorbs all incident electromagnetic radiation, regardless of frequency or angle of incidence.
A black body in thermal equilibrium (that is, at a constant temperature) emits electromagnetic radiation called black-body radiation. The radiation is emitted according to Planck's law, meaning that it has a spectrum that is determined by the temperature alone (see figure at right), not by the body's shape or composition.

Notice, "idealized", which is not a bad thing, but idealized means pay close attention to the less than ideal.

A radiant shell is not as well defined.  The original radiant measurements used a slot or disc in the simple up/down model used to determine the spectrum of the temperature alone dependent idealized black body cavity.  For a spherical shaped surface, the radiant shell is the integral of an infinite number of radiant "discs" all emitting/absorbing the same energy meaning they are at the same temperature.  In order to specific the huge number of spectral lines for  electromagnetic energy emitted from the idealized black body cavity, the radiant shell absolutely must be an isothermal layer or meticulously adjusted for variations in temperature, area and shape.     The reason is that the shell cannot reabsorb its own emitted energy.  When I added the light blue line in the drawing above, guess what happens?  The fictitious 240 Wm-2 line may be absorbing its own energy.  This is what is called a gray body, not a black body and not a shell, but a gray body which would need to have its own "idealized" definition to be useful.  Since the gray body is sandwiched in between an idealized black body and an idealized radiant shell, all three would have to agree if modeled correctly, or you could just avoid the gray body and use the black body cavity and radiant shell with proper accounting for the less than ideal realities.

This is why I have a habit of saying radiant physics is more accounting than physics.  If I gave you only your average monthly deposits and withdrawals with no balance or bottom line, you would not retain my services as an accountant would you?

Now I am going to leave you with a simple but useful reference on the Laws of Radiation so you can see how well the laws of motion relate to their equilibrium requirements.  That is the actual basis of the simple static modeling approach that works so amazingly well.