There is a lot of debate about what causes what in climate change.  With the current "pause" or reduced rate of warming Ocean Heat Content is being tossed around as proof of some point or another.  As support of points, different pictures are presented by different sides or the accuracy of the data is questioned. As I have mentioned in other posts, the deep ocean data is about average for climate science.  Accurate enough for a tease, but no where near accurate enough for drawing conclusions.

This is a chart of the ocean heat capacity by depth range with total being 0-2000 meters.  This was part of the Distinctive climate signals in reanalysis of global ocean heat content, Magdalena Balmaseda, Kevin Trenberth, Erland Kallen 2013 paper published in Geophysical Research Letters    As you can see volcanoes are highlighted with a tiny 1998 El Nino blip.  The OHC drops then spikes with a curve to a new higher level. 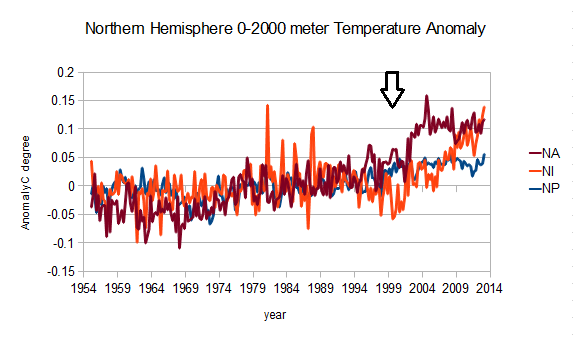 This chart using the NOAA Vertical Averaged Temperature Anomaly data shows the timing of the events in the Northern Hemisphere ocean basins.  Following the 1998 El Nino, the North Atlantic and Northern Indian oceans shifted to a new level.  The North Atlantic is the first to arrive and levels out after gaining 0.05 C degrees. 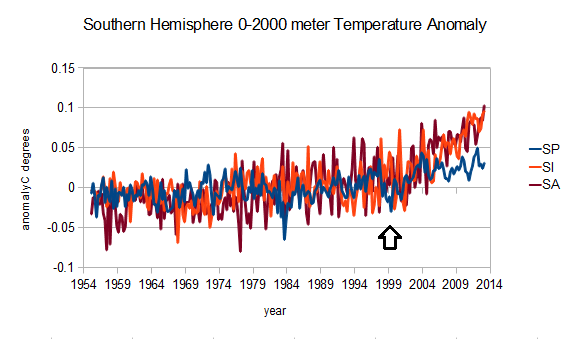 In the Southern Hemisphere, the Atlantic and Indian oceans started a more modest slope which the Southern Pacific making a more subdued curve towards a new level, but continuing the slope from 1984.  You can interpret these individual basin responses a variety of ways.  Since ENSO was highlighted on the first chart in a demeaning manner and ENSO happens to be a multivariate detrended index based on the Pacific tropical Equatorial oceans, perhaps looking at the Pacific Ocean would be good place to start.

The ENSO Multivariate Index is based on a small sea surface temperature area 5S to 5N in the Pacific Ocean which has changed over the years.  The regions have changed because the ENSO pattern shifts.  Currently, the warmer "ENSO" region water is north of the ENSO regions near 10 to 15 North latitudes.  This leads to some confusion about the ENSO effect on climate.

The 0-15N latitude SSTs look like ENSO but without the cooling following the 1998 El Nino.  Note that the 25N to 45N region SST shows a plateau and the 50N to 90N SST shows a curve similar to the 0-15N SST.  Deep Ocean temperatures follow surface temperatures rather well, they just don't follow poorly conceived "indexes".  If the ENSO index was not detrended and its area expanded, it would make a better index, but it is not.

The funny part is all the effort made to remove volcanic, solar and ENSO signals from the temperature records to "prove" that the increasing ocean heat capacity has to be due to something else.
Posted by Unknown at 3:09 PM