The inspiration for this trash blog, as in a place to toss around ideas of my own that wouldn't vanish with a hard disk crash, was Commander Kevin's Earth Energy Budget.  Commander Kevin's budget did not balance and I caught quite a bit of grief from Commander Kevin's Space Cadets that seem to believe their fearless leader is infallible or some such nonsense.  Before Greame Stephens and other basically forced the Commander to admit his errors in the form of a "minor adjustment" in his latest version, others and myself have moved beyond the fatally flawed K&T/T&K/FTK etc. cartoons.

The loyal minions of the Commander though like dwelling in the past and have rejoiced that the Commander with another letter have reanalyzed the Ocean Heat Content data i.e. have beat the data to near submission, to show that the travesty has been averted, the prodigal heat returned.

I have used static models and Carnot efficiency estimates on a number of occasions to determine how much "slop" there is in the system.  That "slop" is the irreducible imprecision or the "you can't get there from here" uncertainty limits.  There is more "slop" aka natural variability, instrumentation error and the like, than there is CO2 forcing impact.

Using Carnot efficiency and three points, yes three since there are liquid and gas "greenhouses", you can get a fair ballpark of what should be going on.

The Carnot efficiency as I have explained before is the "Maximum" efficiency possible with a hot reservoir and a cold reservoir.  Using absolute temperature, Ceff =1-Tc/Th, pretty simple fundamental Thermo 101 stuff. 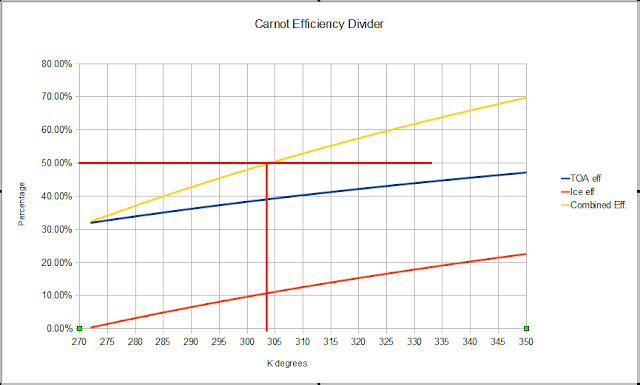 Using the two cold or Tc references for the liquid and gas parts of the problem with the ocean surface as a third reference, this chart slides SST maximum producing the range of efficiencies.  The red line at 50% represents the requirement for Ein=Eout.  Since each of the efficiencies represent work potential, when the total work done is equal to the waste energy, we would have a stable open system.  That stable maximum SST would be ~303K or about 30 C degrees, just like it is in nature.

For "normal" operation, the work done on the oceans would be 10% or less because the system is limited by the Ein=Eout requirements.  Normal is in quotes because poo-poo occurs.  Recovering from some event, the "average" energy of the oceans could be reduced meaning the system is not in a steady state but a start up mode where less energy could be converted to work in EITHER system, liquid or gas.  The systems are coupled by the common source or Th, so there can be damped oscillations as the systems approach individual and coupled steady states.

I hope that is not too confusing, but if Commander Kevin had realistic understanding of even the simplest of coupled open systems, his minions might not be so befuddled.
Posted by Unknown at 11:04 AM