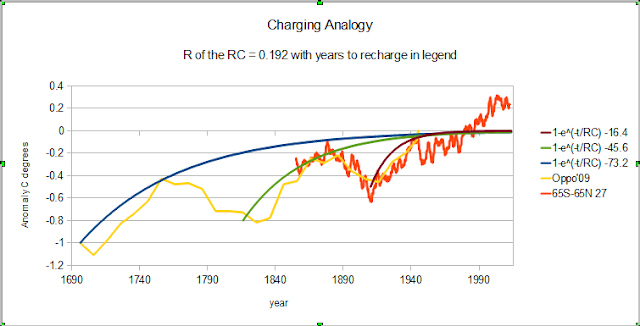 I use a charging analogy because it is simple for most to understand and it is related to R resistance to charge and C the capacity to be charged or recharged.  The neat thing about a planet is that R should be closed to fixed and since CO2 equivalent forcing is to be added, R is what should change.  If you know R, then you can start teasing other information out.

In the legend you have the equation which is the same for each curve and a rough value for C, the capacity being recharged combined with the years required.  So instead of a real C, you have an effective C.  The R-value selected is 0.0192 which is an extremely rough guestimate based on what I considered best fit.  I selected the ice free portion of the oceans to reduce some of the noise and the Oppo Indo-Pacific Warm Pool reconstruction starting in 1700 to extend the instrumental back in time.

I did not try to make an exact fit.  There is a lag that is questionable in the Oppo data due to the natural smoothing of their deep ocean core samples plus their binning method.  I don't expect the IPWP to be perfect so I led the fit a little just so the curves would be easy to see.  The starting values are nearest tenths of a degree which given the data may be at best +/- 0.25 C degrees is another "ballpark" estimate.

What is interesting with just this rough estimate are the C values of 15.4, 45.6 and 73.2 years respectively.  Pseudo-oscillation periods could easily be related to the charging rate explaining some of the more "pseudo" aspects of these "oscillations" that really aren't.  It may be nothing, but the values are interesting.

There is a smoothing note on the ERSSTv3 65S-65N data in the legend.  That is for the 27 month stacked smoothing I find works well, leaving some of the more interesting short term "oscillations" and/or noise.  The data can be downloaded at KNMI Climate Explorer and the Oppo et. al. 2009 Indo-Pacific Warm Pool data at the NOAA NCDC Paleo website.


The charger analogy is a ridiculously simple model which I think might be very helpful with this ridiculously complex problem.  The model with these rough estimates leaves about 0.2C degrees of the SST warming for the area selected for "other" than natural response to perturbations.  Since the 65S-65N SST doesn't include the land or polar amplification which can be due to both natural and "other" causes, don't get too crazy reading more into the rough estimate than is there.