Little Things that Bug Me

On the whole I try to stay out of the temperature series debates because on the whole that are pretty darn impressive.  Having an error in the ballpark of +/-0.25 C for a whole planet is a remarkable accomplishment.  The are still blemishes, but they require squinting which now has become completely over done with the Pause debate and the new Cowtan and Way kriging into the stratosphere method.

While all this is going on the most obvious blemish is completely swept under the rug, the Southern Hemisphere divergence.

The data for the Antarctic didn't really start until the late 1950s.  The coldest place on the planet has the least data for a good reason, it is the coldest place on the planet.  Even though the Antarctic is only around 4% of the entire globe including sea ice extent, it has been a battle ground for sneaking in a tiny bit of "global" warming for good measure.  Sometimes tweaking can get a bit out of hand. 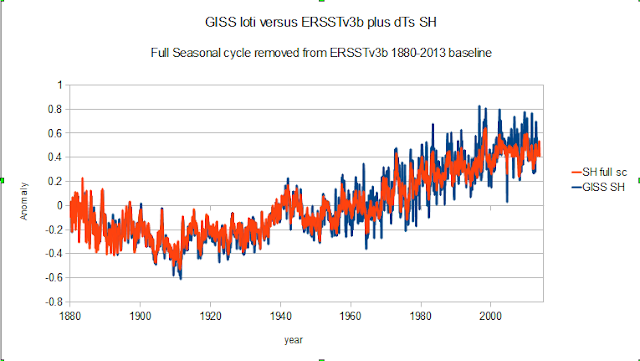 Since I have mentioned how baseline selection can really change the look of the data and changing the baseline can help isolate common breakpoints, I though I would show what baseline selection could do with the "global" surface temperature data starting with the southern hemisphere.  GISS land and ocean is a combination of the GISS land surface series, dTs and the ERSSTv3b now with no satellite inspired cooling bias.  KNMI Climate Explorer has the entire ERSSTv3b data available to 1854, though it is rarely seen starting before 1880.  So I masked the southern hemisphere and removed the seasonal averages from 1854 to 2012 to create a full series baseline.  GISS dTs is already in anomaly so I just rebaselined  both to 1880-2012 then using the land ocean area percentages created a quick and dirty southern hemisphere time series.  I have checked a few times, but there still could be a spreadsheet error I may have missed.  As you can see there is a large difference in the variance starting in the late 1950s which the longer baseline period and seasonal cycle appear to remove.  I can't vouch for the data from KNMI, but it appears to be in order. 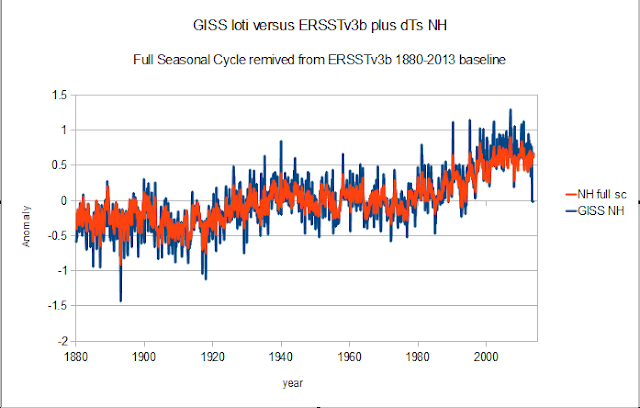 Since I did the SH I might as well do the NH.  Same situation with a more uniform reduction in the variance using the full series baseline and seasonal cycle.  Picking a shorter baseline typically produces a "dimple" at the baseline period which is barely noticeable if you look hard.  The difference in terms of error is really not very much, ~0.12 which is the advertised uncertainty.  The largest difference though doe happen to be right in the "pause" region most likely due to Arctic Winter Warming getting more weight than usual.  Since the simple combination I made treats sea ice as ocean not land, it would have a noticeable impact if one was inclined to threat ocean as land.  I am more concerned with actual  heat in the system instead of every wiggle in some location -30+ degrees below zero, so this is more the type of "average" surface temperature anomaly I would expect.

As I said, the difference is not much to write home about, but since everybody and their brother trying to boost trends in their favor, I just had to toss this out as one of those flat forehead moments.  The data has an uncertainty range for a reason gang.