In the first part of this series I actually broke down and dug out the data I needed instead of waiting on Climate Science to catch up.  Using the KNMI Climate Explorer website (h/t to Bob Tisdale) you can mask regions of most of the popular databases without too much heart burn.  Based on the results of the first trial I revised my ocean basin masking a touch.  The new masking includes the regions from 65N to 65S with the standard Atlantic/Indian break at 20E and Indian/Pacific at 147E.  For the Northern Hemisphere the Atlantic/Pacific break I used is 80W and the Southern Hemisphere 70W.  The NH break could be  tightened up a touch but appears to be good enough for government work.  The Climate Explorer website is user friendly should anyone want to fine tune things. 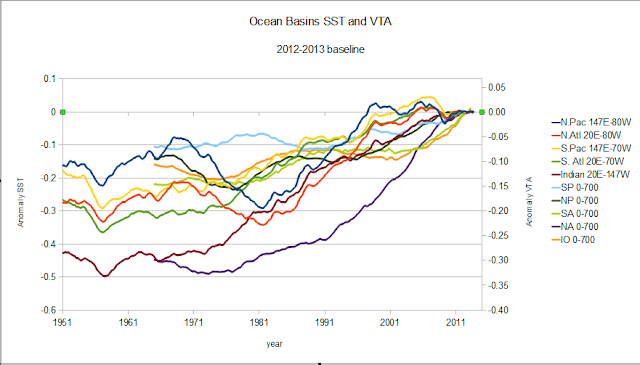 The most radical thing I am doing is adopting a new baseline.  Since 2000 to present has the most state of the art data acquisition plus fewer perturbations, volcanoes, wars, etc. etc. that can impact climate and climate data acquisition this shorter than ideal baseline period should make up for a number of issues.  With this baseline I am removing the seasonal signal for the 13 full years and using the last year as zero.  Since I am more concerned with longer term impacts and not all the short term noise, for the graph above I used an 11 year trailing average for both the SST and the 0-700 meter vertical temperature anomaly.

While this might look a bit like a mess, it appears to be a pretty good representation of the mess.  With a little imagination you can "see" the data doing pretty much what the climate models do, diverge in a somewhat random walk the further you get away for the baseline and zero.  Unlike the climate models there are common responses to perturbations, volcanoes, ENSO etc. with differing regional response times.  These internal variation in response time is the biggest fault of the climate models.  The models are too complex and sensitive so the modelers have to slow the responses down so much they can't get enough realistic detail.  That is a bit ironic since the "purpose" of the models is to replicate the "system" response to perturbations on century and longer time scales.

The biggest WOW in that chart should be the Indian ocean.  The tiny little Indian Ocean is the Climate big Kahuna sea surface temperature wise with a 85% correlation to GISS global land and oceans.  You could through out the majority of paleo and stick to the Indian Ocean and you would be able to amaze your Paleo friends. 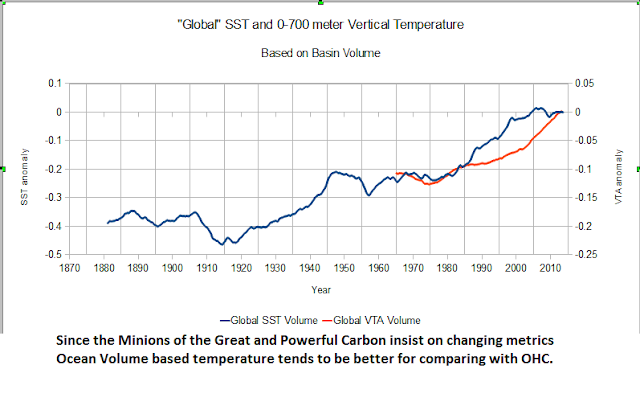 Then if you blow off all of the diligent work by the Minions of the Great and Powerful Carbon you can combine the ocean basins using their percent volume instead of surface area and you have a better metric for "global" warming.  Combining both the basin SST and the NODC vertical temperature anomaly using the percentage volume, you get his correlation which is exactly what you should expect.  There is a different response curve for the surface than there is for the high heat capacity 0-700 meter volumes.  The two tend to regroup within a decade or so for larger perturbations that have asymmetrical impact.  For "Global" perturbations energy doesn't have top flow around the globe to replace one region's loss or gain, the system uniformly and efficiently deals with "Global" perturbations. 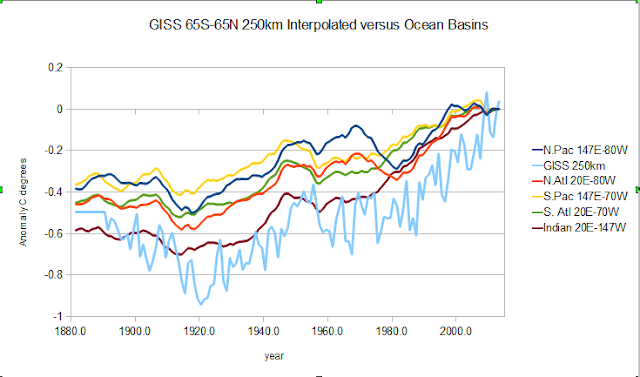 From this comparison you can easily see how well the Indian Ocean Basin SST correlates with the normal Global surface temperature.  Normal meaning 65N-60S with only the 250 meter interpolation so the anti-phase polar responses don't complete screw up the correlations.  You can also see there is little difference in the responses of the northern Pacific and Atlantic even though there is some desire by many to promote the Pacific Decadal Oscillation to some sort of magical "Climate" index.  The PDO has a huge impact on salmon fishing and US/Canadian longer term weather patterns but doesn't really "drive" global Climate.

ENSO on the other hand should be an excellent Climate and Weather index as long as it is not detrended.  The northern and eastern Indian ocean is the hot side of ENSO which would be the better multi-decadal/century scale index while the eastern and central tropical Pacific the up to multi-decadal index.

For century scale considerations, the Indian Ocean temperature response should provide more information on the actual magnitude of volcanic and solar influence on Climate.  Looking at the response of the huge thermal mass Pacific ocean which has the worst correlation to surface air temperature tends to cause a great deal of confusion.  It responds so quickly in recovering that the longer slower THC recharging of the North Atlantic gets completely overlooked.

The next step will be "calibrating" hemispheric volcanic forcing to the ocean basins using the volume instead of surface to make quick and dirty energy balance estimates.