It is Still the Sun Stupid.

Just a quick post on the silliness about the Sun not having ANY (less than a tenth of a degree) impact on climate.  That is just an indication of how ridiculous people ca be once obsessed with pet theories. 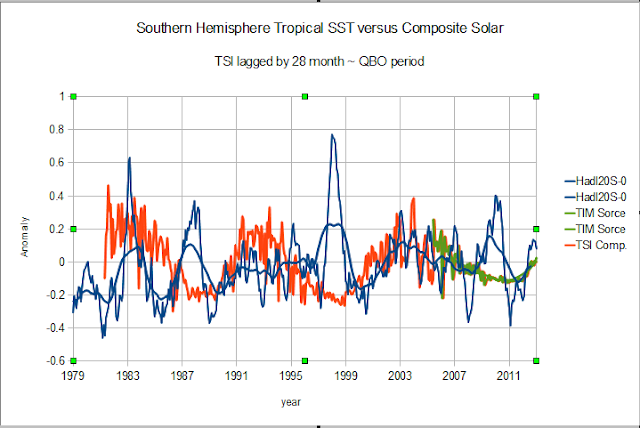 I have shown this simple comparison a few times.  It is just tropical "SST" and the satellite era solar TSI composite from SORCE.  Most rational folks would look at that and say HUH?, looks like solar might just have some impact on climate, DUH. 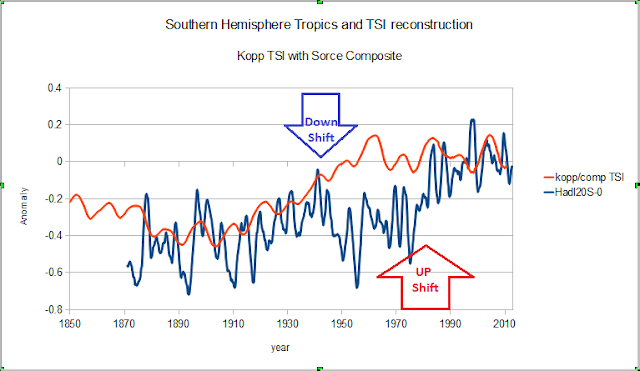 Then when you compare the TSI reconstructions with the tropical "SST" you might say, HUH, except for that crazy shift around 1940, looks like solar might have some impact on climate DUH!

Well, the "SST" data isn't SST data.  It is a mixture of measurements of the ocean bulk mixing layer from just under the surface to as much a 10 meters below the surface.  "SST" would not imediately indicate changes in temperature due to seasonal and longer solar variations since the SST north and south of the equator is isolated by Coriolis effects.  It looks to take about 27 to 30 months for the equator temperatures to equalize which just happens to be about the same frequency as the Quasi-Biennial Oscillation (QBO).

So what about that weird down in 1940 and up around 1980?  Do ya think that it might take longer for other areas to equalize thermal imbalances? 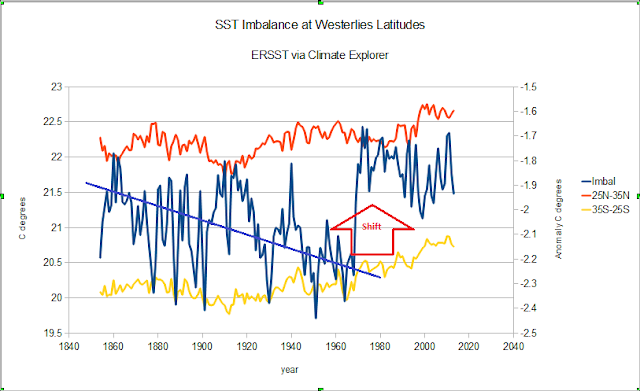 Most certainly it does.  The 30 north and south latitude bands are the "ideal" location for the Hadley and Ferrel cell convergence.  The Hadley, Ferrel and Polar cells drive most of the poleward heat transfer and exist because of Coriolis Effects and temperature gradients.  Hemispheric thermal imbalances cannot exist forever so the cell dynamics shift gears from time to time to restore some reasonable level of hemispheric thermal "equilibrium".  All of this is driven by energy from the sun and rotational energy of the Earth spinning quietly in space.

If you want to blame any other changes on CO2, land use or unicorn farts, you need to figure out the basic stuff first.  Have fun.
Posted by Unknown at 6:25 AM