The Tropics and Solar 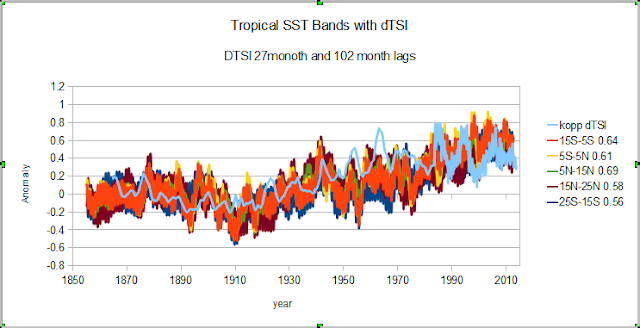 One of the problems with conventional "Forcing" logic is that all "forcings" are not created equal.  Unless you actually hunt for the correlations, you are liable to miss something significant and end up wandering behind the little animals.  Solar forcing in the tropics can have different impacts in just a few degrees latitude.  Clouds would respond more quickly in one band, the ITCZ and may not respond at all in another.  Then since there are seasonal variations and shifts in climate patterns like the Madden-Julian Oscillation and ENSO, you end up with plenty of noise to make things really interesting.  Expecting a perfect correlation would be a bit foolish.

Above are the Tropical SST bands in degree increments using a 1854-1883 baseline with no seasonal cycle removed.  I smoothed each with stacked 27 month averaging to remove most of the seasonal noise but left enough to show how the seasonal impact increase as you move away from the "Thermal" Equator.  The Thermal Equator is about 5N to 15N which shifts the "ideal" ITCZ latitudes a little northward.  Since the ITCZ can shift, mixing at the equator is not consistent so lagged responses to solar or any other forcing would not be consistent.  There is currently a fairly consistent 27 month lag between solar forcing variation and SST response in the tropics plus there is a fairly consistent 8.5 year (102 month) lag in the upper ocean mixing layer.  When you consider both lags you get the correlations between solar and the tropical SST bands.  The highest correlation is 69% in the 5N-15N Thermal Equator zone.

A 69% correlation is not all that exciting.  All It means is that I can be around 69% confident that my smoothing is in the right ballpark of the possible lags that would influence SST when forced by solar variations.  That is better than a coin toss, but not all that exciting for the average stats guy.  Given the complexity of the system, it would stimulate some interest in an engineering kind of guy.

If I just smooth the daylights out of solar using only the 27 month lag the correlation is under 60% so the additional 102 months lag combined with the 27 month lag is moving in the right direction at least.

The dTSI I am using it the G. Kopp reconstruction up to the satellite era with the SORCE TSI composite filling in the end of the reconstruction.  Since there is quite a bit a variability some smoothing should be used, but it is easy to go overboard.

The 27 month smoothing I used is based on the obvious at least to me 27 month lag in the ENSO and tropics from other trial fits.

While the long term correlation is interesting, using a running 50 year correlation produces "Climate Art" more than anything concrete :) 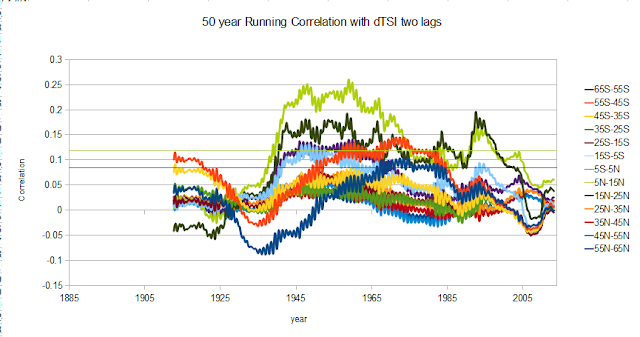 This is correlation to the a less smoothed absolute temperature of the bands not anomaly which results in the larger seasonal fluctuations.  Not to worry. 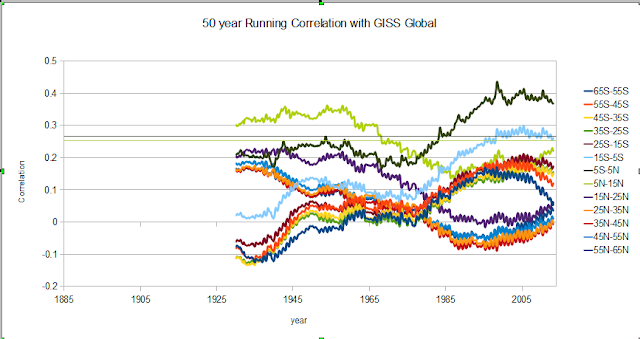 The correlation between the SST bands and GISTEMP is not a lot better until the more modern data :)

Most of the issues would be due to volcanic and all the other climate influences which will require a little more sophistication than approximating lags in a complex system.


The full GISSTEMP period correlation is somewhat better with the equator and SH tropics having respectable correlations to global temperature.  The inverse correlation in the NH is also interesting :)
Posted by Unknown at 11:41 AM