SST versus OHC - Part I the Setting Things Up

The correlation between SST and the 0-700 meter vertical temperature anomaly is pretty good in most cases.  There is a fairly larger error especially near the beginning of the record, but allowing for that matching the 0-700 meter temperature trends to SST trend should provide a fair reference for increases in basin temperatures which can be used to approximate OHC changes for the entire SST record.

Using the KNMI Climate Explorer I have rough ocean basin temperatures.  My "Pacific" includes the most of the Caribbean and the Gulf of Mexico which I may some day revise unless someone else does before I get the chance.  If not I can rescale the basin which I may have to do anyway.  This is more just a first stab than a final result so be patient.

For area, volume and percentages I have the following adapted table:


+ Boundaries between oceans vary depending upon agency, making comparisons with other published estimates difficult.
¤ Total surface area of Earth is 510,082,000 sq. km. The oceans cover ~70.9%.
* Southern Ocean area and volume calculated from ETOPO1 Bedrock version (includes Weddell and Ross seas without ice cover).
# Deepest ocean depth is in the Marianas Trench, measured at 10,911 meters. Maximum depths from ETOPO1 are not expected to exactly
match known measured maximum depths as ETOPO1 represents average depths over ~4 sq. km areas.
http://www.ngdc.noaa.gov/mgg/global/etopo1_ocean_volumes.html
Eakins, B.W. and G.F. Sharman, Volumes of the World's Oceans from ETOPO1, NOAA National Geophysical Data Center, Boulder, CO, 2010.
Scaling of the SST by basin to the NOAA NODC Vertically Averaged Temperature Anomaly is simply matching the linear regressions for the SST with the VAT for the overlap period from 1955 to 2012 then the scaled regression for the full 1870 to 2013 SST period can be used to approximate changes in 0-700 meter temperature and then 0-700 meter OHC.

The Indian Ocean does show some acceleration for that 19.8% of the global ocean volume.

In the Atlantic Ocean only the North Atlantic shows an acceleration for that 10.9% of the global oceans.  So for Anthropogenic Global Ocean impact you have acceleration mainly in two basins with a third trying to kick in some more.  The North Atlantic Basin should be one that would show the most land use/snow field reduction impact since most of the world's river flow volume ends up in the northern Atlantic.

Using surface temperature as a proxy of sorts for deep ocean temperature is far from perfect.  Since most of the deep ocean warming is due to mixing which reduces surface temperature, there will be plenty of shorter term fluctuation that are out of phase.  When the deeper ocean cools, that energy can be transferred to the surface somewhat bring the two in phase.  So how much useful information may be gained is a total crap shoot, but it is a fun comparison.

Instead of just scaling the OHC I thought it would be interesting to actually calculate the rough variation.  There are a few issues with my mass calculations likely due to not including the shoreline slope since the kg appears to be a little less than a percent high compared to the Rosenthal et al. 2013 values, but pretty close for this initial run. 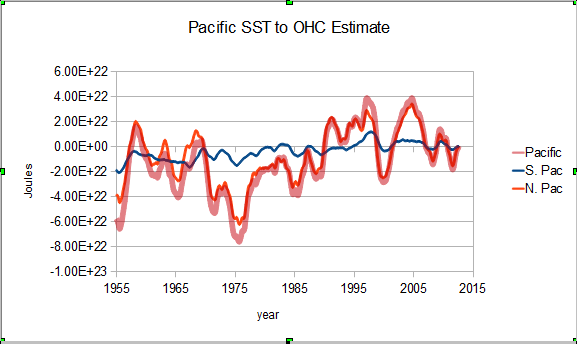 Starting with the Pacific, there is a lot more variability in the north which can be smoothed out, but without smoothing more that with a 5 year moving average it looks like this. 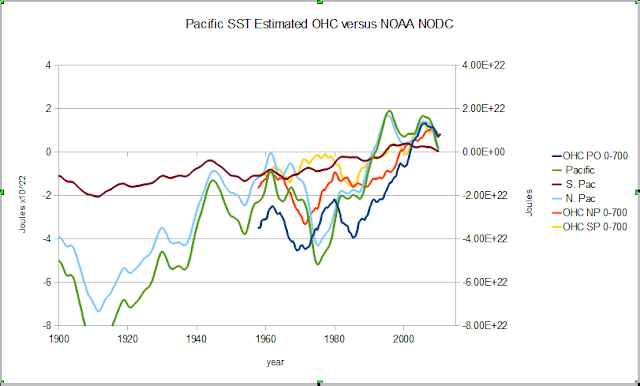 This is how it looks back to 1900.  It is kind of interesting to compare the 1900 to 1940 estimated energy regain to the current regain.  The noisy north Pacific would appear to contribute to "weather" while the stoic southern Pacific holds the climate in check.  The scaling could be tweaked but there is a lot of noise. 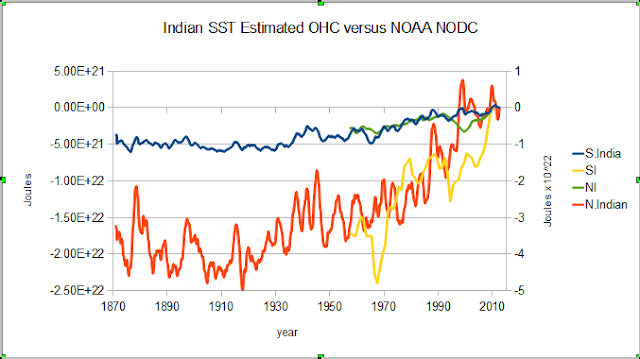 The Indian Ocean which has the highest correlation with GISS provides me with a little blind test.  Since the table from NOAA doesn't have the Indian separated by north and south I had to ratio the India to 18% north and 82% south to get this fit.  With that ratio there is only half of the Joules estimated with the SST as there is with the NODC OHC data.  Before checking on the actual distribution I will scale the Atlantic just to see how the coarse fits match NODC before getting too wrapped up in precision. 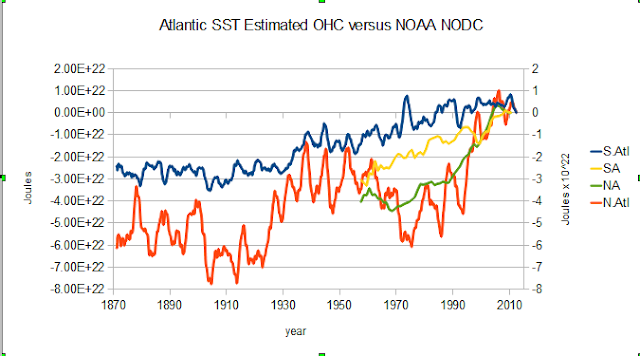 With the Atlantic the coarse fit is excellent for the north and the south has similar scaling required as the Indian Ocean.

One of the major issues with the SST masks I used is the southern and Arctic oceans are not included.  Including the polar oceans will require a more detailed masking which can also reduce the Caribbean and Gulf of Mexico areas being in the Pacific region with the initial quick and dirty masking.

This ends part one of this series.
Posted by Unknown at 8:49 PM