Precession and the Thermohaline Current 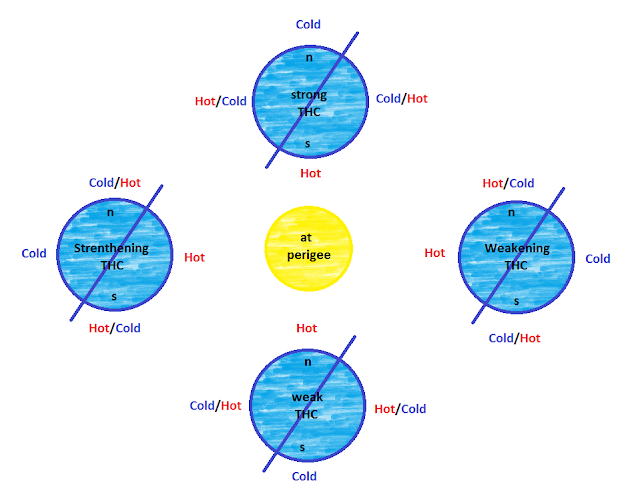 With a name like Redneck Theoretical Physics I should have more theory in the posts.  This blog started because of a search for Ice Age theories.  There are plenty but none other than the obvious Milankovic Cycles has gained any real weight.  Of all of the Milankovic cycles though one has the most interesting impact, the precessional cycle.  The precessional and obliquity cycles are "internal" caused by wobble.  The precession part is where the polar axis scribes a circle around polaris approximately every 21 to 26 thousand years.  Obliquity is where the diameter of the scribed circle gets bigger or smaller as the axial tilt increases or decreases.  Most focus is on when both of these cycles combine to produce the greatest northern hemisphere 65N solar insolation.  Ice ages require ice and that is the situation that reduces the ice the most.  But what about the rest of the 21 to 41 thousand of years?

The diagram above shows that, the neglected rest of the story.  Since Earth's orbit is not perfectly circular there is a +/- ~3.3% seasonal variation in insolation.  In Austral winter currently we have the strongest solar input which general causes all the Antarctic Sea Ice to completely melt.  That frees up the Drake Passage to move the most water which with the southern hemisphere oceans getting the highest insolation means the Thermohaline current Thermo, part is at its peak.  It can move more energy and move that energy more quickly and less deeply.  Warmer water is less dense even with the Haline or salt density to consider.  So in Austral Winter you should have the strongest THC both in terms of energy and flow rate.

As Austral Winter moves to Equitorial winter, which sounds odd, but a quarter way through the precession cycle the strongest solar insolation with be felt at the "Spring" equator, more Antarctic Sea Ice can survive longer reducing the flow of the THCslightly.  The more uniform temperature gradients between poles would also tend to shift the Antarctic surface winds throttling back the THC.  The change in flow would not be "abrupt" but the ocean and atmosphere would have to settle into a new "normal" meaning there could be some "abrupt" on a planetary time scale re-arranging.

Then as we move into the big kahuna high insolation 65N summer whatever ice is hanging around is much more likely not to be hanging around long.  Then that shifts into a hot Equatorial Summer/Winter period similar to ~10,000 years earlier but with a little difference.

The two equatorial Winter/Summers have the job of building the ice if we are to have an ice age.  A mild summer and winter would tend to produce more heavy lasting snow than a hot Summer and super cold Winter.  With a weak THC reducing heat transport north in the Atlantic you should have better odds of the snow sticking long enough to have over season accumulation.  It should take both the reduced insolation and the weakening THC to really build glacial mass.  In order for the THC to become "Weakening" would require it to peak.  This only gives the Glaciation process, without volcanic assistance, about 3000 to 5000 years to get the ball rolling.  Then depending on where and how much snow accumulates it may be able to survive the 65N peak insulation phase to reach a glacial maximum.

Of course with mankind around to busily clear snow it is unlikely that there will be a 21,000 year glacial cycle, but there could be.  With man around we may skip a few glaciations or possibly screw up and cause a major glaciation.  Hard to say really, but we likely will never see what we may have produced, a 21,000 year Earth Glaciation Cycle.

On that note, I recently posted a not very well received post on the precessional cycle "pulses".  Other than my typical sarcastic comments about over simplification and minion of the Great and Power Carbon conclusion leaping, it has a few charts showing "pulse" and the SH/Atlantic THC "SeeSaw".

So just to show that even Rednecks can have theories, let's see how this one makes the rounds.
Posted by Unknown at 8:49 PM