The Chicken or the Egg - Which Came First?

It is really fun watching different folks try to use "Global" data to try and figure out things like the "Effective Diffusivity" of the oceans to an atmospheric "forcing".  Dr. Roy Spencer has a new paper out and the regular denizens are attempting to rip it to shreds.  The paper uses a of course and compares the rate of warming of the oceans at different depths.  This is a nice approach but what exactly is causing what?

Since I am more into the internal oscillations than the "forcing" problem.  I thought I would take my usual contrarian view and see if there are some more fun twists that "forcing" and having the oceans respond and unbelievable fast rates despite their huge heat capacity and mass advantage.  One could think that possibly the atmospheric forcings are responding to the oceans. Most of the energy in the atmosphere is provided by the oceans and the majority of greenhouse gas in the atmosphere, H2O is also a product of the oceans.  This is of course bassakwards thinking relative to a bassackwards theory.


I am using the Climate Explorer version of the ERSSTv3 data since it provides simpler masking of the regions I like to look at.  Since I am not fond of the volcanic impact on seasonal issues my baseline is 2000 to 2012 which is relatively volcano impact free and since prior to nuclear submarines there was probably not much reliable data for sea surface temperatures above the polar circles in winter, I am limiting my masks to 65 degrees. 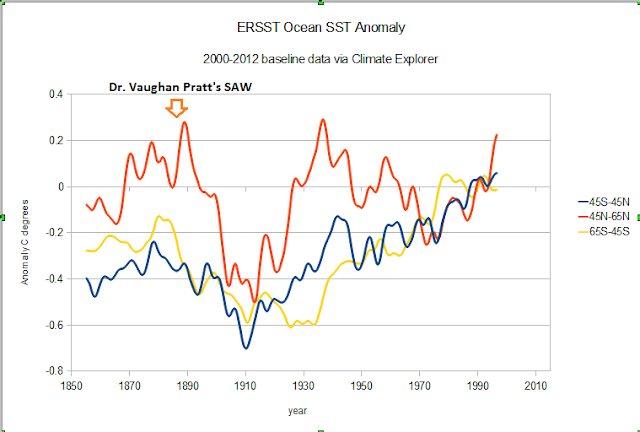 those familiar with Dr. Vaughan Pratt's AGU poster or his guest post on Climate Etc. "Multi-Decadal Climate to a milliKelvin", might recognize the Sawtooth shape of the 45N to 65N SST anomaly.  Of course to be an exact match I would have to creatively smooth the data to knock off some of the rough edges.  According to this there was a huge 45N-65N impact in the early 1900s that was felt "Globally" but the 45S-65S may have had a delayed response to part of that impact by 20 years or so.  The 45N-65N region rebounded quickly with the 45S-45N region taking 20 to 30 years to recover.  The oceans have a huge thermal mass which would take a while to "recharge".

Just to show that there are no Rabetts up my sleeves hear it the data in degrees C with no adjustments or raw plus a smoothed version overlay. 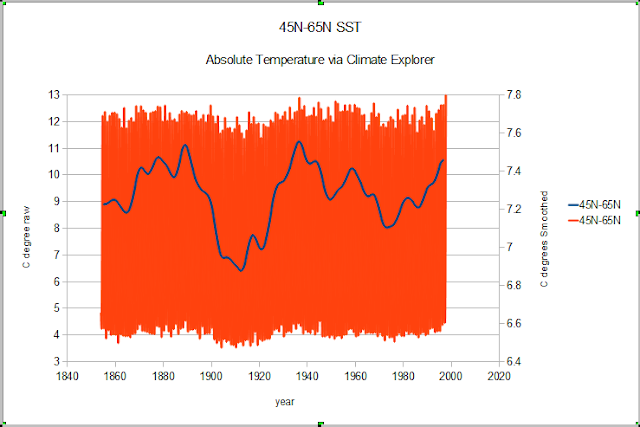 Based on the ERSSTv3 SST data in C degrees, the 45N to 65N region has almost fully recovered from the volcanic activity and lower solar irradiance between 1890 and 1918.  With the recovery of the SST, water vapor should increase with SST and since the atmosphere responses to "any" forcing, even the removal of negative forcing, the "global" surface temperatures which are amplified by the asymmetrical land/ocean distribution would rise.

Since the oceans from 45N to 65S respond slower due to more efficient mixing and the THC which force feeds the 45N-65N oceans, their recovery would be slower.  If you ASSUME that atmospheric forcing is completely caused by something other than natural recovery, then you could find yourself believing that the oceans recharge like the energizer bunny and everything but the SAW has to be due to the Great and Powerful Carbon.  Should you wonder why the SAW exists, you might find an alternate theory :)
Posted by Unknown at 11:42 AM