SST versus OHC - Some Explanations on Apples and Oranges

The objective of using volume based SST instead of area is to reduce some of the noise and to have a better comparison to Ocean Heat Content and paleo Bottom/middle Water Temperatures.  So the volume based total of the masked major basin areas will not be a perfect match for "normal" SST for a variety of reasons. 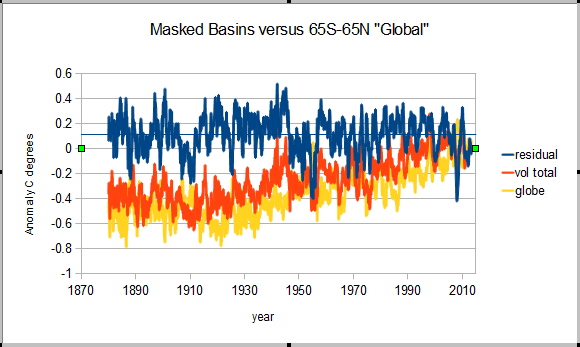 This compares the Masked volume temperature anomaly to the HadIsst 65S-65N "Global" temperature.  There is an average ~0.1C of residual "error" between the masked and "global".  There is virtually no trend in the error which is a good thing, and the "average" error is in the nominal standard error of the data.  Considering my masking is less than perfect, this is about what I would expect.  I can later fine tune the masking if need be, but for my purposes this is fine for now.

There is not a huge difference between the area and volume calculated basin temperatures. 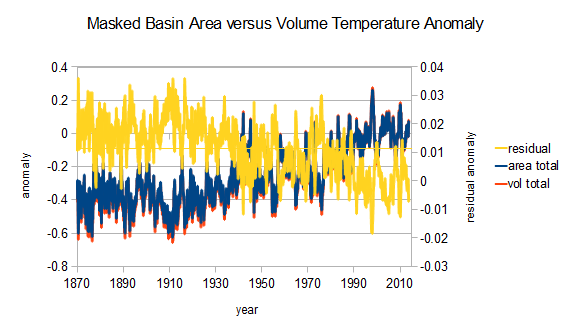 The average difference is about 0.01C and there is a trend due to seasonal cycle baseline more than likely, which is amplified a little by the different basin weighting.

With the volume weighting for just the five major basins I should be using only 87.1% of the total ocean volume.  Since I am using 65S-65N instead of 60S-60N I am actually using more, which is part of the larger error in the comparison first comparison.  I am not concerned with that error because it should show up as more "anthropogenic" warming/cooling or uncertainty in regions that don't have stellar data to begin with.  The "rough" estimate of OHC is not going to be all that accurate anyway and is mainly going to be compared to paleo which has a much larger uncertainty range.


When I compare with Hadsst3 or ERSSTv3b, the error is larger and has a slope. Since the early part of ERSSTv3b has a larger error margin and the seasonal cycle selection by ERSSTv3b includes a period with higher volcanic activity, this is pretty much to be expected and highlights the reason for the 2000-2012 baseline.

Since I an not particularly interested in shorter term noise this chart compares the individual basin volume contributions to the estimated "Global" ocean temperatures to the GISS 65S-65N 250km interpolation "Global" surface temperature using 11 year trailing averages.  The ultra-long range interpolations to eke out polar noise just adds useless complexity to an already complex problem.  The actual liquid portions of the globe oceans should be a much more reliable reference for total energy.

So just for early warming, the "temperature" anomaly I am using should not be directly compared to "Global" anomalies without consideration of the differences.
Posted by Unknown at 6:32 AM