My pet peeve with climate science is that there is no good definition of "normal".  Climate and weather are constantly changing.  Since it changed before mankind had a chance to do much, a large portion of the change would be natural.  With man kind modifying nearly 10% of the total area of the Earth or nearly 33% of the land area of the Earth, just for agriculture, mankind has undoubtedly had some impact on climate.  Comparing current climate to past should help separate "Natural" from Man made climate impact if we could more accurately determine what past climate actually was.  Above is the University of Alabama, Huntsville Microwave Sounding Unit Lower Troposphere temperature  data using a 1978.99 to 1990.99 average reference baseline with centered 61 month (5year) running mean smoothing.  Using this data base, since the start of the satellite era, the global lower troposphere has warmed by ~0.3 C degrees and the northern hemisphere land has warmed by ~0.5 C degrees.  Most of the warming has been over land and most of the warming has been in the northern hemisphere.  Using this baseline, only one point in the 1985 time frame has all of these data series at the same relative temperature anomaly.  Comparing the satellite era data to the common 1961 to 1990 paleo reconstruction baseline or the 1951 to 1980 surface instrumental data baseline would indicate a range of ~0.2 to ~0.5 degrees at the end of the comparison which was 2012.25 for this chart.

Using the same data set but regional data instead of the global and hemispherical, with the exception of the northern extra tropics, the range would be 0.1 C degrees if the data were combined to any paleo climate reconstruction of the surface instrumental data set.  This chart does not include the polar regions because the satellite data is incomplete.  The surface station data is also not complete in the polar regions, so to make an apples to apples comparison of satellite data to surface instrumental data or paleo climate reconstructions, the polar regions should not be included in direct comparisons.  Note that in this chart, there is no point where all the data series share a common anomaly.

This is the same data with the averages removed and the NoExt shifted to the secondary axis.  Mean value lines for the ocean portion of the data was added.  Note that the SoExt and NoExt mean values are aligned indicating that the NoExt, "caught up" and passed the SoExt and Tropics.  Climate has internal oscillations that impact different latitudes at different times and in different amounts.  If I re-scaled and averaged these data sets allowing for this relative "wave" of oscillation, the mean of the globe, excluding the polar regions would be approximately 0.08 C degrees above the 1979.99 to 1990.99 mean.  Whether that is the most appropriate mean is hard to determine, but 0.08 versus 0.30 is a huge difference considering total global warming from the start of the industrial age is estimated to be approximately 0.8 C degrees.

Since the satellite era data is arguably the best we have, the satellite era should arguably be the default choice of baseline for comparison to past climate, whether determined by paleo reconstruction or surface instrumental readings.  You really wouldn't want to catch the wrong wave would you? 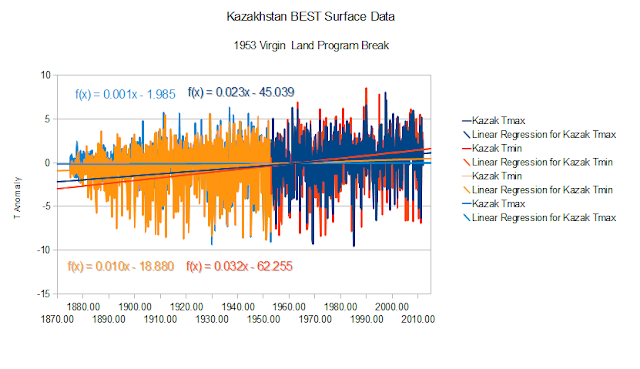 Since my personal bias is that stupidity caused most of the man made climate change, the chart above is for what I believe is the stupidest of land use programs.  The former communist Soviet Union's virgin lands campaign which started in 1953.  There are linear regressions up to and after the 1953 brain fart.  Notice that the BEST data Tmax was flat as possible before the collective farming and enslavement initiative.  If you compare the before and after slopes, both increase by ~.2C degrees per decade after the start of the rape of some of the most sensitive high Steppes in the world.  In this particular region of the world we have things not related to fossil fuel use increases in atmospheric CO2 levels.  We have ambitious land use. 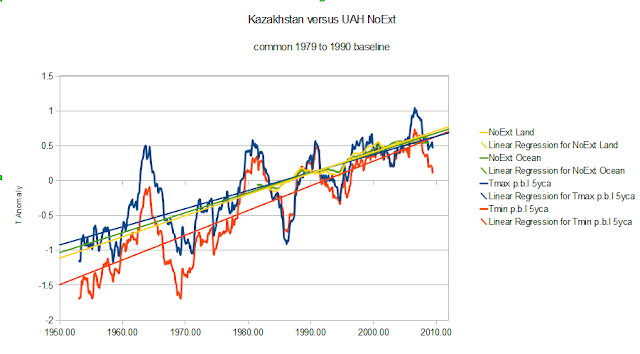 To compare apples to apples, here the BEST data is shifted to the p.b.l. with 61 month (5 year centered) smoothing.  The Tmax very closely matches the slope of the UAH NoExt data and the Tmin slope appears to be catching up to the Tmax.  CO2 climate forcing would have a greater impact on the Tmin in case you were wondering.  Prior to the Virgin Land debacle, Tmax was stable and Tmin was rising. 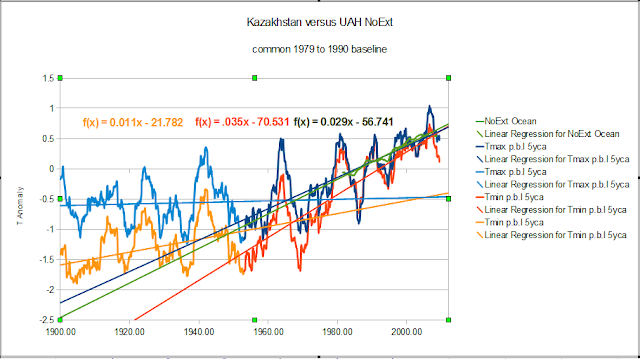 Just to complete the picture, this is the BEST data for Kazakhstan compared to the NoExt oceans.  The northern hemisphere oceans were warming well before the "global warming" mania due to recovery from the colder period of the Little Ice Age.  The warming in Kazakhstan accelerated with the collective farming of over 30,000,000 hectares of virgin steppe being converted to wheat fields with no consideration of the impact of erosion in the near desert environment and the majority of the water flow to the once 4th largest fresh water lake in the world being diverted for irrigation.

Most of the organic carbon in those virgin lands was lost to erosion in the communist equivalent to the dust bowl.  The ability of those lands to sink carbon was lost for decades and is only now recovering because the agricultural failure was finally admitted by the no longer communists in charge.

From Wikipedia, Aralkum, the desertification of Virgin Lands.  Is that because of CO2 or because of stupidity?  If you chose the wrong baseline, it could be an effect not a cause, pretty much like the catching the wrong wave.  It would appear that for one region of the globe that was warming faster than the rest of the globe, land use may have had a negative impact on climate.
Posted by Unknown at 8:36 AM