Standard Deviation as an Estimate of Climate Sensitivity

The noise in the temperature records may not be as much of a pain in the butt as many believe.  Each region of the Earth responds to various perturbations creating that noise in the data.  The average response to all perturbations should be indicative of the general sensitivity of that regional climate to various forcing changes.  Or the data could suck :)

I used a 20 year period for each of the sequential standard deviations just make sure that the periods would be acceptable trend lengths.  The start year, 1960 was selected because the  64-90S data frankly sucks prior to 1958 and really should not be used in the global mean calculations.  The polar regions, especially the northern, have much larger deviations than the majority of the regions.  What is interesting is that from the northern tropics to the southern oceans, the standard deviation is remarkably stable.  A rough average of all the standard deviations, excluding the poles would be approximately 0.18, but than may not be very helpful. 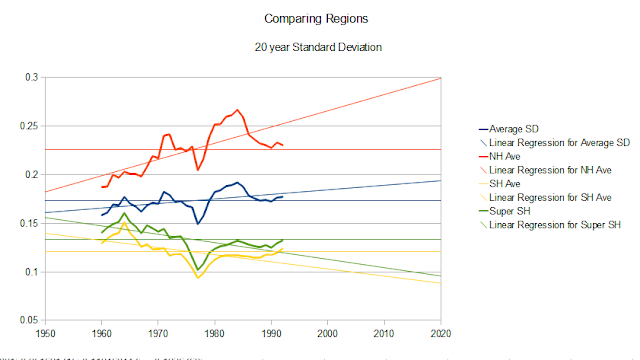 So here I have averaged the Globe ex poles, NH, SH and have what I call the Super SH which the full equator plus southern hemisphere.  Because the NH is so much more variable, the global trend is biased to a positive slope which is the reason for the Super SH.  That should indicate the general trend of the majority of the thermal mass, a trend towards more stable climate.