Most of the tropical oceans had small, ~2C variation of the past 200,000 years.  The majority of change in the glacial periods was near the poles.  I have scaled 65N estimated solar variation with the EPICA CO2 for this chart just for reference.  I haven't verified how accurate the estimate is so far, or how well I repaired the spread sheet borrowed from the WUWT post Milankovic Cycles Defended.  The interesting thing in this chart is the Mohtadi et al reconstruction has a longer positive slope in the temperatures and sea level (in light blue) than many reconstructions.  CO2 change clearly lags the Calvo southern Australian SST reconstruction and there is a blip at ~19 k years in the Mohtadi SST data. 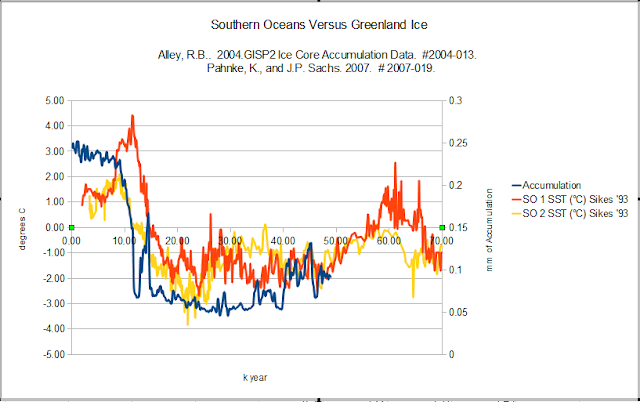 The Mohtadi 30 ka slope change aligns with the Pahnke and Sikes Southern Ocean shift with the 19ka also roughly aligning with the exit of those shifts.  Those shifts are likely due to Antarctic Circumpolar Current changes which is what I have been looking for.  The 30ka period does have solar as a possible major factor where we would have reduced SH solar timed with reduced SH temperature possibly cause larger impact.  Note in this chart is the dark blue Greenland ice accumulation which is likely an indication of whether the Arctic was iced in or more open.

This is just a memo post to keep trace of things.

This is kinda messy, but I added the Tierney '10 Lake Tanganyika back to 60 k years BP.  This shows a little better the tropical range of temperatures which are extremely stable.
Posted by Unknown at 4:03 PM