One of the commenters on Dr. Curry's blog wanted me to simplify the chaotic patterns of various tropical ocean reconstructions compared with the EPICA CO2 record and the 65N solar insolation model.  It  is not all that easy for me to do, but I gave it a shot.  Because the samples of the the various SST data have different ages determined by C14 carbon dating and the number of samples per time period vary, the "Average" SST is at best a rough estimate.  What I did was average 10k year ranges and then average the averages.  While I think I have the done that without too many mistakes, I am not guaranteeing the accuracy or even the relevance of the reconstruction.  It is just an illustration of the mystical chaotic interactions of widely space ocean heat capacities. Because of the inconsistent ages of the samples, the age of the "average" varies by +/- 3K years roughly, so be careful. 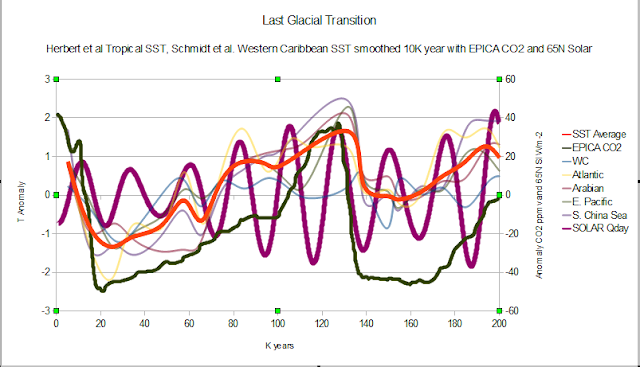 I enlarged the "Average", EPICA and 65N solar leaving the original reconstruction "averages" muted in the background.


UPDATE:  This is a average that uses only data within ~2000 years where all series have valid data for that period.  The plots are steps showing transitions between sample and not smoothed.  There is a little difference between the two, but not that much. 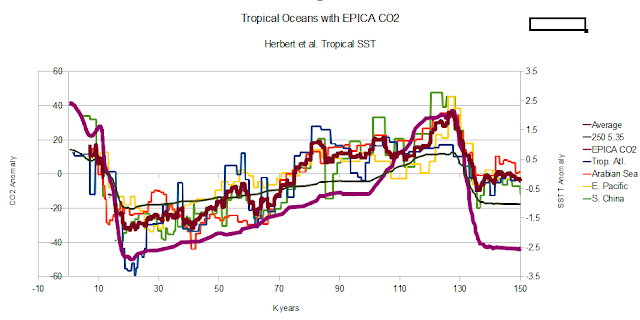 This is a snapshot of the 110K to 150K period in the chart above without the averaging or smoothing.  You will note that there is about a 3 to 5K year difference in the alignment of the curves, some don't assume much in the way of lead/lag relationships from the simplified chart.  That would require an much better procedure or more uniform data which I may be able to interpolate a little better, but don't count on that.