It is Not Rocket Science 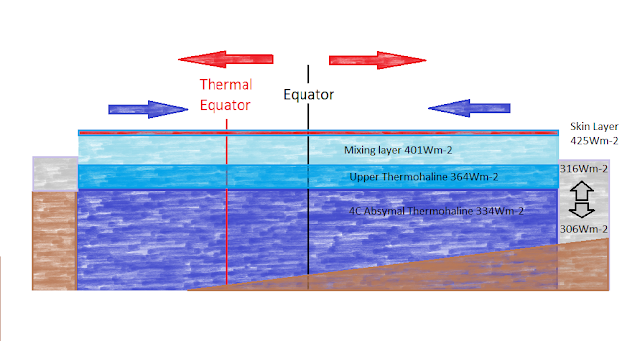 More like Aqua science really.  That is a basic static model of the oceans.  The skin layer is a little controversial.  According to the AQUA satellite data, about 21.1 C degrees is the average temperature of the ocean surface skin layer.  Since the experts prefer to use radiant models, what the satellites "sees" is what the average photon would "see" and what should be used so that apples get sorted with apples.  The effective radiant energy of 21.1 C would be about 425 Wm-2.

For the mixing layer I have used 17C as a rough average which would effectively radiate at 401Wm-2.  Since that layer is between 30 and 150 meters deep, there is not a lot of radiating going on, but the effect radiant energy is convenient.

The "upper thermohaline" is using some liberties. There is though a stratification layer between 700 and 1000 meters that tends towards this average temperature, 10C with an effect energy of 364Wm-2.

The 4C abysmal thermohaline is a little more conventional.  The 334Wm-2 effective radiant energy of 4C has that remarkable coincidence or appearing to be related to the 334 Joules per gram heat of fusion of water and the maximum density temperature of fresh water.

The little model has a red "Thermal Equator" to remind everyone that the sphere we live on is not uniformly spherical in a heat capacity sense, more egg shaped.  The atmosphere though is more symmetrically related to a pure sphere in an energy transfer sense.  With most of the thermal mass, solar insolation and stronger atmospheric circulations in the southern portion of the global, it should make a better frame of reference for analyzing heat flows.

The difference between the 425 skin layer and the 401 mixing layer 24Wm-2, represents a range of uncertainty.  Under calm surface conditions, the effective radiant energy would be closer to the 425 and under high surface wind conditions closer to the 401Wm-2. 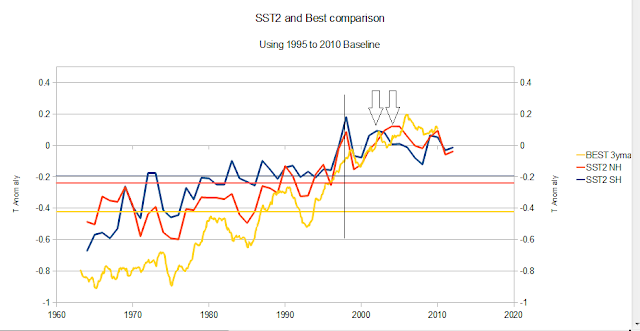 This is added just to show some of the delays caused by the asymmetry of the pool.  The 1998 Super El Nino is a good perturbation to follow and here I aqm using BEST land only using the 1995 to 2010 baseline that everyone loves so much.  The corresponding peak in the BEST data is a decade later than the perturbation.  The SH SST first harmonic is about 4 years after with the NH about 3 years after the SH harmonic.  The mean value lines for all three series is from 1880.  So if the oceans are settling into what appears to be a comfortable heat capacity, there should be approximately a 0.2C lowering in average temperature from the 1995 to 2010 average by 2020 to 2025.  Volcanoes and the longer solar minimum could reduce that a bit.
Posted by Unknown at 8:34 AM