The Earth orbit around the sun is less than perfect.  The variations in orbit are used to explain the massive glacial periods and inter glacial periods.  The chart above has the Milankovic Cycles plotted as solar forcing at latitude 65N in blue compared to various tropical ocean surface temperature reconstructions.

I got the data to plot the Milankovic cycles for the spread sheet in a post at Watts Up With That, "Onset of the Next Glaciation". and the Sea Surface Temperature data form the NOAA paleo website. 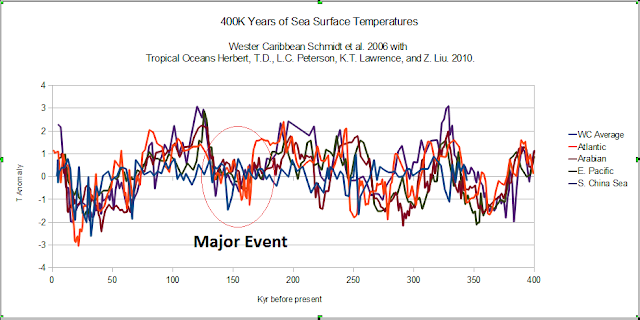 In this chart I have just the sea surface temperatures which show that there was a major event of some type around 150,000 year ago.  That event only changed the average SST by about one degree C.  The range of temperatures if averaged is only about +/- 2 C degrees for the past 400,000 years.  The event timing jives with the Vostok ice core temperature and CO2 concentration data.  The next coordinated "event" is around 360,000 years ago in the SST data.

Courtesy of the NOAA paleo site again, Luthi, D et al. with the funky u put together a nice reconstruction of the Antarctic CO2 concentration which I have added in large red.  I made no attempt to scale, just used the secondary axis a let fly.  As you can see there is a fair correlation of CO2 with SST, but it is not apparently driving climate, at least in the tropical oceans.

Since the sample ages are inconsistent between data sets, it may take me a while to do a proper analysis, but then that is not my yob mans.   I am sure some grad student somewhere would love to take this ball and run with it.  If they figure out the fine details of the Milankovic versus CO2 theories, they may get a decent grade.

Just to give them a good start, the plot uses just the Western Caribbean surface temperature data with the Antarctic CO2 and Milankovic cycles.  The smaller fluctuations in the WC temperature near and above zero appear more related to solar fluctuations and the larger somewhat erratic excursions below zero may be related to internal conditions.  With the exception of the most recent 40k years, the WC temperature returned to "normal" rather quickly.  The correlation between Antarctic CO2 Western Caribbean SST is not impressive.
Posted by Unknown at 10:26 AM