I have been told that this cannot be done.  So I will take some baby steps showing what is going on with this crazy plot of mine.

Neukum Et Al. have a Southern South America temperature reconstruction that I think is a pretty decent reconstruction to use.  I am sure it is far from perfect, but it looks useful.  The Satellite data is arguably the most accurate of averaging large area temperatures, though the data is not a surface measure, it should naturally average variations in surface temperature.  The oceans, due to their larger thermal mass would also naturally average temperature fluctuations.  So starting with the better data and working back in time makes perfectly good sense to me.  We are after all comparing less than perfect indications of temperature. 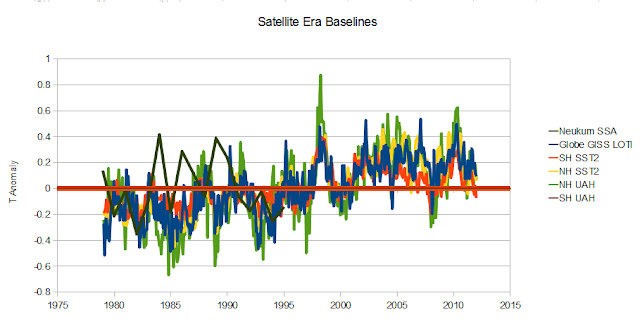 This is the baseline that I will be using, 1979 till present for all data sets.  The Neukum et al. ended in 1995, so this plot is just to show where the 1979 to 1995 SSA reconstruction baseline compares with the UAH SH oceans 1979 to 2011 baseline.   The mean value of the two is a close to a perfect match as you can get. All of the data sets listed were adjust to the 1979 to present baseline, present being through 2011. 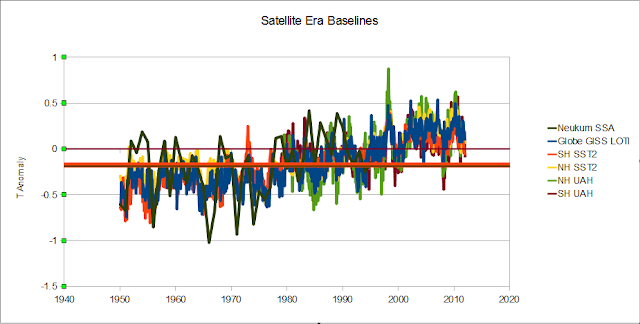 This plot extends the SSA, GISS and HADSST2 data back to 1950.  The growing season temperatures of the SSA reconstruction still fit well with the HADSST2 southern hemisphere data which should be more closely related to temperature changes in Southern South America. 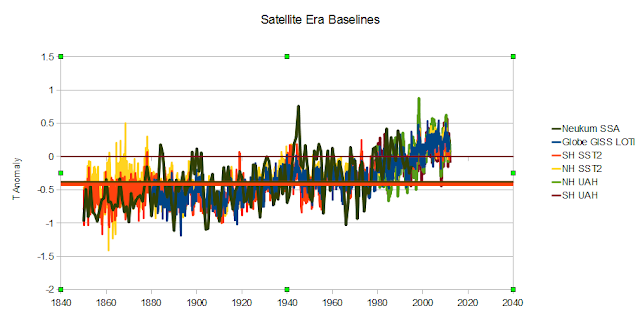 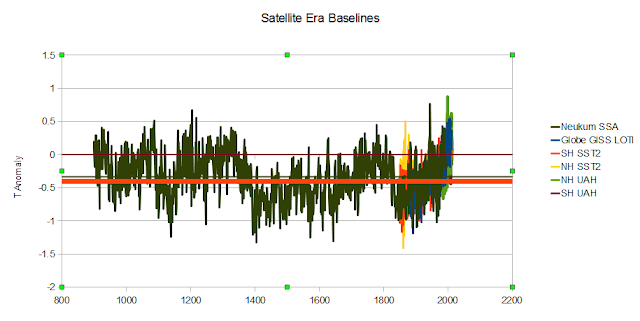 This is the full series for all of the data.  Without smoothing any of the data, the hockey stick does not look all that intimidating.  The average for the satellite era is about 0.35C above the average of the  SSA and HADSST2 SH series.  The dark red SH UAH Oceans mean value line appears to be in the "high" normal range of the Neukum et al. SSA reconstruction.  So while this method of "splicing" instrumental data to paleo reconstructions may not be statistically perfect, it should not be overly misleading or biased when attempting to estimate ocean temperature changes.

There are a few other southern hemisphere and tropical temperature reconstruction that should be fairly closely related to ocean temperatures which should be a reasonable baseline for estimating past global temperature change not overly related to land use and ice sheet changes.
Posted by Unknown at 8:32 AM