Most of my climate curiosity is focused on the Southern Ocean and North Atlantic Ocean relationships with climate.  So I am playing with some reconstructions.

ABSTRACT:
Late Quaternary climate fluctuated between extremes of glaciations, lasting ~90 kyr on average, and interglacial episodes, lasting ~10 kyr. Still largely unknown are the spatial and temporal evolution of these global climate states, with vigorous debate still underway on the mechanisms responsible for glacial inceptions and terminations. Though it is widely believed that the Southern Hemisphere oceans play a central role in global climate changes, few paleoclimate records exist from there. Here we present three new alkenone-derived SST records from the midlatitude Southern Hemisphere spanning the last 160 kyr, a full glacial-interglacial cycle. Our subtropical SST records from the last glacial period are characterized by (1) warming 47–23 kyr B.P., when high latitudes in both hemispheres cooled, and (2) milder temperatures during the penultimate glacial period than during the last glacial interval. These SST features are found to be of tropical- to subtropical-wide extent, implying increased thermal gradients at times of high-latitude ice sheet growth. This has implications for the vigor of atmospheric and upper ocean circulation and the transport of heat and moisture to the poles that may have been instrumental in the growth and maintenance of polar ice sheets during glacial periods. 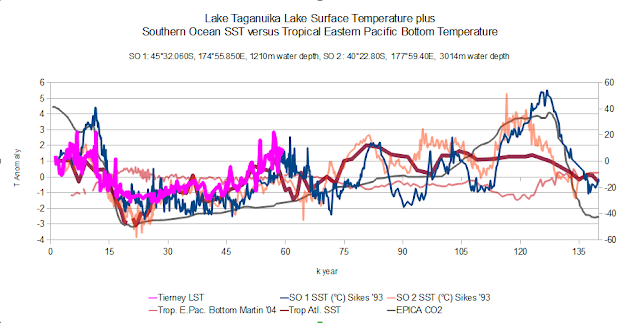 Here I added the Tierney Lake Tanganyika Lake Surface Temperature 60K year reconstruction that I have used before.  There is a good correlation with the southern ocean reconstructions. 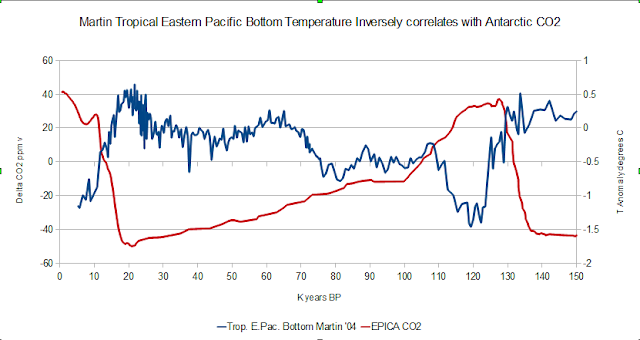 Here is the Martin et al. Tropical Eastern Pacific Bottom Temperature with EPICA CO2 showing the inverted relationship.  The Super La Nina aspect of climate or the modulation of the Antarctic Circumpolar Current (CPC) is pretty hard to discount. 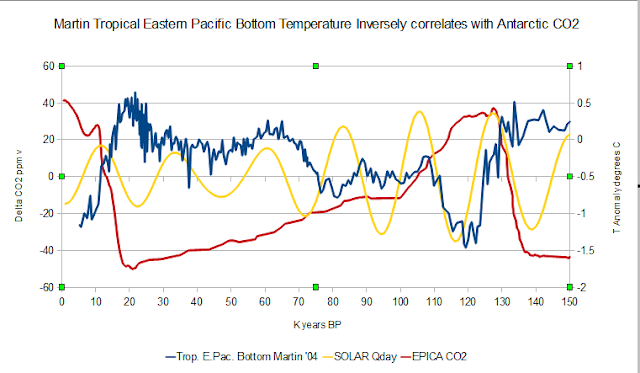 For the Cyclomaniacs and the "Sun Done It" crowd.  The internal oscillations of the oceans, when complimentary to an external forcing, have the expected impact.  However, when external forcings are out of phase with internal dynamics, more subtle relationships prevail.
Posted by Unknown at 7:05 AM