CO2 is one of the few atmospheric forcing components we have a reasonable handle on.  A doubling of CO2 will produce about 3.7Wm-2 of atmospheric forcing, which based on a temperature 255K degrees (240Wm-2) a temperature increase of approximately 1 C degree.  If you live in an area that has an average temperature of -18C degrees (255K), then you can expect about one degree of warming per doubling of CO2.  Anything more or less requires help in the form of amplifying or dampening feedbacks.

Since zero C is the freezing point of water, that other greenhouse gas, if you live in an area that has an average annual temperature of zero C can can expect a little bit more warming due to CO2.  As temperature and water vapor increase, the impact of CO2 decreases.  This is the reason for the polar amplification often mentioned and the less than expected warming over the oceans and in the tropics.  If you don't want to take my word for it, you can find a number of sources, but that is not the main point of this post.

The Carbon Dioxide Information Analysis Center (CDIAC) has a ton of information on CO2.  There have been direct measurements since 1959 at Mauna Loa in Hawaii, but longer term CO2 measurements are generally dismissed for some reason or another.  Since Fossil fuel use is the culprit that is supposed to cause the CO2 increase, there are good estimates of fossil fuel use going back to 1880 available at CDIAC plus some data of land use contributions to atmospheric CO2.  Using that data I have piece together an approximation of Anthropogenic contributions to CO2.

The typical formula used to calculate CO2 impact is T=5.25*ln(Cf/Ci) where T is temperature in C or K, Cf is the final CO2 concentration and Ci is the initial CO2 concentration.  Ci is generally assumed to be 280 ppmv based on various paleo exidence, primarily ice cores.  Other paleo proxies for CO2 indicate that Ci could be closer to 300 ppmv and there is some uncertainty. 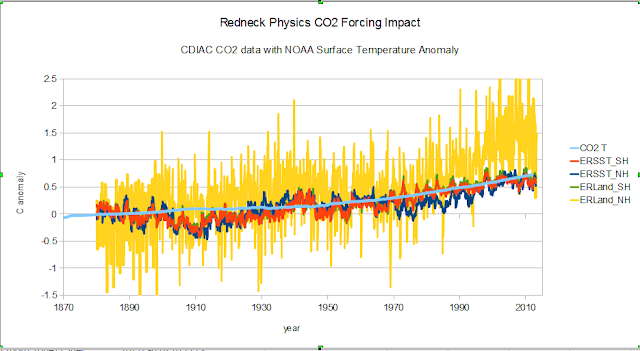 This is what my little comparison of CO2 forcing extended back to 1880 looks like.  The CO2 cocentration from 1959 to present is just the Mauna Loa.  From 1880 to 1959 I used the ratio of the CDIAC fossil fuel plus land use to extrapolate CO2 concentration.  That required an exponential factor (Cf/Ci)^.075 to fit the 1959 CO2 to an approximate preindustrial 280 ppm.

To "fit" the ln(Cf/Ci) to the ERSST data required one main adjustment, I had to use 2.25 instead of the 5.25 multiplier.  I also adjusted the preindustrial concentration to 285 instead of 280 ppm to tweak the fit.   Since pre-industrial is assumed to be normal, I used a 1880 to 1900 baseline for the temperature anomaly.  You can see how the Northern Hemisphere land which has plenty of areas between -18 and 0 C warmed better than the SH and ocean temperature data.  Generally, the more alarmist of the CO2 aficionados will use the most noisy NH land data in an effort to make their case that CO2 is a danger to the world.  CO2 may be a danger, but it appears the danger is a good bit overly stated.

Now for the interesting part,  the 2.25 versus 5.25 is a pretty big difference.  A little less than half of the expected value.  Instead of 3C per doubling the value would be 1.55 C per doubling.  This seems to be the more popular current estimated range for transient climate sensitivity to a doubling of CO2.

Please note that this estimate did not consider any recovery from past ice ages and assumes that 1880 to 1900 is "average". Allowing to amplification due to recovery from a little ice age should reduce the "sensitivity" to 2XCO2 since there would be less of that -18 to 0 C land to warm up.

If you are a fan of the higher sensitivity,

You can see that the 5.25 multiplier can be useful.  The correlation is not as good, but it does make a nice visual.
Posted by Unknown at 12:18 PM