UPDATE: Dang it! One of the Charts got lost in the upload:

"The lack of any significant warming in the tropical troposphere since the beginning of space observations in 1979 is particularly intriguing in particular as present models show a warming trend over the same time of 0.3-0.4°C in the average, figure 2. Such results, scientifically very puzzling as they are, have hardly received any media attention but instead the public has been overwhelmed in recent years by excessive reports of a rapid and threatening global warming very soon running out of control, unless the most drastic steps are taken to stop it".– Lennart Bengtsson via Climate Etc.

This is a portion of a paragraph copied from a post on Climate Etc. (linked above).  The Tropical Troposphere "hot spot" is a warming that should be due to the increase in CO2 concentration.  It would be a signature or fingerprint of the effects of the CO2 and other Well Mixed Greenhouse Gases (WMGHG).  Not being evident in the satellite data is a bit of an issue.  Since it is one of the "fingerprints", its existence would be verification of the GHE theory.  However, its not being there is not "proof" that the GHE theory is not valid.

That may sound like double talk, but with as many factors that can impact climate, the missing tropical troposphere heat does deserve a bit more attention.

First, the hot spot is projected in the models.  The models make quite a few simplifications in order for the programs to run more quickly.  If the models included every detail, there would be little information available because "runs" could take years.  If the simplifications work, great.  If they don't, you should figure out why, fix the problem and start over.  Of course, the data could also be wrong.  Suspect data was the first choice of the modelers and suspect models was the first choice of the data gathers.  Since I could not possibly care less about the models, I looked at the satellite data in a number of ways to estimate its usefulness.

The satellite data is impressively useful.  I am not going to quibble about the absolute accuracy, but the data is much better than I would have ever expected, so the satellite era is my choice of baseline.

This chart is the UAH Tropical Lower Stratosphere with the normalization and inversion torture explained in a previous post.  The Stratosphere is likely the best reference we have for climate since is responds quickly and naturally smooths responses.  Smooth is not a term many might use for the Stratosphere data, but if you consider all the gravity waves and vortices constantly happening the stratosphere, that is very smooth data in comparison.  There are four natural events marked, two Volcanoes and two El Nino Southern Oscillation events.  In the Tropics, all of these events lag the initiation of the natural events.  The valley following Pinatubo which erupted in 1991 is close to 1993, the 1998/99 Super El Nino valley is close to 2000.  There is about a two year lag with some variability.  Part of that lag is due to the centered 25 month smoothing, but the monthly data is there for comparison. 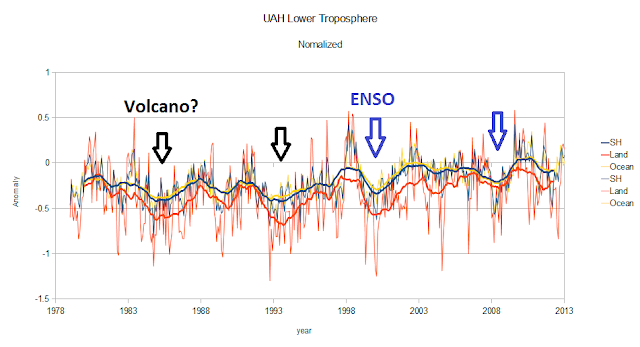 With this Southern Hemisphere tortured Lower Stratosphere Troposphere you can more clearly see ENSO event cycles and with the exception of the land plot, volcano impact is a little harder to pick out.  The Antarctic is included in the SH land area and tends to amplify the land response.  .

Here is the Southern Hemisphere Stratosphere with the two Volcanic black arrows still plain to see, but the ENSO events are nearly gone. 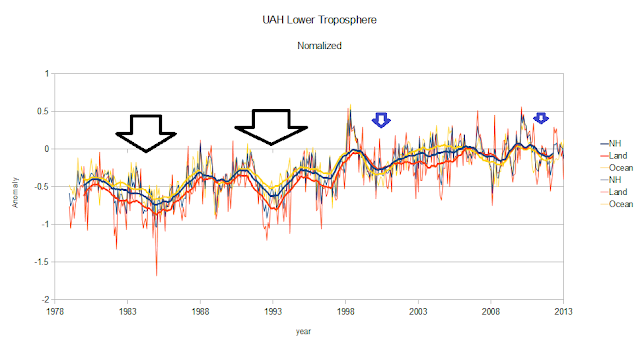 Since I had to edit anyway, this is the NH Lower Troposphere showing how smoothed the impacts are in the LT Oceans versus the LS.  That should be an indication of internal ocean heat transfer stabilizing the impact of the Volcanic events.  Notice how the ocean temps vary more with the ENSO events.

Globally, the volcanoes show up nicely but the ENSO events are smoothed pretty much out of the picture like in the SH chart.

Now here is the chart for the "hot spot".  There is a major debate over whether the UAH tropics are accurate, but based on this normalized comparison, it would be hard to pick out any significant difference between the lower and mid-troposphere data.  Again, there is more stratospheric sensitivity to volcanic and about the same ENSO response though with slightly different timing.

With this chart of the Northern Hemisphere oceans, there is some mid-tropospheric warming, but this is not the tropics, just part of the tropics combined with the rest of the Northern Hemisphere oceans.  The black volcanic and blue ENSO arrows show the events.  From this look, the volcanic events had a longer term impact than the ENSO events.  Because of timing, the Super El-Nino is given credit for the  "step" warming in the Northern Hemisphere.  Judging intensity using the yellow Stratosphere curve, the "step" appears to be more likely due to volcanic temperature depression prior to the Super El-Nino.  Because of the Lag in surface response following the Volcanoes, it is likely the total impact or "forcing" of the volcanic aerosols on the northern hemisphere was under estimated and the Super El-Nino impact over-estimated.  This particular period could be 70% or more, "natural" warming "noise".  With heat being transferred from the tropical and southern oceans to "restore" energy lost during the volcanic events, the only "signature" of the GHE is the predicted, just lost in the natural noise, tropospheric warming.

The satellite data is appearing to show exactly what it should, a series of natural events hiding a lower than estimated GHE impact.  Time series can be tricky though.  Still, this looks like the missing tropical troposphere "warm spot".

I hope this wasn't too boring, but it is a little hard to follow without a number of steps.  While I will save it for later,  there may be a way to estimate more accurately the percentages of natural and anthropogenic impacts on the oceans.  There is a fairly accurate absolute SST and the Northern Hemisphere oceans have a better long term instrumental record, so that might be a fun puzzle for a windy or rainy day.
Posted by Unknown at 7:07 PM