Fun with Data - The Land Only Greenhouse Effect

While I prefer the Lower Stratosphere Data, the "surface" temperature data and the Lower Troposphere can be fun to compare.  The GISS "surface" for land is taken at not very uniformly distributed locations at about 3 meters (6 feet) above the actual "surface" at a variety of elevations with the "average" elevation around 680 meters.  The Lower Troposphere data is "filtered" and "weighted" from approximately the "surface" to around 5000 meters in altitude.  Despite totally different challenges they provide fairly accurate, +/- 0.2 C degree temperature anomalies for their not all that well defined "surfaces".

For GISS, the "average" temperature anomaly is the daily maximum - the daily minimum divided by two.  This has become "THE" indicator of climate change.  With the satellite era, there has been some grousing that the satellite "surface" data is not the same as the land "surface" data.  They should be different, they are measuring different "surfaces".  While they are measuring different "things", the trend relationship between the two should mean something.

The only thing that changes differently between the two is the amount of CO2, H2O and "other" stuff floating around in the atmosphere.  Since GISS is at "THE" surface and UAH is near "THE" atmospheric boundary layer, the biggest differences should be clouds, aerosols and CO2 in that order.

There is considerable uncertainty in this comparison, but the difference should roughly approximate the atmospheric changes influencing temperature.  That 3e-02 is about 0.3 Wm-2 per decade or 3 Wm-2 per century.  If 3.7 Wm-2 produces 1C of warming, the 3 would produce less, ~ 0.8 C of warming.  Not a very accurate estimate, but in the general ballpark of the "no feedback" climate sensitivity for whatever that is worth.

The common trend would likely be due to something else.  Remember there is that whole tropospheric hot spot thing that is supposed to happening that is not.  If this trend difference is meaningful, then is should be approximately equal to the ocean energy imbalance. 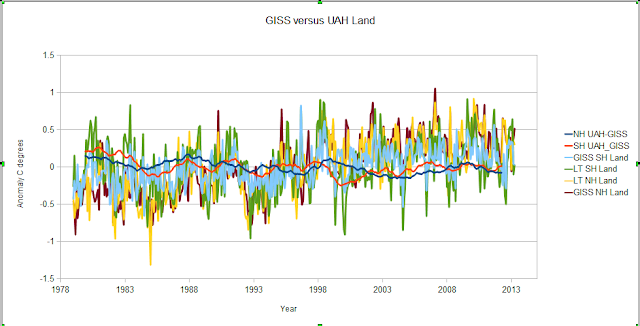 Since Land only seems to be the big thing, this compares the hemispheres by the land only data.  I used UAH minus GISS this time, but note the similarity in the trends.  The trends are not pronounced enough given the noise and uncertainty to be significant, but that is a pretty strong correlation between hemispheres.

Now think about the differences between comparing the land to ocean rate and the land to lower troposphere rate.  Two different frames of references with atmosphere as the conduit.

I could do the same with the oceans, but there is such a small difference because SST has less variation that it is not of much use.  That is were the Stratosphere comparisons have a large advantage. 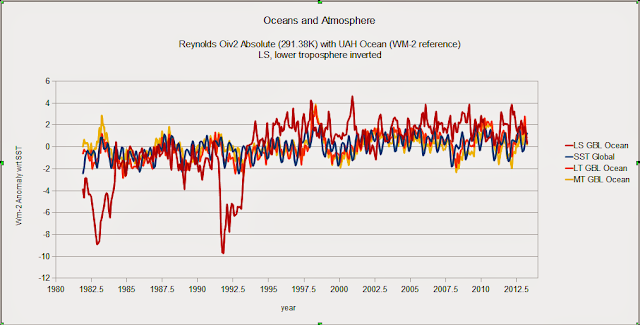 As you can see in this comparison, the surface, lower and middle troposphere are extremely close together.  Too close to confidently tell some event from instrumentation noise.  The lower stratosphere amplifies the signal naturally allowing a more realistic comparison.  This by the way was adjusted to the surface energy anomaly based on the absolute temperature.  By adjust all of the data sets to the same absolute temperature, this shows a "relative" response to a variation in surface energy anomaly.  While it is a bit noisy, you may be able to make out the "approach curve" shape in the LS data.

The values are still too coarse for much precision, but it is a neat way to make better use of the available data.
Posted by Unknown at 9:12 AM