Have I found it?  Likely not.  Since the average altitude of the land mass is 680 meters above sea level and sea level likes to change, there is likely not a meaningful global surface temperature that everyone could agree with.  I personally would like a better estimate of some surface temperature, so I made my own using NOAA's Extended Reconstructed Sea Surface Temperature and the Berkeley Earth Surface Temperature project data to date.  BEST is putting together a combined Land and Ocean data set, but I just could not wait.

Using the Reynold's Optimally Interpolated SST data version 2, so hopefully this version is actually optimum with a baseline from November 1981 to March 2013 I "adjusted" the ERSST data from 1880 to present for 90S to the equator and for the equator to 90N.  Of course as you approach the 90s, data quality gets worse.  I haven't bothered with error bars, but I came up with some numbers.  I did the same thing with the ER land data using a 1951 to 1980 baseline that matched the BEST absolute temperature estimate for the hemisphere land masses. 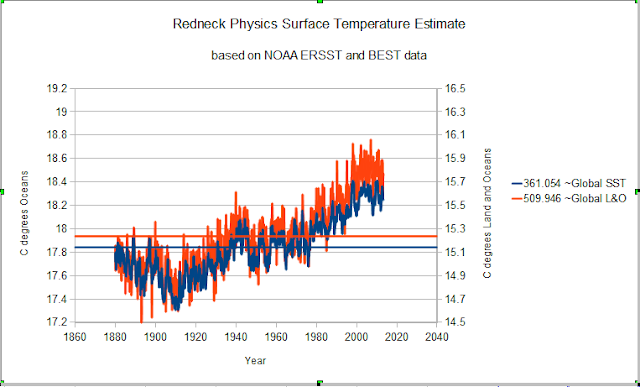 Tah Dah!  It will probably be obsolete by some time tomorrow, but there it is.  That puts the "average" absolute temperature at about 15.25C with the average SST at about 17.85 C degrees.  Depending on what you would like for your "average" period to be, you can fudge one way or the other.  Since the Land estimate uses the BEST Tave estimated absolute value, this is a mix of some average at some altitude for land with the approximate actual SST instead of some temperature 5 meters or so below the surface.  The numbers in the ledgend are million kilometers square that I used, more precise values are likely available.

The reason I did this nonsense is for this; 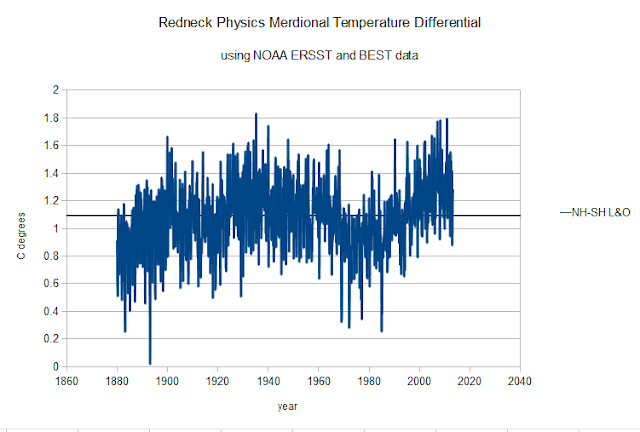 This is the meridional differential temperature using the Redneck Physics absolute hemispherical land and ocean absolute approximate average temperature.  For the period 1880 to 2013, the "average" differential temperature between the hemispheres is about 1.1 C degrees which is based on a mean surface temperature of ~15.25 C degrees.  If I smooth out some of that noise, the range is about 0.8 to 1.35 C degrees.  There is a nice swoop or hump from 1880 to 1980 which is the ~ 100 year pseudo cycle I have been trying to isolate a little more accurately.

The reason that is so interesting is that the radiant forcing down or "back radiation" at the upper troposphere to turbopause is the same for both hemispheres.  Corriolis effect tend to isolate the hemispheres somewhat in the atmospheric circulation but forces ocean heat flow north from the Antarctic Circumpolar Current.  There is mechanical pump action messing with the oh so sickeningly sweet ideal radiant "greenhouse effect".

You may notice, if you are a savvy climate fan, that the end swoop starting at about 1985 just happens to correspond with the shift in "global" diurnal temperature trends.

I just wanted to get this posted since the BEST combined Land and Ocean is supposedly due out any day now and I figure this might be interesting to compare with their results.
Posted by Unknown at 10:05 PM