This "Torturing Data" series was inspired by a rather arrogant commenter on one of the blogs.  This commenter takes the BEST Land only data fits a CO2 forcing curve to it and calls it "science".  I am not a scientist.  I was an engineer.  As an engineer, my job was to make things work or figure out why they did not work.  Engineers are in general more critical than scientists and also more optimistic in general, at least in my experience.  To a good engineer, there are no problems, only opportunities.  To become a good engineer, you likely have to learn common sense first, then get fancy. 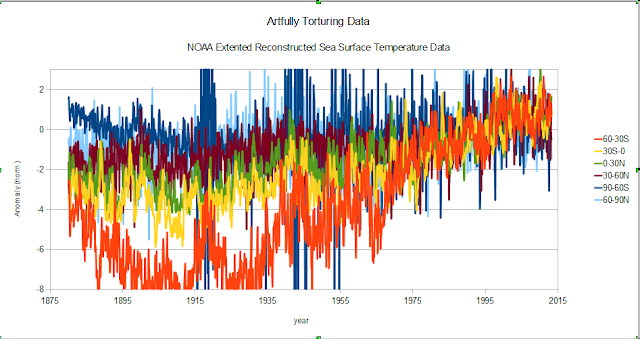 This could be considered artfully tortured data.  While that NOAA website bills the data as Extended Reconstructed Sea Surface Temperature Data, this is actually land and ocean monthly data.  All the torture required was adjusting the anomaly to the 1981-2010 satellite era baseline and normalizing based on the satellite era standard deviation.  The most current data should be the most accurate after all.  In the fore ground in orange is the 60S to 30 S combination SST and Land Surface temperature data.

I have done the same thing with the GISS regional annual data in the past to locate the most reasonable starting point.  The less noise the better.  The southern extratropical band sans the polar region is the most stable data.  Even though the data coverage is poor in comparison to the northern hemisphere, the thermal mass of the predominately ocean region of the Earth is rock solid stable.  That makes it a good reference and a good place to start. 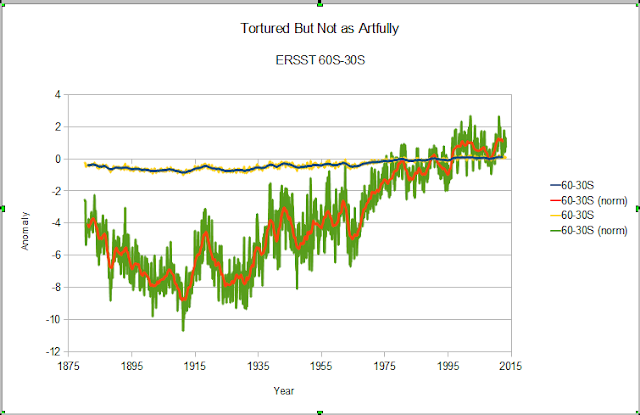 Since the standard deviation of this region is so small, normalizing tends to seriously amplify the changes.  This region with the Antarctic Circumpolar Current (ACC) has huge heat exchange potential.  As I have mentioned before, the ACC moves approximately 100 to 150 million cubic meters of salt water per second.  That is about 3 to 6 Gulf Stream Current equivalents.  A very minor change in the ACC would have 3 to 6 times the impact of a similar minor change in the Gulf Stream current. 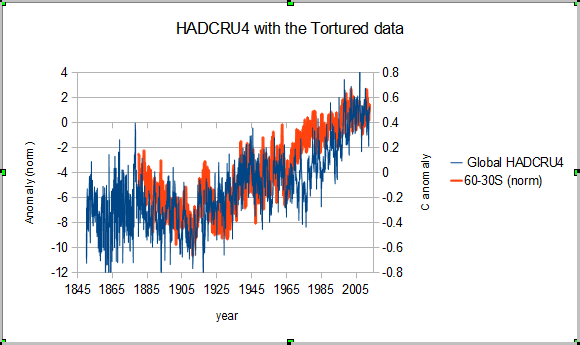 This is an overlay of the Hadley Climate Research Unit version 4 with the tortured ERSST which is actually land and ocean, but not all that much land.  There is a reasonable but not outstanding correlation, just "eyeballing" anyway.  Notice though the scale on the right side.  Somewhere in the ballpark of 1.0 C +/- a touch.  That is about +/- 0.5 C in nearly 200 years.  Since the HADCRU4 data is not perfect, that really is about +/- 0.5 C around the 160 year mean with a margin of error of about +/- 0.2 C degrees.

Now, some how scientists have taken this +/- 0.5C with a +/- 0.2 C margin of error and turned it into 3C of "Global Warming" due nearly entirely to CO2 introduced by mankind and completely discounted that tiny wiggle in a region with 3 to 6 equivalent Gulf Stream currents.

By itself, a doubling of CO2 can produce about 4Wm-2 of additional atmospheric resistance which could produce 1 C of warming.  All the additional "projected" warming requires some help with feed backs.  Until recently, the possibility of longer term recovery or other natural increases in "global" temperature which would also be amplified by the Atmospheric resistance, have been minimized if not completely ignored. 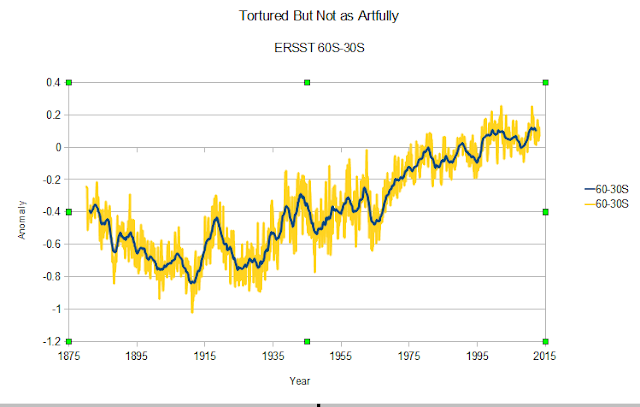 While this little band of Earth with its 3 to 6 Gulf Stream currents worth of energy has varied about +/-0.4 C +/- about 0.125 C allowing for standard error over the past 100 years.

And people wonder why engineers are so skeptical of climate scientists.
Posted by Unknown at 6:40 PM