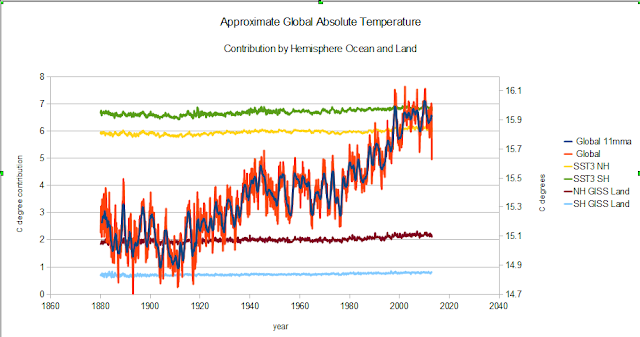 Using a 1905 start date with the full 1905 to 2012 baseline for anomaly, this chart compares the contribution of each of the hemisphere surfaces.  In other words, this is the areal weighted anomaly.  The SH oceans provide most of the warming followed by the NH Land, NH oceans with the SH land bringing up the rear.  From this "vantage" point, the SH oceans are leading the way indicating an Oceans causation for the majority of the warming.  That could be due to a number of factors with some CO2/Land use influence, but natural factors would have to be considered a major part of the "cause" if the data is reliable.  Then I may have spreadsheet errors or using my personal bias to sway your opinion.

The data is available with a simple Google of Berkeley Earth Surface Temperature, GISS temp and Hadley Center Sea Surface Temperature.  The Berkeley site provides land surface area, if it is up again, so you can easily replicate my results or find some glaring error purposefully made by a Climate Denying Skeptical Conservative etc. etc.  to cast doubt on the elegant theory that fossil fuel CO2 emissions by man are destroying the planet at an alarming rate.
Posted by Unknown at 6:53 AM