A. M. Selvam, is an Indian professor that is into chaos theory and all the associated things that go along with it.  Most of her papers include the Penrose pattern which is an example of fractals based on the Golden Ratio which is 1-SQRT(5) divided by two with is an infinitely repeating number.

This is likely not a "law" of nature, more like a convenience of nature.  If you stray too far from "normal" or Ein=Eout, you cease to exist.  The things we see in nature are still here, the Golden Ratio appears to be a reasonable limit for a "stable" system whether it is biological, mechanical, thermal or chemical.

So this post is just to stimulate some that wonder about order out of chaos to consider simple recurrent patterns in nature as references.  Well, also because of the conservation of water/energy part of the ocean puzzle.

In order for water to exist on Earth, Ein the ocean has to equal Eout of the oceans and evaporation has to equal condensation, over some reasonable time frame.  Since the clouds in the atmosphere are there because of ocean evaporation, there should be a "simple" mechanism for the clouds to regulate the energy.

With better satellite and surface data, it appears that the latent heat of evaporation from the oceans happens to equal the solar energy reflected by the clouds.

The data in this table if from the Trenberth, Fausto and Keihl 2009 energy budget which I have criticied on several occasions.  Even in their study, solar reflected energy closely match the ocean latent heat loss.

Depending on what values you use for averages, total solar energy reflected with 1361Wm-2 TSI at the top of the atmosphere with 30% albedo is 408 Wm-2.  That is roughly the equivalent energy of the average surface of the Earth.  If you use TSI/4 as your "Average" TSI, then your "average" energy reflected would be 108 Wm-2.  As a general rule though, reflected energy is equal to the stored energy.  Adding CO2 to the atmosphere would increase the potential to store energy and the system should respond by reflecting more energy.  Since clouds are the main source of the albedo, increased temperature should increase cloud cover which will offset some portion of the additional stored energy.

That is a fairly logical train of thought that required a bit of creativity to step around in order to get the higher end of climate sensitivity estimates.  If cloud albedo is directly related to conservation of energy and water in the oceans, more than just a feed back, an actual control setting, that would be interesting.  It appears to be even more interesting than just clouds.

A while back I was comparing the TSI and Albedo of various planets in our solar system.  NASA has Planetary Fact Sheets with the information I was using.  While setting up a spread sheet to compare the inner planet I made a little mistake that was comical enough to do a post on.  My mistake indicated that the surface temperature of a planet can be estimate by just the TSI times the Bond albedo.  When both the Bond and Geometric albedo are considered, even a more interesting estimate is possible.


The Bond and Geometric Albedo values and Total Solar Irradiance (TSI) are from the NASA Planetary fact sheets in the earlier link. The Ratio row is just Geometric divided by Bond albedo values.  The Golden Ratio range is 1.26 to 0.76.  Venus and Earth fit in that range and both have relatively stable atmospheres.  Mars has a thin atmosphere and Mercury virtually no atmosphere.

The Flux values are just the respective albedo times the TSI.  The Diff or difference is provided and below that the estimated surface temperatures are calculated using the Stephan-Boltzmann relationship.  Sub surface is the difference between the Bond and the Diff value.

Since the Geometric flux is based on the maximum albedo value, that should be roughly the peak equatorial flux.  For Earth the values 501.91, 418.49 and 83.42 are fairly close to the current equatorial, mean ocean and meridional flux values.  The sub-surface value of 335.06 is also very close to the "average" energy of the oceans on Earth.  For Venus, all the values are lower than the "true" surface values on Venus, but there is some indication that geothermal energy is a large portion of the energy near Venus' hard surface.  Mars' sub surface value based on this theory indicate there may be some geothermal energy impact, though not much.  Mercury has a very large discrepancy that may be due to a number of factors.  Then there is of course estimate errors and my theory may be crap.   There is some circular reasoning involved.

This is a more interesting puzzle it seems every day.  I am going to leave this as food for thought since the data for other planets is so coarse and focus on the one we have the most data, Earth. 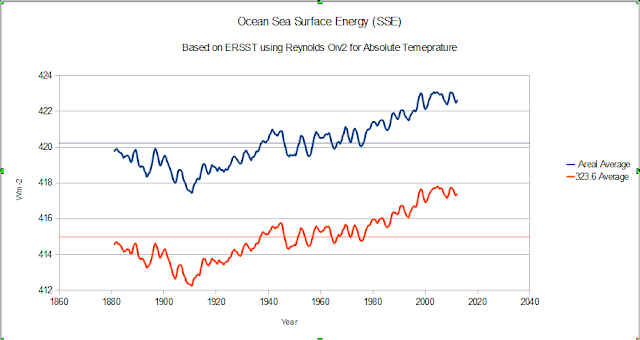 This chart shows the approximate Sea Surface Energy (SSE) based on the ERSST data set using the Reynolds Oiv2 satellite data from 1981 to 2013 for "calibration".  30 degree latitude zones 60S to 60N were used then averaged as 323.6 Average which is assuming a uniform ocean area distribution or simple average and Areal which considers the actual surface area.  The simple average has a mean of ~415 Wm-2 and the Areal Average has a mean of ~420.5 Wm-2.  Both compare well with the 418.5 Wm-2 based on reflectance using Bond Albedo.

Using the 30S-equator and 30N to equator bands, the average SSE is 449 Wm-2 and 457Wm-2 respectively, lower than the 501.9 estimated with the geometric albedo, but the bands are some what wider than what would be considered direct peak insolation.  The meridional difference in the SH is 80 Wm-2 and in the NH 73 Wm-2, some what lower than the 83 Wm-2 difference estimated with the geometric minus Bond flux but reasonable given the difference between Areal and simple averaging.

The reason for using the satellite SST for this comparison is because the actual SST and SSE is very uncertain.  According to Stephens et al., the true surface energy of the entire Earth is close to 400 Wm-2 with a +/- 17 Wm-2 margin of error.  Not having a better estimate of the absolute surface temperature appears to matter much more that most will admit.

As a reminder, to exist, energy and matter have to be conserved or Ein must equal Eout over some reasonable time period.  That requires 50% entropy, energy lost must equal work produced in an open system that is to remain stable.  The Golden Ratio appears to provide a reasonable estimate of the range of possible imbalance allowed during that reasonable time period for an open system to return to a stable condition.  If albedo can adjust to maintain that range it appears to be quite adept at doing it.

This is an observation not an attempt at a proof, but interesting none the less.
Posted by Unknown at 6:42 AM