Tropical not so Hot Spot with Tortured Data 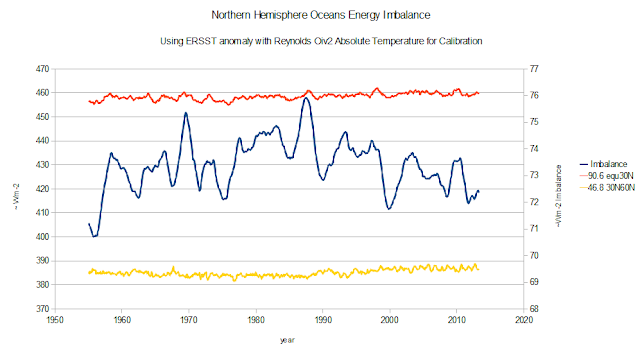 The Elusive Global Absolute Surface Temperature post was about estimating, well, that elusive global absolute surface temperature.  Surface temperature anomaly has been the chosen metric for illustrating the impacts of global warming for so long we are stuck with it but anomaly just doesn't cut the mustard for some comparisons.  Like above, the equ-30N curve is the calibrated to absolute temperature ERSST anomaly for that band of the northern hemisphere oceans converted to approximate energy, Wm-2.  The yellow curve is for the northern part of the NH oceans and the blue curve is the energy imbalance estimated between the two.  That could just be noise or it could mean something. 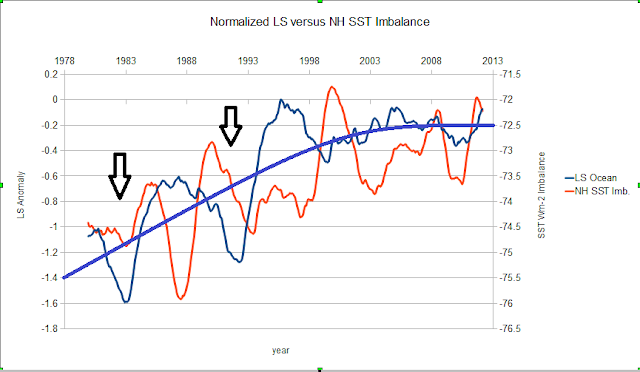 In the Tropical Hot Spot post I tried to show how much geeky fun you could have using the UAH Satellite data to find some of the missing heat that is occasionally in the Climate Science news.  Here in blue is the tortured UAH lower stratosphere (LS) data with its new friend NH SST energy imbalance.  By roughly overlaying the two, I now have a rough impact scale.  You should notice that while there are different types of noise in each series, they share the inverted decay curve.  That should mean they are approaching a common limit.  The two black arrows point to the two recent major volcanic impacts.  With both of these series smoothed with a 25 month moving average, the exact start times are blurred or smeared, but the responses are at least similarly treated.  The rough northern hemisphere impact is in the ballpark of up to 3 Wm-2 for the oceans. There is a whole lot of uncertainty, but at least there is a rough number to work with.

Last I checked, volcanoes where still "natural" forcing.  Now some would say that the "natural" forcing just "masked" the impact of AGW.  With more evidence that the "system" is approaching a common limit, that logic is compromised.  The story may get even more interesting.