More Rehashing of the Obvious OHC and the Stratosphere

The oceans of the world have a huge thermal capacity.  Just like any capacitor, the oceans will have a response curve associated with changes in that thermal capacity.  The shape of the charge curve does not have to be the same as the discharge curve and in fact rarely is the same.  You can short a battery and it will discharge much quicker than you can charge the battery unless you have an infinite power supply in your tool box.  If you happen to look at the coefficient of heat exchange between air and water, you will find that the rough "average" ratio is 100:1 water to air.  It is easier to discharge heat energy stored in water to air than it is to discharge energy stored in air to water.  So "charging" the world's oceans with heat stored in the atmosphere is not a quick process. 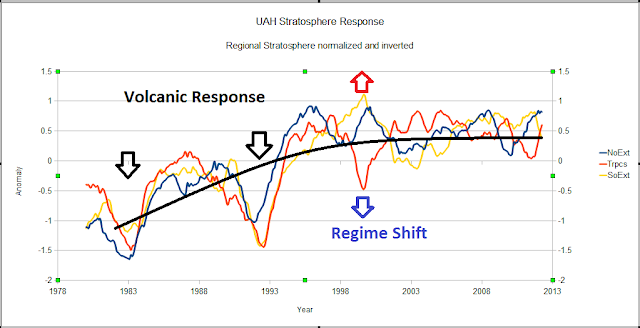 We have temperature data for the Stratosphere which has a much lower heat capacity than the oceans and lower atmosphere.  That makes the Stratosphere a good "Wattmeter".  The energy transferred through the Stratosphere would vary proportionally with the temperature T raised to the 4th power.  Because of different energy absorption spectra, that is not an exact relationship, but close enough to be useful.

The chart above is the Stratosphere temperature anomalies for the indicated regions normalized by dividing by the standard deviation and invert to correlate with ocean heat capacity.

So if your geeky friends show you a reconstruction of ocean heat uptake with some exponential rise intended to intimidate, just mention the Stratospheric "Wattmeter" to them.  They will have obviously neglected this piece of information since it either goes against their agenda or they are clueless.
Posted by Unknown at 8:22 AM