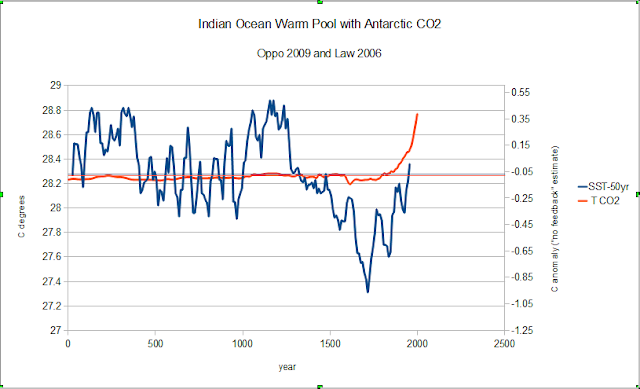 
This is another project I will never finish.


When I play with the paleo I notice there are quite a few issues finding reliable reference "regions" since ocean currents vary and many of the "bugs" that are used as proxies tend to drift with currents and have optimum temperature zones.  Long term CO2 reconstructions are severely limited to the Antarctic ice domes because melt at other locations tend to limit time and accuracy.  The Southern Hemisphere though doesn't look like it is a very good "global" reference if land surface temperature is the metric used to determine the degree of "global" warming.  Since most of the ocean paleo reconstructions seem to indicate that there are out of phase cycles or pseudo-cycles between the hemispheres, temperature at some surface over land and at higher altitude doesn't seem to accurately indicate the actual changes in energy of the climate system.  I call this land "amplification" though it could be related to "phantoms" in the temperature records caused by the huge amount of noise in the land based temperature proxy and surface stations. 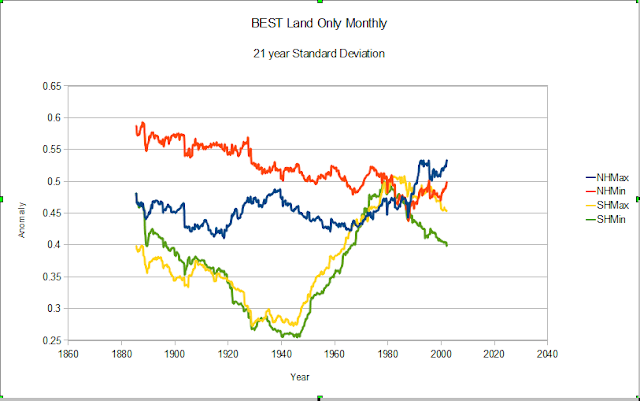 This chart plots the running 21 year standard deviation of the BEST Monthly Maximum and Minimum temperatures by hemisphere.  Individually, there appears to be some significant issues especially in the Southern Hemisphere.  That ~1950 to 1980 increase in standard deviation just doesn't look right and the surface station cover "down under" is not the greatest.  Basing a large part of your "correlation" with CO2 forcing on noise would not be a great career move.

Now there has definitely been "global" warming, but with individual location proxy reconstructions showing today's temperatures are not all that exceptional over the past 2000 years.  The warming from the depths of the last little ice age is some what exceptional based on the Oppo data.  I have included a "no feed back" temperature curve based on the Law Dome 2000 year CO2 reconstruction, use the full period "average" for each for alignment.    That indicates that CO2 all by itself "may" be responsible for ~0.35 C of the warming but the margin of error looks to be quite large.

Anyway, this is just a quick post to serve as a reminder for me of things I might think about finishing.
Posted by Unknown at 6:29 PM