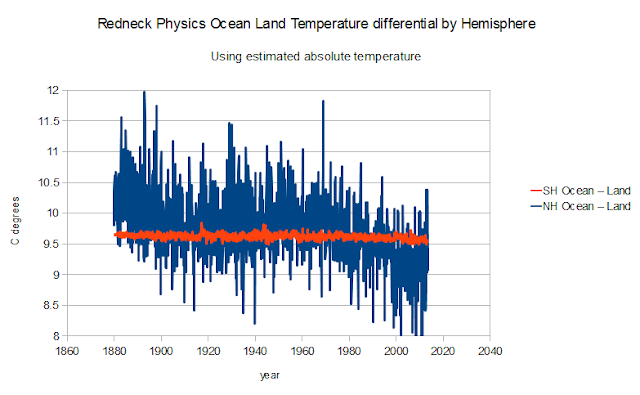 In blue is the northern hemisphere oceans and land temperature differential.  There is about 100 million kilometers squared of land in the northern hemisphere and a much small fraction is covered by ice of any depth.  It should be pretty obvious that the two hemispheres respond differently to all forcing.  Assuming that the "Global" temperature will respond uniformly to all forcing would appear to be a fantasy over time period less than thousands of years.

If you would like to estimate how much impact there will be with increased CO2, it would seem to be wise to consider the MAJORITY of the surface of the Earth.

Using CO2, both directly measured at Mauna Loa and estimated based on fossil fuel land use to 1800 AD, this chart indicates that with the exception of the northern hemisphere land, the "sensitivity" to CO2 forcing is approximately 1.6C per doubling using my Redneck CO2 Tracer simple "fit".  That "fit" does not include longer term change in climate.  Since prior to the modern instrumental era it is rumored that there was a little ice age, some portion of that "sensitivity" could be due to a long term "persistent" increase in ocean heat capacity.

The real question should be how much and how long has there been long term persistence since regional paleo indicates that there has been throughout history.  "Globally" the surface temperature may be stable, but mankind lives mainly in the northern hemisphere. 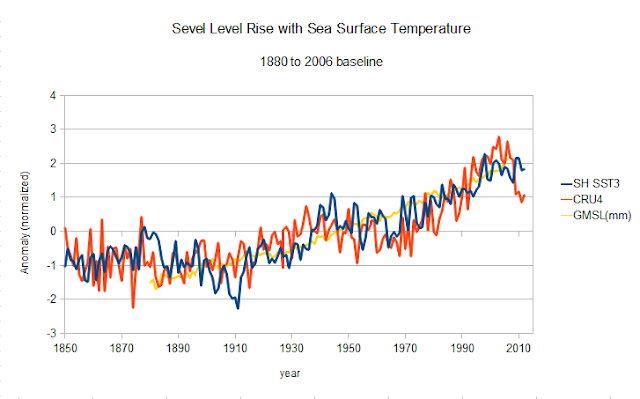 Sea level rise appears to indicate that there is considerable long term persistence.  Unfortunately, with statistical massaging you can find anything you would like.  Selecting an anomaly baseline that is too short or on an upslope/downslope skews your results to that period.  If you select an anomaly baseline that is too long, you lose most of the information.  When you compare too short with too long you get fruit salad.  This chart uses the full global mean sea level data with an anomaly baseline from 1880 to 2006, the full length of the CMAR data set then it is "normalized" by dividing by the standard deviation for that baseline period.  Using the same procedure on the ERSST data and Hadley Center CRU4 Global data set, this is what you get.  Sea level, SST and Global Mean Temperature Anomaly all indicate that there is long term persistence.

Of course if I select an different shorter baseline, the results vary considerably. 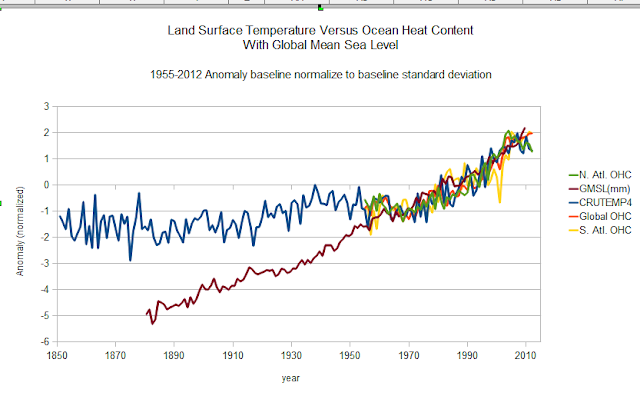 Here by using the 1955 to present baseline I get a nice hockey stick.  The hockey stick market is cornered, so I doubt that I can make any money trying to scare the little kiddies of the world with this, though it is a great method to use for Cli-Fi fiction.  This post outlines the methods and should provide any links I have missed.

There is a wealth of real science published that deals with the long term ocean driven climate pseudo-cycles which I find much more fascinating and believable than the Cli-fi hockey sticks. To each his own though.