UPDATE: More stuff at the end

Since the ocean data has less conversion issues, it is definitely a lot easier to work with.  Sea level is pretty much fixed and for the satellite era we have actual surface and layers to deal with.  So on the way to hopefully bigger and better things, this post expands on the "layers" method of teasing out sensitivities to different forcing events. 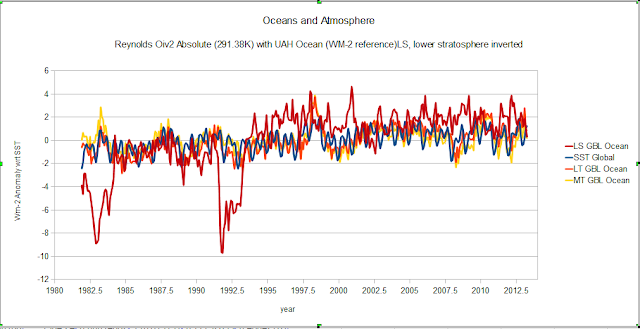 Globally, there is no seasonal signal in any of the data.  Averaging globally natural smooths the season "signal".  When only hemisphere data is used, the Reynold's Oiv2 data has a strong seasonal cycle which needs to be removed for simple chart comparisons.  The satellite data doesn't have a significant season signal, so that has likely been removed before the data published online.  So the Hemisphere and other comparisons have a few more steps and more places for me to screw up. 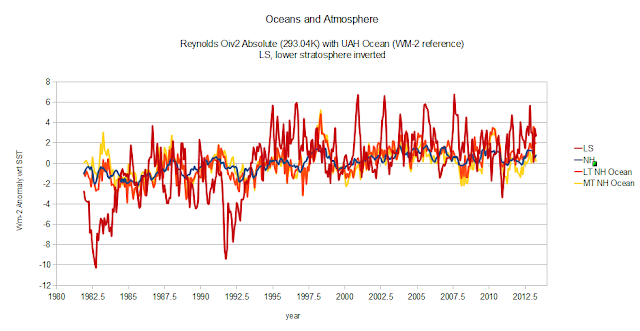 So here is what it looks like.  For the Reynold's Oiv2 SST data the average of each month for the entire period is determined, the average of the entire period subtracted from the month averages producing a seasonal signal which is subtracted from the monthly values of the entire period.  Not as complicated as it may sound, all it is is removing the season anomaly leaving the absolute value intact.  Since that procedure was performed on the SST data, the same was performed on the others though the remaining season signal was small in the UAH data.  If the Reynold's Oiv2 and UAH had the same start date, there would likely not have been any residual seasonal signal at all.  I will try to add a spreadsheet later if anyone is extremely bored.

The result is a comparison where the actual forcing changes can be compared.  Some rescaling may be required, but it provides a reasonable picture of how the Stratosphere anomaly is an amplification of surface energy flux variation. 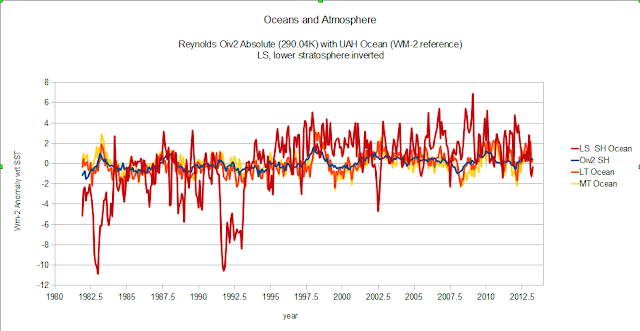 Here is the Southern Hemisphere done the same way.  The two volcanic events are obvious so I didn't include arrows.  In the NH and SH the peak forcing based on this reference method is about 10 Wm-2.  The Global peak is slight lower, closer to 9 Wm-2.  That difference is likely due to the seasonal signal removal either in my spread sheet or in the UAH process.  It is a indication that the accuracy of this method cannot be better than 1 Wm-2, though it is likely considerable worse than that.  What is most interesting is that the forcing of the two volcanic events is about the same in this comparison where the typical forcing estimates have the 1991 Pinatubo event being much larger than the early 1980s El Chicon event.  Estimates of direct and indirect volcanic aerosols are not proving to be very accurate and this coarsely confirms that they are off a touch.  In any case, this fairly simple comparison using an absolute temperature reference instead of temperature anomaly looks like it can get within a couple of Wm-2 of actual variations in atmospheric forcing. There are of course multimillion dollar platforms to do this "better", but it is kind of neat seeing how much can be done with some of the longer term satellite data series.

Now don't get too excite sports fans, there is still a CO2 signature in there, it just looks a lot lower that those fat tail estimates. 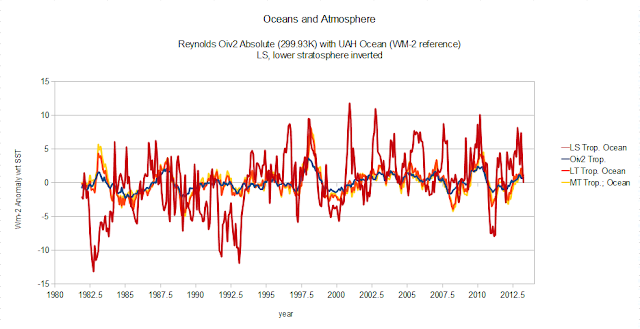 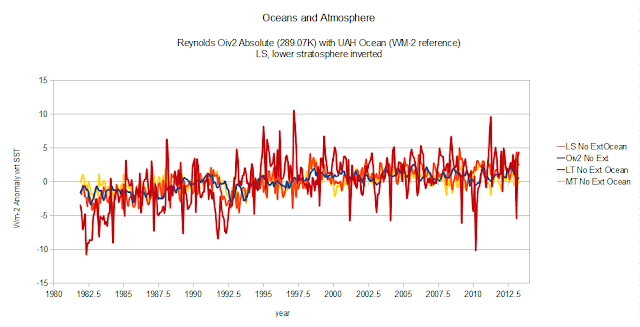