A new paper is generating a lot of press with the typical "unprecedented" warming not seen in this case nearly in 44,000 years, though the authors did notice a 5,000 year old "precedented" warming.  The temperature proxy in this case was moss of the reindeer snacks variety.  The cause is of course CO2 since that is the only "simple" explanation.

The story goes that some 11,000 years ago the summer sun that shines on Baffin Island near Greenland was 9% warmer than it is today.  That is because the Earth has a little tilt and an elliptical orbit that causes the stronger currently winter sun, being closer this time of year in the Southern Hemisphere to switch to stronger in the northern hemisphere in another ~11,000 years.  In about 5,000 years the Southern Hemisphere Spring will be warmer than Fall while Northern Hemisphere Fall will be warmer than the Northern Hemisphere Spring.  This causes roughly four standard seasonal modes and mankind has only been taking notice of a portion of one so far.  The paper ignores the more subtle Spring/Fall modes and just concentrates on the NH hot, NH not so hot modes.

Unfortunately, the Baffin Island location near Greenland means its climate is inspired by the North Atlantic portion of the ThermoHaline Circulation (THC) which gets much of its flow from the Southern Hemisphere's Antartic Circumpolar Current (ACC).  This causes the North Atlantic SST temperatures to be out of phase with the general glacial mass of the high northern latitudes.

The four precessional "modes" plus the ACC out of phase lag produces fairly regular "pulses" in Global Climate likely stimulating  Bond Events every 1470 +/- 500 years noted in NH ice cores and in the tropics and Southern Hemisphere orbital harmonics of ~4000 years, 5000 years and 5800 years depending on the lead/lag of the Bond Events relative to the precessional four mode pulses. 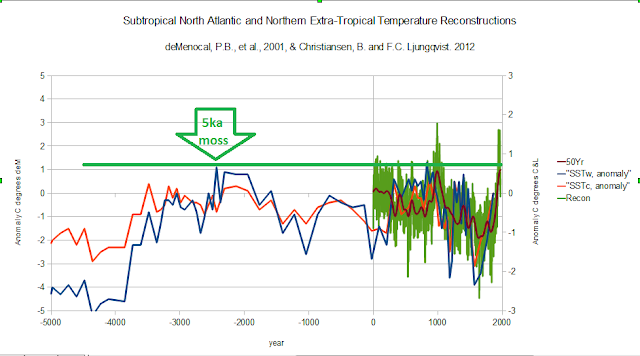 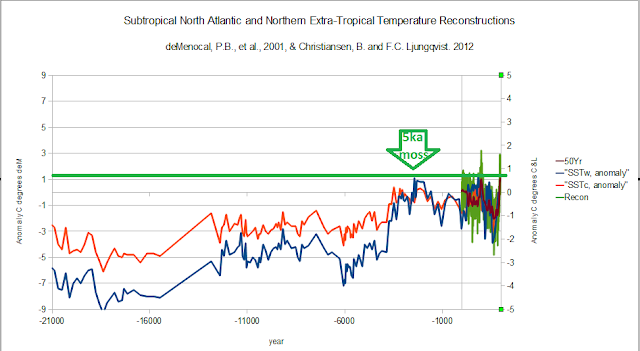 The de Menocal et al. goes back to ~21,000 BC with one hiatus making it hard to see the "pulses", but around 7000 BC there was another pulse with a drop following.  So from the 5ka moss pulse back at least another 10,000 years there would not have been any other Baffin Island ice loss likely due to ACC influences.  Higher solar irradiance could, but if the snow/ice is clean, it would tend to reflect most of the solar energy.

So while I am sure that the mother of the paper's author would be proud of the effort, it is a bit hard for me to swallow the magical leap to CO2 done it without at least addressing why there is a Baffin Island Moss Barrier that tends to agree with more complex "Global" dynamics and Bond Events than his over simplification.

Since the older moss age falls into a range between interglacial cycles, this Tierney et al reconstruction tends to show the "pulses" better and roughly places the "pulse" prior to the old moss around 54,000 years before present.  So we could have a moss barrier around the 5 ka and today North Atlantic SST or pick any number you like.

This shorter version of the Tierney et al with OpenOffice default smoothing nicely shows the pulses and the weakly damped decay following.  Unfortunately, paleo absolute temperature appear to not be reliable but they do tend to show the "norm" +/- a degree or so quite well.

The data made available by the authors noted on the charts can be downloaded at NOAA/Paleoclimateology
Posted by Unknown at 9:33 AM