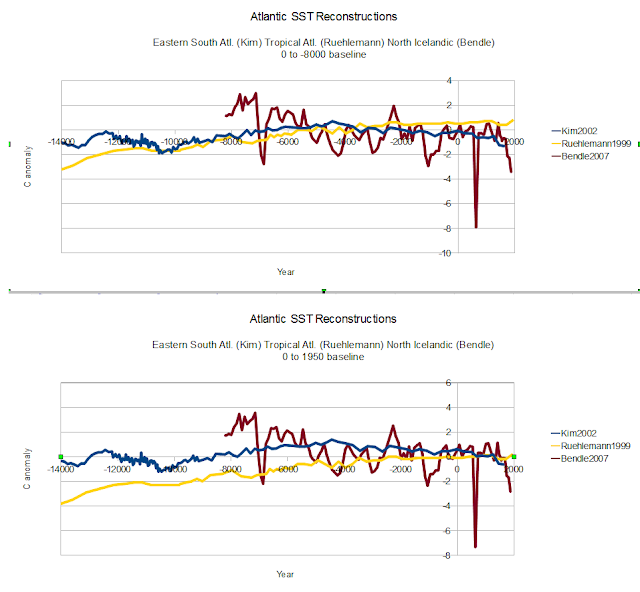 The plots above show three Holecene period SST reconstructions for the Atlantic Ocean with the principle author's name and published data as listed on the NOAA Paleo website I used to download the data.  Since the freshest data should be the better data, I used the "present" value of 1950 to year zero for the baseline on the bottom chart and on the top chart I used year zero to -8000 as the baseline on the upper chart.  Which do you think is closer to reality?

The Kim 2002  data is specifically selected, because it shows just what I wanted it to show, that there hasn't been a heck of a lot of change in the Tropical Atlantic Ocean for some time.  The other two I just picked because they were in the North and South Atlantic because just about any reasonable paleo SST reconstruction will show a fairly large amount of variability as you approach the poles.  I can say with great confidence that today is about as warm as it has ever been in the past 8000 years.

I could dwell on the downtick of the Bendle 2007 reconstruction or the uptick in the Ruehlemann 1999 reconstruction, but that would just be picking nits since neither have the absolute accuracy over the entire record to discern a quarter of a degree one way or another.  The Bendle 2007 by the way is a much smaller ocean area than the others so it would require less weight and I didn't weight any of the reconstructions.

If I included a few noisy tree ring reconstruction, I could have a much more noisy plot with not a heck of a lot more information.  Since the Northern and Southern Hemispheres tend to be out of phase on various time scales, I could average all the information away.